Carbonomics: Why Caps Won’t Work, But Carbon Taxes Will

Carbonomics: How to Fix the Climate and Charge It to OPEC is a new book aimed at bringing together those concerned with climate change and those concerned with energy security. It shows that carbon taxes work best for both concerns and that caps drive the two sides apart.

Carbonomics analyzes cap-and-trade problems, including many covered by the Carbon Tax Center, as well as these: 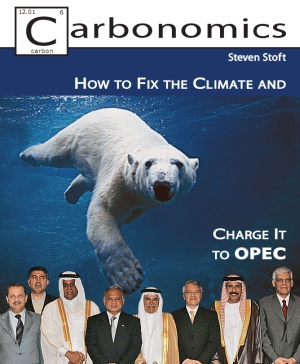 (1) Cap and trade puts the same price on all carbon – permits for oil carbon are interchangeable with permits for coal carbon and other carbon. So cap and trade does not put any price on the costs of oil shocks and oil security (for example, military expenditures to secure oil supplies and shipping lanes). This slights the concerns of those focused on these issues.

(2) Many of those advocating a binding U.S. cap on carbon see it as a step toward getting China and India to adopt binding caps. But China and India have been rejecting binding caps for 15 years – for good reasons. Although China has passed the U.S. in total carbon emissions, on a per-person basis China’s emissions are still far below ours. Requiring China to hold its emissions to their 1990 level would be like capping the U.S. at a pre-1900 level in terms of emissions per person.

(3) Caps make individual and local carbon emission reduction efforts useless, since emissions will still reach the cap. Reduce your carbon footprint – perhaps by buying a super-hybrid – and you’ve just made more space under the cap for someone else to buy an SUV.

Special, adjustable tax rate for oil. Oil’s two costly side effects – climate damage and security costs – call for a higher tax rate for oil than for domestic coal. This is difficult to accomplish under cap and trade. Further, an exception to this higher tax rate should be made when OPEC helps push the price to $140 per barrel – that’s higher than needed for climate and security together. An oil-specific tax can be easily dialed back in such circumstances – while again this is difficult under cap and trade. Then again, when the world price of oil drops precipitately – as it did after its peak in July 2008 – a floor price is essential to protect investments in everything from hybrid cars to new cellulosic ethanol plants.

Base a climate agreement on equal effort. China has said it is willing to make a binding commitment. Committing to the same carbon tax rate as the U.S. means there is nothing stopping China from becoming as rich as the U.S. And, rather than negotiating 180 separate caps – one for each country – it will be easier and fairer to require such an “equivalent level of effort” (tax rate) from each country. Carbonomics anticipates a flexible implementation; if a country wants to base its own policy on cap and trade it need only ensure that its permit prices have as much force as the required international tax rate.

Reward all emission reductions. A carbon tax rewards any carbon savings. If you buy a more efficient hybrid, you save money. And a would-be SUV buyer doesn’t get a break – they still face the same incentive to avoid an inefficient vehicle.

While the issue of cap and trade versus carbon taxes is central to Carbonomics, the book covers many related issues: (1) PastOPEC crises show that carbon pricing works wonders. (2) There’s still room for an automotive fuel efficiency incentive, in the form of a “race” that rewards improvements. Such a “race to efficiency” is a lot more like a tax than a cap or traditional regulation. (3) Synfuel subsidies are decidedly not a joint solution to climate change and energy security concerns. (4) What type of research is worthy of government funding? (5) The dangers of using cap or tax revenues for subsidies. (6) And much more. Carbonomics also advocates a particular kind of carbon tax – one that is fully refunded on an equal per-person basis, as put forward by NASA climate scientist James Hansen. Carbonomics argues that such a revenue-neutral tax is the only carbon policy that can succeed.

OPEC photo by Kamran Jebreili/AP Images. The polar bear photo is owned by the Aflo Company, which provides no information about the bear, although it is almost certainly in a zoo.

Steve Stoft and Dan Kirshner are economists based in Berkeley, California. Carbonomics: How to Fix the Climate and Charge It to OPEC  is available on Amazon, and can be downloaded for free from stoft.com.