Reported by CTC Washington representative James Handley. Watch this space (and see postscript below) for CTC’s analysis of the USCAP "Blueprint." Meanwhile, read these parallel critiques of USCAP:

The U.S. Climate Action Partnership unveiled its cap-and-trade-based Blueprint for Legislative Action to a half-empty House Cannon Caucus Room Thursday morning. Arriving at the 9 a.m. event, attendees viewed a podium in front of an array of 18 chairs (each with bottled water) marked with names of CEOs and heads of EDF, NRDC, Pew Center, Nature Conservancy and WRI.

At 9:20, the suited “chorus” filed in, taking their assigned places. General Electric CEO Jeffrey Immelt introduced what he described as a “diverse panel” of CEOs and NGO heads. (All but Ursula Burns of Xerox is white; all but three are male. All seemed past the half-century mark.) 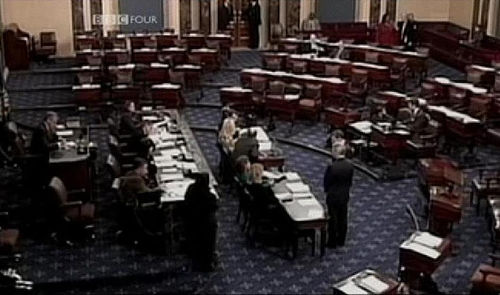 Each had a brief speaking role. Jonathan Lash of the World Resources Institute stressed cap-and-trade’s “flexibility and predictability,” saying the blueprint addresses impacts on consumers and includes provisions for emissions offsets to “limit volatility.”

According to the Environmental Defense Fund’s Fred Krupp, “A mandatory cap is the backbone” of USCAP’s proposal to reduce US greenhouse gas emissions from 2005 levels by 80% by 2050, with half the reductions occurring by 2030.  Charles Holliday of DuPont said the plan would maintain competitiveness of U.S. firms. David Crane of NRG Energy touted its “fairness” in “spreading costs through the economy.”  “All components of the plan are linked,” Pew’s Eileen Claussen proclaimed. To “manage price spikes” she pointed to provisions for “banking of emissions allowances,” availability of “strategic verifiable offsets” and a “reserve pool.”

John Deere’s Robert Lane stressed offsets -– credits for 1.5 billion tons of CO2 reduction activities that would not otherwise be undertaken in sectors not subject to the cap. He noted that USCAP’s blueprint allocates “free permits initially… phasing them out.”  John Rowe of nuclear giant Exelon trumpeted renewable portfolio standards for utilities to encourage building “the lowest carbon energy” — nuclear. He said 40% of the free allowances would go to electric utilities at the distribution level — where, he asserted, cost savings would be passed to consumers.

Burns described Xerox’s early GHG emissions reductions and pointed out the blueprint’s rewards for early actions. Frances Beinecke of the Natural Resources Defense Council called the blueprint a way to “help solve both the economic crisis and the climate crisis” by “regulating all major sources, while funding energy technology research and deployment,” a “stimulus,” she said, along with clean fuel vehicle regulations.

Jim Rogers of Duke Energy, the third largest U.S. coal-burner, asserted that “We must find a way to remove CO2 emissions from coal,” noting accelerating construction of coal fired power plants in China. He touted the blueprint’s use of auction revenue to fund Carbon Capture and Sequestration research, funding “not subject to the whims of Congress.” He said the blueprint would “require” all new coal fired power plants after 2015 to capture at least 50% of carbon.

Peter Darbee of Pacific Gas & Electric noted that energy-efficiency is the most cost-effective energy “source” and the cheapest way to reduce GHG emissions, costing about 2 cents per kilowatt-hour. The blueprint urges Congress and states to enact regulatory standards, expand rebates for buildings that outperform codes, and enact tax and regulatory incentives for consumers to improve efficiency. Darbee urged “decoupling” of utility earnings from power generated to encourage them to help customers conserve. James Mulva of Conoco-Phillips explained that the USCAP blueprint makes fuel providers “responsible” for reductions in the transportation sector and that it includes performance measures for vehicles.

Reporters asked about the cost of the plan. Claussen contended that its costs can’t be assessed in isolation because the plan would revitalize a new economy — for example, by encouraging building of wind power. I asked the panel why the blueprint didn’t follow President-elect Obama’s pledge of 100% auction of permits and instead sought permit giveaways ("allowances"). Darbee replied that the free permits would go to electricity distribution utilities, which would ensure that consumers benefited from them.   A reporter from Time magazine asked what the target carbon price would be; Claussen said a Carbon Market Board would decide, and that the plan is intended to avoid “a dash for (natural) gas.”

Another reporter asked about EPA authority and federal preemption of state efforts already underway to reduce GHG emissions; Krupp replied that they had not taken a position on EPA or preemption. Asked if coalition members will support the plan jointly or lobby individually, the panel indicated that there will be agreements on some elements and divergences on others.

WRI’s Lash concluded the session: “The economy will recover but without serious steps, the climate will not.” The panel then rushed out to join the first climate legislation hearing of the 111st Congress, before Rep. Waxman’s Energy & Commerce Committee.

Offsets (1.5 billion tons domestic and 1.5 billion abroad) overwhelm the cap.  When the smoke clears, USCAP’s blueprint amounts to a source of funds for offsets.  Retaining tropical forests as carbon sinks instead of burning them is crucial (and deserves funding), but USCAP would sell "indulgences" for U.S. emissions without "repentance": no reason to reduce.  (See Hill Heat’s graph showing the huge bubble of additional emissions that USCAP’s offsets would accommodate.)

A "cap with free allowances" worked for the acid rain SO2 cap-and-trade program by pressing utilities to install scrubbers and shift to low sulfur coal without passing SO2 permit costs through to consumers.  CO2 is different– we don’t have a way to burn coal without producing CO2.  (Yes, we might someday, but even DOE’s rosy estimates say capture and sequestration would require ~ 1/3 more fuel.)

Conservation is the cheapest "source" of energy and GHG reductions.  Gradually-rising prices, via a tightening cap without free allowances, or better yet a rising carbon tax, would push all levels of the economy to become the laboratory for efficiency and low-carbon innovation.  For a strong enough price signal without crippling the economy, an offsetting tax shift or "dividend" is needed to dampen the "income effect" (but not the incentive to conserve or substitute) of that price hike.  That’s where auction money (or carbon tax revenue) should go: all the way downstream to households.