Making the Case for a National Carbon Tax

After the resounding defeat of the Boxer-Lieberman-Warner cap-and-trade bill last spring, the carbon tax has emerged as a viable competitor to a cap-and-trade system. As Congress begins to ponder climate legislation widely expected in 2009, advocates at today’s briefing made the case for taxing carbon as a more effective and economically viable way to curb emissions while stimulating the economy. They argued the considerable revenues carbon taxes would raise should be revenue-neutral, and be returned to taxpayers either through direct distribution or cutting taxes such as payroll taxes. 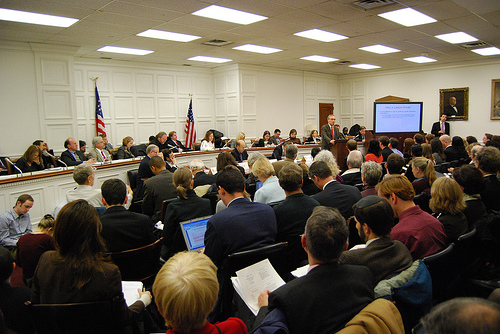 The public briefing for members of Congress and their staffs was sponsored by the Environmental and Energy Study Institute (EESI), the Carbon Tax Center, the Climate Crisis Coalition, Friends Committee on National Legislation and Friends of the Earth.

“A price on emissions that cause harm is essential,” said Dr. James Hansen, Director, Goddard Institute of Space Studies, National Aeronautics and Space Administration and a leading voice on understanding and redressing climate change. He urged “a carbon tax on coal, oil and gas… applied at the first point of sale or port of entry” to encourage fuel conservation and switching to low-carbon alternatives.

“A Carbon tax with 100 percent dividend [direct revenue distribution to individuals] is needed to wean us off fossil fuel addiction,” Hansen argued.

“Tax and dividend allows the marketplace, not politicians, to make investment decisions. It is also non-regressive. Low- and middle-income people will find ways to limit their carbon tax and come out ahead. Demand for low-carbon high-efficiency products will spur innovation, making our products more competitive on international markets. Carbon emissions will plummet as energy efficiency and renewable energies grow rapidly. Black soot, mercury and other fossil fuel emissions will decline.”

Rep. John Larson (D-CT), recently elected as chair of the House Democratic Caucus and the sponsor of a carbon tax bill introduced into the House last year, hosted the briefing. He said, “Climate change is the great challenge of our time. As we in Congress tackle this challenge it is important that we not just pass legislation, but pass the right legislation. What I have proposed is legislation that would tax bad behavior like polluting and return that money to average Americans through a payroll tax reduction. Any legislation will create winners and losers. In this case, the winners should be the American people.”

Economist Gilbert Metcalf of Tufts University, author of A Green Employment Tax Swap: Using A Carbon Tax to Finance Payroll Tax Relief, recommended a carbon tax just under $17/ton of CO2. This would nearly double the average price of coal, the most carbon-intensive fossil fuel, leading to fuel substitution and process improvements that would reduce coal burning by 32%. Petroleum products would increase in price by nearly 13% and natural gas by just under 7%, he estimates. Metcalf advocates dedicating carbon tax revenues to eliminate the payroll tax on the first $3,660 earned by each worker. He calculates that this would equate to an average 11% reduction in payroll taxes, with greater percentage reductions for lower-paid workers. Payroll tax reduction would stimulate job growth, something the economy now urgently needs.

Robert Shapiro, former Undersecretary of Commerce, now head of SonEcon, a Washington, DC consulting firm, and co-chair of the U.S. Climate Task Force, criticized cap-and-trade proposals as clumsy, complex, volatile and ineffectual ways to tax carbon emissions: “The only reason anyone is talking about cap-and-trade now is because the U.S. (at Al Gore’s urging) insisted on cap-and-trade in Kyoto [in 1997]. Mr. Gore has since abandoned cap-and-trade and is now calling for a carbon tax to replace other taxes. Caps just aren’t working.”

Under the European Union’s carbon cap, CO2 reductions have been “negligible and very costly,” Dr. Shapiro said. Exemptions (e.g., for coal-fired power plants in Germany) “overwhelm the cap.” China and India have strongly rejected cap-and-trade. In contrast, he argued, a U.S. carbon tax would encourage our trading partners to tax carbon themselves to avoid forfeiting revenues on their exports to us (WTO rules would otherwise permit the US to tax imports for carbon).

Like most economists, Shapiro said he strongly prefers price-based policies such as carbon taxes, to quantity-based carbon caps, because the taxes are simple and predictable as well as difficult to evade. A cap on quantity necessarily makes energy prices more volatile, and the resulting price spikes are economically disruptive, harming productivity and undermining support for the system. For example, Shapiro noted that Southern California’s “RECLAIM” cap-and-trade system for smog emissions crashed due to price spikes during the state’s electricity crisis.

James Hoggan, a public policy specialist from British Columbia who chairs Canada’s Suzuki Foundation, outlined the steps leading to British Columbia’s successful implementation of its carbon tax in July, and explained the national dimensions of the carbon tax in Canada. “The Canadian experience with carbon taxes is politically daunting: a federal party that proposed such a tax just lost a fall election, and a provincial party that introduced a carbon levy last summer faces potential defeat next May. But close analysis shows these politicians got in trouble not for what they did, but for how they did it.”

From Canada’s experience, Hoggan drew the lesson that emphasizing “revenue recycling” or the revenue-neutral configuration of the carbon tax helps distinguish it from conventional taxes and garners more public support. He cited polling data suggesting that a majority of Canadians support a transparent revenue-neutral carbon tax as evidence that carbon taxation could be popular with voters.

The Carbon Tax Center was launched in January 2007 to give voice to Americans who believe that taxing emissions of carbon dioxide — the primary greenhouse gas — is imperative to reduce global warming.

The Environmental and Energy Study Institute is a non-profit organization established in 1984 by a bipartisan, bicameral group of members of Congress to provide timely information and develop innovative policy solutions that set us on a cleaner, more secure and sustainable energy path.

The Climate Crisis Coalition was founded in 2004 to create awareness and convey a sense of urgency about the climate crisis and broaden the constituency of the climate action movement. Its approach to climate change links issues of environmental, social and economic equity.

The Friends Committee on National Legislation is the largest peace lobby in Washington, DC. Founded in 1943 by members of the Religious Society of Friends (Quakers), FCNL staff and volunteers work with a nationwide network of tens of thousands of people from many different races, religions, and cultures to advocate social and economic justice, peace, and good government. FCNL is nonpartisan.

NOTE TO EDITORS AND PRODUCERS: Experts quoted in this press release are also available for phone or in-person interviews. Interviews may be requested by contacting Stephen Kent, skent@kentcom.com (914) 589-5988.