A special report for the Carbon Tax Center by James F. Handley

For almost four decades, the powerhouse Natural Resources Defense Council has stood as the green movement’s stronghold for regulation-based eco-solutions. It has fought for, and won, energy-efficiency standards for appliances, cars and buildings; renewable-energy quotas for electricity supply; and parts–per-million regulations on chemicals in water, air and food have been NRDC’s stock-in-trade. But not price-based mechanisms like gasoline taxes, congestion tolls and carbon emissions pricing.

It was striking, therefore, to read NRDC finance advisor Andy Stevenson come out swinging for carbon emissions pricing. In Why Putting a Price on Carbon is Fast Becoming an Economic Necessity, posted this week on NRDC’s Web site, Stevenson warns that tightening
credit markets threaten to strangle investment in alternative energy. His solution — “cap and invest”:

The cap forms a limit on the amount of CO2 that can be emitted in a given year. This declining limit is then broken up into permits… auctioned off to emitting entities, creating a… revenue stream of roughly $150 billion a year over several decades that can be used to help collateralize the loans needed to put America back to work and move us in the right direction…. [O]ver a trillion dollars in the early years of a "cap and invest" program… to help finance innovative energy solutions for our economy… giving the banks confidence to once again finance longer-term investments at reasonable interest rates. Investments that will pay dividends both in terms of their economics under a carbon cap, as well as for their ability to help reduce our greenhouse gas emissions profile.

Once sufficient capital has been deployed to jump-start emerging energy technologies, this program would then be transformed from a "cap and invest" program into a "cap and dividend" program that would rebate energy revenues back to the American people.

We like that last piece, “dividend… to the people.” Why not start there? 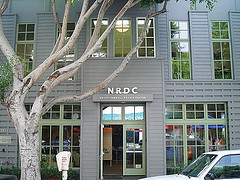 Stevenson’s article suggests that NRDC is moving up the ladder from Boxer-Lieberman-style cap-and-trade towards "the gold standard" of a revenue-neutral carbon tax. Could the Council be following the progression laid out in the Congressional Budget Office’s “Caps vs. Taxes”
report, of steps to make cap-and-trade more effective (and more like a carbon tax)?

NRDC’s proposed cap-and-trade includes 100% auction and a loose safety valve. With Stevenson’s call for eventual revenue recycling, the group is at least contemplating the first three of these steps.

Yet the NRDC-Stevenson "evolutionary" approach of moving to cap-and-dividend only after a long incubation in cap-and-invest is riddled with problems. For one thing, once traders and polluters owned permits they’d be invested in the system. They’d have to be bought out to take the next step up the ladder toward the "gold standard" of a straight carbon
tax. Moreover, "green energy" subsidies are addictive, even if (or especially when) they don’t reduce emissions. Subsidies for corn-based ethanol — which Sen. McCain denounced in the Sept. 26 presidential debate
—– are a case in point.

Furthermore, a dividend or tax shift seem essential to counteract the income impacts of any carbon pricing scheme, whether tax or cap. Without revenue distribution, carbon emissions pricing is a regressive tax. Yet under either a cap or a tax, carbon prices will have to rise substantially to meet the emission reduction targets NASA’s Jim Hansen and most other climate scientists warn are essential to prevent catastrophic climate instability. The current financial meltdown cries out for a dividend or a tax shift over a regressive tax increase, since consumers are already being bled dry.

But the case against cap-and-invest would be strong even in flush times. Our government is lousy at choosing technology winners, particularly this early in the technology race. Remember synfuels? Lieberman-Warner was loaded with subsidies for similar money holes like nukes, ethanol, and “clean coal.” Carbon auction or tax revenue diverted to "green energy" programs, even well-crafted ones, is unlikely to drive conservation and innovation nearly as well as the steeper price increase on fossil fuels that could be politically and economically sustained if a broadly distributed dividend or tax shift were coupled with a tax (or cap) on carbon fuel producers. That’s because we know our homes and businesses better
than the government. With the right price signals, we’ll be in a far better position than government-mediated program officers to make decisions about how to reduce our use of fossil fuels.

NRDC’s thinking is evolving. But cap-and-invest is still a regressive policy that won’t do much good up-front. And down the line, as the cap tightens and fossil fuel prices soar, it will become wildly unpopular. Stevenson is right to suggest revenue recycling to offset that pain, but why wait? Why not skip “cap-and-invest” and go straight for “tax-and-dividend.” Economists
ranging from Ken Green on the right, Bill Nordhaus in the center and Robert Shapiro on the left are all saying “go for the gold” – a revenue-neutral carbon tax. Keep climbing, NRDC!