Reported for the Carbon Tax Center by James F. Handley.

Citing the effectiveness and simplicity of a carbon tax, New York City Mayor Michael Bloomberg urged Congress to tax fossil fuel producers upstream, and distribute revenue downstream to consumers by reducing payroll taxes. A carbon tax would impose a cost proportional to carbon emissions, but because revenue distribution would not be linked to consumption, the system would “use capitalism” to create broad incentives for energy conservation and alternative energy, Bloomberg said. 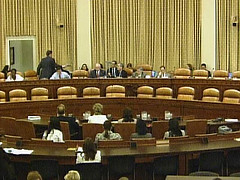 While reiterating that he favors a “straightforward carbon tax,” Bloomberg said carbon cap-and-auction would also work if revenues were distributed downstream, an idea elaborated later by Peter Barnes of Cap and Dividend. Bloomberg urged the U.S. to avoid competing to become the world’s cheapest producer — a strategy that has thrust China into an environmental nightmare and a downward wage spiral. Bloomberg and Dr. Frank Ackerman of the Stockholm Environment Institute and Tufts University cited Germany’s standing as a world leader in manufacturing high-value products despite high wages and energy prices.

Climate policy, said Dr. Peter Orszag of the Congressional Budget Office, poses the thorny problem of imposing short-term costs to achieve long-term benefits. The Lieberman-Warner cap-and-trade bill would have created $100 billion in carbon emission allowances. Orszag stressed that giving away permits to energy producers, as the bill proposed, would enrich fuel producers rather than protect energy consumers. To avert the extreme volatility experienced under EPA’s sulfur dioxide cap and maximize economic efficiency, Orszag urged that a carbon cap be designed flexibly with banking of permits.

Dr. Dallas Burtaw of Resources for the Future agreed with Orszag that giving away permits to energy producers wouldn’t reduce price increases felt by consumers. A tax with a direct dividend would function as a transparent system, Burtaw said, that would signal to the public that we are addressing climate change as a national initiative that is “not engineered to squirrel away special privileges.”

Tim Regan of Corning Incorporated warned the Committee over the competitive disadvantage to energy-intensive industries such as his own under either cap-and-trade or a carbon tax. But Robert Lighthizer, an attorney with Skadden, Arps’ international trade department, assured the panel that the WTO allows the U.S. to impose tariffs equivalent to domestic carbon prices on imported products to put domestic products on a level playing field. Gary Hufbaur of the Peterson Institute cautioned that the WTO has not ruled on these matters but argued that this need not delay U.S. action to create incentives for our trading partners to join in combating global warming.

The Committee questioned panelists extensively. Rep. Paul Ryan (R-WI) cited the conclusion of the February CBO study that a carbon tax would be five times as effective as a simple cap-and-trade system. Several panelists noted that setting tariffs to harmonize the burden on imported goods would be much simpler under a carbon tax because the exact price of carbon would be fixed while under cap-and-trade the price would fluctuate.

After a recess for floor votes, the Committee began its second panel with Frank Ackerman of the Global Development and Environment Institute of Tufts University. “The debate has shifted at last” Dr. Ackerman declared. “Climate science is no longer debatable and now the serious economic discussion is underway.” He insisted that costs of inaction would be staggering — far more severe storm damage, sea-level rise inundating coastal-area homes, farms and businesses, particularly in Florida and the Caribbean, and endemic water shortages. Ackerman testified that the costs of well-designed policies to cut carbon would be small by comparison, probably only 1% of output.

Daniel Abassi of the emissions trading and investment firm MissionPoint Capital called on Congress to price carbon through a cap-and-trade system, with 25% of allowances given to industry and 75% auctioned, with revenue used to reduce distortionary taxes, for tax incentives, efficiency upgrades and low-carbon energy R&D.

The climate crisis is “a major threat to national security,” declared Jerome Ringo of the Apollo Alliance Having just been in Louisiana and Texas, Ringo said average people aren’t talking about the Wall Street meltdown, they’re asking “why they’ve been hit with so many category 5 storms; climate change comes up in almost every conversation.” Ringo called for Congress to push the U.S. to a green jobs economy by funding public transportation and infrastructure. He warned that emissions trading could mean “rich companies get richer” and asked that carbon revenues be dedicated to training and investment in alternative energy.

Peter Barnes urged Congress to put cap-and-trade auction revenue where it will do the most good both politically and economically — into a direct monthly dividend to each U.S. resident along the lines of the Alaska Permanent Fund. A dividend would offset economic effects on consumers and also build the broad political support needed to support climate legislation, Barnes said.

Expanding on the Apollo Alliance’s call for funding public transportation, Bill Millar of the American Public Transportation Association cited DOE studies showing that transport generates a third of U.S. carbon emissions. [Ed. note: autos and light trucks generate 21-22% of U.S. CO2; air travel and freight add another 10%, approximately.] “If a typical two-car, two-adult household chooses to eliminate one car and take public transportation, walk or ride a bicycle for most of its trips, [its] CO2 emissions can be reduced 30% which is more than if that household went without electricity,” Millar testified. Millar said that spending $1 billion on public transportation would create at least 35,000 jobs. He also called transit a direct way to offset the effects of higher fuel prices on consumers.

David Kreutzer of the Heritage Foundation testified that a U.S. policy capping emissions or a carbon tax would do little to reduce global greenhouse emissions and would not be worth the cost. Ackerman strongly disagreed, “If the U.S. leads, the world will follow, but if we don’t, the worst consequences” can be expected.