These are the bottom lines on carbon "revenue treatment," as we read them, of Resources for the Future’s impressive new report, The Incidence of U.S. Climate Policy. Released late last week, the report concludes that distributing carbon permit or tax revenues equally among U.S. residents would be income-progressive, whereas using the revenues to reduce payroll or income taxes would widen the already yawning income gap between rich and poor.

These findings appear just as serious attention is beginning to be paid in carbon-pricing circles to the disposition of the enormous revenues that would be raised under either a hefty carbon tax or a stringent carbon cap-and-trade system. Tomorrow, Sept. 16, the Energy and Environmental Study Institute and Clean Air – Cool Planet are co-hosting a Capitol Hill briefing on Climate Change Legislation and Revenue Recycling, while on Thursday Sept. 18 the House Ways & Means Committee is convening a Hearing on Policy Options to Prevent Climate Change focusing on revenue treatment. 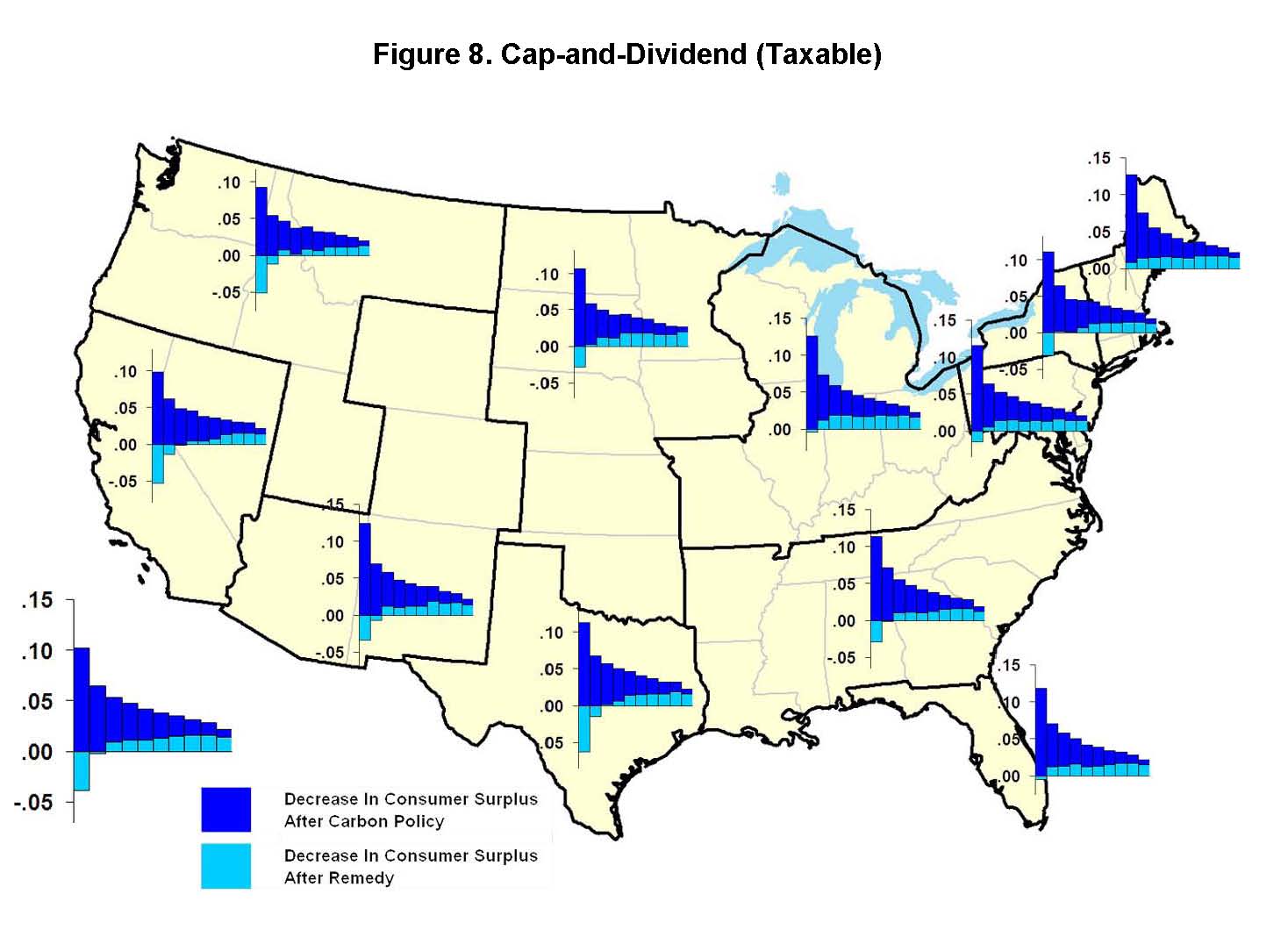 The RFF report evaluated the effects of a CO2 cap-and-trade program on households in each of 11 regions of the country and sorted into annual income deciles, i.e., 10 income-percentage groupings. (The light blue bars in the chart at right denote net costs for each decile from poorest to richest after the revenue-dividend "remedy," with downward-pointing bars indicating net gains; these incidence findings for cap-and-dividend should apply about equally for a carbon tax-and-dividend.) Using the Modified Suits Index, or MSI (a variant of the better-known Gini coefficient for measuring income inequality), the report calculates an MSI of plus 0.15 for the cap-and-dividend approach championed by social entrepreneur Peter Barnes. Since an MSI of zero indicates income-neutrality, while minus one and plus one denote perfect regressivity (all taxes fall on the poorest decile) and progressivity (only the wealthiest are taxed), respectively, the plus 0.15 rating indicates that cap-and-dividend would be moderately progressive. And indeed, the RFF analysis finds that cap-and-dividend would produce a significant gain in "consumer surplus" (overall utility) for households in the lowest income decile, but a loss for most higher-income families.

Conversely, a cap-and-trade with much of the revenue applied to reducing payroll taxes, as long urged by Al Gore, has an expected Modified Suits Index of minus 0.33, indicating considerable income-regressivity. Indeed, that figure is more extreme than the minus 0.18 value estimated for cap-and-trade before considering revenue uses, strongly suggesting that applying carbon revenues to reduce payroll taxes is a non-starter so far as protecting poor families is concerned. Using carbon revenues to increase the Earned Income Tax Credit is progressive, however, with an expected MSI of plus 0.23.

Intriguingly, RFF holds out high hopes for investing carbon revenues in energy-efficiency programs. According to the report, investing in "EE" would yield around the same "progressive" outcome (an MSI of plus 0.16) as cap-and-dividend, but with larger emissions reductions. Though the authors note that "There are important institutional challenges to achieving gains from end-use efficiency investments," they add that "our modeling suggests that if these challenges can be overcome such a policy might have important distributional benefits."

The RFF geographical analysis is also encouraging, generally finding lesser interregional differences than are often supposed — largely because regions with high carbon consumption in one sector, such as driving, tend to have offsetting lower carbon usage in other sectors like home heating.

We encourage visitors to this Web site to comment with their own observations on the RFF report and the issues it addresses.

Image courtesy of Resources for the Future.