Hansen Lays It Out: "Yes, A Carbon Tax."

James Hansen, the NASA climatologist who for two decades has led the worldwide scientific community in sounding the alarm over global warming, yesterday issued a ringing call for a U.S. carbon tax-and-dividend in a speech to Congressional staff in Washington, DC. 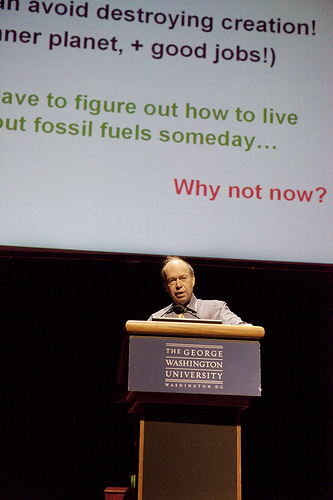 If politicians remain at loggerheads, citizens must lead. We must demand a moratorium on new coal-fired power plants. We must block fossil fuel interests who aim to squeeze every last drop of oil from public lands, off-shore, and wilderness areas. Those last drops are no solution. They yield continued exorbitant profits for a short-sighted self-serving industry, but no alleviation of our addiction or long-term energy source.

Moving from fossil fuels to clean energy is challenging, yet transformative in ways that will be welcomed. Cheap, subsidized fossil fuels engendered bad habits. We import food from halfway around the world, for example, even with healthier products available from nearby fields. Local produce would be competitive if not for fossil fuel subsidies and the fact that climate change damages and costs, due to fossil fuels, are also borne by the public.

A price on emissions that cause harm is essential. Yes, a carbon tax.

Hansen is equally clear about what to do with the carbon tax revenues:

Carbon tax with 100 percent dividend is needed to wean us off fossil fuel addiction. Tax and dividend allows the marketplace, not politicians, to make investment decisions.

Carbon tax on coal, oil and gas is simple, applied at the first point of sale or port of entry. The entire tax must be returned to the public, an equal amount to each adult, a half-share for children. This dividend can be deposited monthly in an individual’s bank account.

As to the impact on struggling families, Hansen recognizes that the carbon dividend stands to benefit the vast majority of the non-rich because they use less energy than the wealthy:

Carbon tax with 100 percent dividend is non-regressive. On the contrary, you can bet that low and middle income people will find ways to limit their carbon tax and come out ahead. Profligate energy users will have to pay for their excesses.

Why not have the government invest carbon tax revenues in promising energy technologies? For one thing:

For his other reason, Hansen, a native Iowan, assumes full-throated populist voice:

Washington likes to spend our tax money line-by-line. Swarms of high-priced lobbyists in alligator shoes help Congress decide where to spend, and in turn the lobbyists’ clients provide “campaign” money.

Ironically, as Hansen was addressing the briefing (organized by Massachusetts Representative Edward Markey), detailed quantitative support for his carbon tax prescription was coming from a well-placed Washington economist. A new report by former U.S. Under Secretary of Commerce for Economic Affairs Robert Shapiro calls for a federal carbon tax starting at $14 per metric ton of CO2 in 2010 and rising steadily to $50 in 2030 (equivalent to $82 with inflation).

Ninety percent of the carbon tax revenues would be recycled via rebates on payroll taxes to employees and employers, or their equivalent in direct payments to households. The remaining 10% would go to energy and climate-related R&D and new technology deployment. Using the U.S. Energy Department’s NEMS consulting model, Shapiro concludes that the nearly revenue-neutral carbon tax would reduce CO2 emissions by 30% below non-taxed levels while shaving only eight-tenths of one percent off future (2030) GDP.

The report, Addressing Climate Change Without Impairing the U.S. Economy: The Economics and Environmental Science of Combining a Carbon-Based Tax and Tax Relief, was published by the U.S. Climate Task Force, a project of Shapiro’s Sonecon economic advisory company.