Condemning carbon trading as “fraught with uncertainties, lack[ing] transparency and creat[ing] large opportunities for emitting facilities to engage in fraud,” a national coalition of environmental justice organizations has called for a federal carbon tax to address “the most critical issue of our time” — the climate crisis. 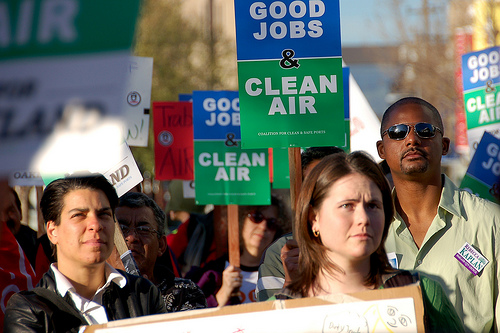 The June 2 statement from the Climate Justice Leadership Forum is the latest sign of mounting disaffection with the top-down push for carbon cap-and-trade. It is particularly significant because the 28 signatory organizations, which span the country from Anchorage to New Orleans and from Oakland to New York City, have been the spearhead of a rising movement by communities of color to crack open the historically affluent and white U.S. environmental lobby, much of which has backed the cap-and-trade approach to pricing carbon emissions.

Moreover, CJLF’s endorsement of “an equitable carbon tax” serves notice that lower-income and “minority” constituencies are concluding that the disproportionate impacts of carbon taxes and other user fees can (and must) be reversed through progressive use of the tax revenues. Indeed, the group’s statement declares that:

An equitable carbon tax must be set high enough to encourage emissions sources to make financial investment in technological controls and energy efficiency, and to begin researching and developing clean, renewable energy options.

A carbon tax cannot remain static and should not merely track inflation but should rise over time so that resource conservation and development of clean renewable energy can continue to be an attractive alternative to fossil fuel use.

Despite agreeing on the desirability of carbon taxes, CJLF and CTC differ on the important question of revenue treatment. The Carbon Tax Center wants 100% of carbon tax revenues to be returned to Americans via either tax-shifting or regular “dividends” to safeguard less affluent families who, on average, consume less energy than the wealthy. In contrast, the Climate Justice Leadership Forum urges:

Program revenue from a carbon tax should be used to fund programs designed to wean the economy off fossil fuel; should provide assistance for vulnerable workers and communities working to transition to the new economy; should include subsidies for energy efficiency that prioritize low- income communities and communities of color, particularly those living in vulnerable areas (coastal zones, floodplains, artics, urban areas).

CTC strongly supports such efforts but wants them funded from general revenues to avoid the horse-trading that could otherwise “raid” the carbon tax revenues and reduce dividends available to families. Still, our tactical difference with CJLF pales beside our shared perspective on the importance of enacting carbon taxes instead of carbon cap-and-trade.

A cap and trade system creates a volatile market that does not create business incentives to invest in new technologies because prices of emissions credits could be less than the price of new technologies. A cap and trade system makes economic planning difficult because the market price, lacking regulation, is not consistent and is difficult for businesses to predict.

A carbon tax carbon reduction system has been found by scientists, economists, policymakers and regulatory analysts to be the most efficient means to reduce carbon emissions.

A carbon tax can insure predictability and create immediate incentives for emitters to invest in new cleaning technology for polluting facilities.

Signatories to the CJLF statement are listed below (as of June 1). As we see it, the coalition’s statement is both a milestone in climate advocacy and an indication that with growing public exposure, support for carbon pricing is slipping away from cap-and-trade and moving toward carbon taxing.