We Explain Gasoline Demand (including why it’s sticky)

Note added April, 2017: A more current and in-depth treatment of the price-elasticity of U.S. gasoline usage may be found in our Sept 2015 blog post, What an Energy-Efficiency Hero Gets Wrong about Carbon Taxes. — editor.

With gas at $3.50 a gallon in April, the U.S. mainstream media is replete with stories of drivers abandoning SUV’s, hopping on mass transit, and otherwise cutting back on gasoline. Yet a year or two ago, when pump prices were approaching and even passing the $3.00 “barrier,” the media mantra was that demand for gasoline was so inelastic that high prices were barely making a dent in usage.

Which story is correct? We lean toward the more “elastic” view, and here we’d like to share some of the data that inform our belief. 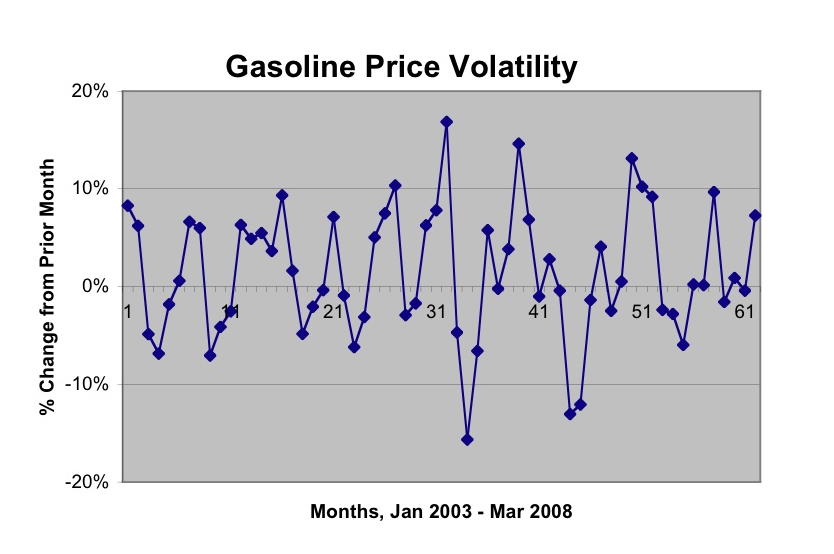 I’ve been tracking official monthly data on U.S. gasoline consumption for the past five years, and compiling the numbers in this spreadsheet. You’ll find that it parses the data in several different ways: year-on-year monthly comparisons (say, March 2008 vs. March 2007); three-month moving averages that smooth out most of the random variations in reporting; and full-year comparisons that allow a bird’s-eye view.

Here’s what we see in the data:

The big takeaway for carbon taxes is that the short-run price-elasticity of gasoline demand is rising (Point #2). (The long-run price-elasticity is probably around minus 0.4, as we discuss here.) While a rising elasticity contradicts the standard economic model in which price-sensitivities don’t change much over time, Point #5 provides a reasonable explanation: gasoline prices (and energy prices in general) had fluctuated so wildly for decades, and a sense of entitlement to cheap gasoline had become so ingrained in American society, that it took a long time for households and businesses to internalize the rise in pump prices — to regard it as real.

Perhaps now, however, a line has been crossed. Maybe the trigger was the price of crude breaching $100 a barrel, or the unspooling credit crisis signaling a fundamental change in the U.S. economy. Or it may simply have been the accumulating weight of price increases noted in Point #6. Whatever the reason(s), Americans seem, finally, to be getting the message that higher gas prices are here to stay.

That’s good news for the climate, national security, and green jobs. But bitter medicine for hard-pressed families as well as business and jobs that aren’t oil-intensive but are being pulled under by gasoline-caused belt-tightening. Imagine if the price rises had been delivered not by a rapacious market but via socially determined ramped-up increases in the gasoline tax (as some commentators have proposed since the 1970s, including, with renewed urgency, after 9/11).

Americans would have had time to adapt, along with real choices such as truly fuel-efficient cars and smaller houses in more-compact developments. And the extra revenues from the higher-priced gasoline would have belonged to all of us rather than just the owners of oil reserves. Those revenues could have been returned to households and businesses via tax-shifts or dividends, and not skimmed off for private enrichment.

The analogy to a revenue-neutral carbon tax couldn’t be more clear.