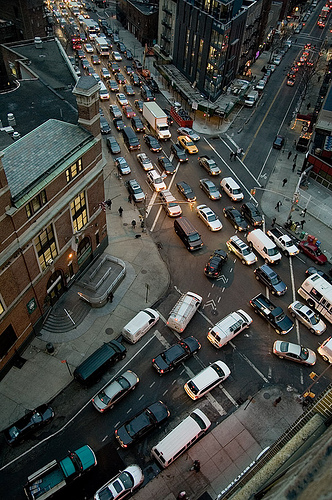 The year-long effort to enact congestion pricing in New York City had a lot going for it:

The demise of the pricing plan — it passed the City Council last week but wasn’t brought up for a vote in the State Legislature yesterday — is prompting much hand-wringing in the City. The New York Times today decried the powerful Speaker of the State Assembly for failing to throw his weight behind the proposal. The blogs, from the estimable Streetsblog ("covering the Livable Streets Movement") to the Times’ dot Earth, are asking what pricing’s defeat says about the fate of other, larger issues, from livable urban streets to the campaign to stop climate change.

There’s soul-searching at the Carbon Tax Center as well. Having argued last year that congestion pricing and carbon taxing were thematically linked — both entail valuing the commons to preserve it; both appear income-regressive but can be made strongly progressive by fairly and effectively allocating the revenues — we’re obliged to ponder what the failure of congestion pricing portends for carbon taxes in America.

We’ve already posted a Top 10 Reasons piece to Grist. It’s a bit on the lite side, but it makes some salient points, such as this:

Misplaced emphasis on climate: Hitching congestion
pricing to climate protection, even in part, was disingenuous. The anticipated traffic reductions would have eliminated no more than 1% of NYC’s CO2. The emphasis should have been on cutting the scourge of traffic, whose theft of time, sanity, and safety from New Yorkers outweighs the climate damage from CBD-bound tailpipes by a couple of orders of magnitude.

(That was reason #10; it would probably rank higher on this blog.)

Our Grist post elicited a number of candid, private replies. Here are three worth pondering (edited, and with the names redacted):

A chemical engineer and policy analyst who worked with congestion pricing theorist and Nobel Laureate Bill Vickrey, honed in on the winners/losers conundrum:

The central problem policy problem, both here and around the world, continues to be that the losers from any policy change know who they are and are always far better organized than are the winners. Indeed, some winners are bamboozled into thinking that they will be losers. Nowhere is this more true than with congestion pricing — invariably this has been opposed by a majority before introduction but is warmly welcomed by a majority afterwards.

This is why political leadership is so important. Such leadership emerges in New York only very rarely if ever and is one of the reasons New York continues to decline relative to other states.  History tells us that this has long been true however; consider how T.R. got on the national ticket with McKinley in 1900.

Appalling though this setback is, I think it has its up-side — Bloomberg
is not really the champion you want for this kind of fundamental
change.  He (your reason #3) never really "got it" in anything other than a
gaudy, intellectualized fashion and, as you say, certainly never put in the work needed to make this
real. The plan was
never properly linked to specific, pre-visualized, and fully explained transit
and other benefits (your reason #2); and for all of Bloomberg’s newly-donned, enviro-conning
green robes he is planning a Manhattan top-heavy with the swaggerers
(your #6 reason). So I think your 10 reasons actually boil down to 1: the
Mayor.

Your article suffers from a logical flaw. It’s fine to point out certain errors that were made. But the important issue, which you don’t address, is whether the congestion pricing plan would have passed even if such mistakes had been avoided. To me, the answer can be summed up in just three words: nein, nyet, no. After all, U.S. politicians have been talking about energy and related issues for more than three decades, and yet not one meaningful action has been taken. So why
would you expect the congestion plan to fare any better? I know I’ve said it before, but the U.S. system is in a state of rigor
mortis.

But a Bronx-born mathematician contributed this upbeat closing:

The amazing thing is that it went as far as it did in terms of being taken seriously — you and your colleagues should congratulate yourselves on that. After all the automobile is the holy icon of U.S. culture and the NY State Legislature has been notorious for being so ineffectual (how long did it take them to bring the divorcelaws into the 20th century?). So you at least had a very respectable showing and can try again.

OK, readers, what do you think about the defeat of congestion pricing in New York and its implications for taxing carbon emissions? Please post.