Is Google Betting on a Carbon Tax?

Google Inc. has a new project, Renewable Energy Cheaper Than Coal. Google is preparing to bet megabucks, mega-engineers and its cutting-edge reputation on its ability to propel solar thermal power, wind turbines and other renewable electricity up the innovation curve and under the cost of coal-fired power, Reuters reported Tuesday.

"Our goal is to produce one gigawatt [1,000 megawatts] of renewable energy capacity that is cheaper than coal. We are optimistic this can be done in years, not decades," said Larry Page, Google’s co-founder and president of products, according to Reuters.

To which we at the Carbon Tax Center say: Good luck, and don’t forget to hire the lobbyists. You’re going to need them to help win a carbon tax, ’cause without the tax, your goal of renewable energy cheaper than coal is likely to remain out of reach.

Don’t look to "market forces" to jack up the cost of coal-fired power. Unlike the 1970s, when the price of coal marched in lockstep with skyrocketing oil, coal prices are stuck in a proverbial peat bog. The national average coal price so far this year, $1.77 per million btu, is barely higher in nominal terms (and 40% less in real terms) than the 1982-1985 plateau of $1.65. The resource is abundant, mining technology is technically mature (if socially and ecologically devastating), and there’s barely a mine workers union to speak of. The power plants themselves are no harder to build, even with SOx and NOx scrubbers, than my kids’ Harry Potter lego’s, they just take a few years longer.

Coal-fired power isn’t about to get much more expensive by itself. Are renewables going to get much cheaper? Arguably not — at least not enough to win Google’s bet. 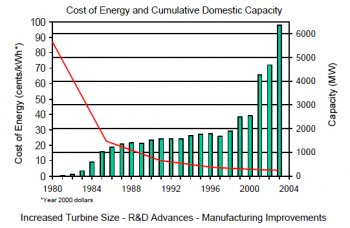 What about electricity from wind, my personal favorite energy-supply source and one for which I’ve done my share of advocacy? Wind power has gotten fabulously cheaper over the past two dozen years, as this DOE cost curve attests. But the rate of decline has slowed. Past advances — taller towers to capture higher wind speeds, larger blades to sweep larger areas, gearing to grab every available erg — appear pretty much tapped out. Further declines in wind costs will be incremental, not quantum. And to compete toe-to-toe with coal as baseload power, wind will need a support system of storage and transmission that will only add to its per-kWh cost.

Photovoltaics have more cost-cutting ahead but are starting from a much higher cost plane. I’m less up to speed on solar-thermal, but I suspect it sits somewhere between wind and PV — cheaper than PV now but with less scope for innovation. The bottom line, then, as I see it, is that coal will continue to undercut renewables in cost for the foreseeable future.

Unless a price is put on coal’s head.

An average kilowatt-hour from a coal-fired power plant sends 2 pounds of CO2 into the atmosphere. A megawatt-hour (1,000 kWh) puts up a ton. Charge $10 a ton of CO2 (or $37 a ton of carbon — precisely what we at the Carbon Tax Center recommend as the yearly increase in a phased-in tax) and you lift the price per coal-fired kilowatt-hour by one cent. If the gap between wind power (sans the federal Production Tax Credit) and coal power is conservatively put at 4 cents/kWh, then $40/ton of CO2 ought to give Google its Holy Grail.

There’s already a couple of carbon tax bills rattling around the House Ways & Means Committee. The Larson bill (that’s John B. Larson of Connecticut, a member of the Democratic leadership) calls for $15/ton of CO2 in starting in 2008, with the level increasing by 10% annually along with an additional inflation-offsetting adjustment. That could bring wind halfway to parity with coal in just a few years.

Hiring genius engineers and pouring Google’s coffers into renewables are terrific moves. But nothing beats getting the prices right. Earth to Google: start pulling for a carbon tax.