China Moving Toward Price on Carbon?

A major new report commissioned by the governments of China and Brazil has called for a carbon tax — or a carbon cap-and-trade system that would also impose a carbon price.

Lighting the Way: Toward a Sustainable Energy Future, authored by leading scientists and
energy experts from 13 countries including Russia, India, Canada,
Kenya, Egypt, Japan, and the U.S., along with Brazil and China, calls for "a wide variety of policy instruments [including] market incentives such as a price or cap on carbon emissions (which can be especially effective in influencing long-term capital investment decisions)." 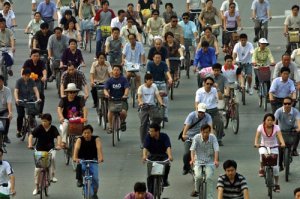 (The quote is from Section 4, The Role of Government and the Contribution of Science and Technology. Our Quote of the Week is drawn from the final "Conclusion" section, Lighting the Way.)

How high a price? Here’s what the report authors, who were assembled by the InterAcademy Council, a group representing the world’s 150 scientific and engineering academies, and were chaired by Nobel Laureate Stephen Chu, Director, Lawrence Berkeley National Laboratory, and José Goldemberg, Professor, University of São Paulo, Brazil, had to say:

Opinions vary as to the level of price signals that are warranted, but many experts believe that a price on the order of US$100–150 per ton of carbon equivalent emissions (in other widely used units, US$27–41 per ton of carbon dioxide equivalent emissions) may be necessary to overcome current cost differentials for many low- and non-carbon technologies and to stimulate the large-scale changes that will be required to eventually stabilize atmospheric concentrations of greenhouse gases.

It is important … to emphasize … that establishing in every market that there eventually will be an emissions price—in the range of US$100–150 per avoided metric ton of carbon equivalent (US$27–41 per ton of carbon dioxide equivalent)—is more important than establishing exactly the number of years in which such a transition will occur. For many countries, pragmatic considerations are likely to argue for a phased and multi-pronged approach, wherein an initial carbon price signal is gradually increased over time and complemented by other policies to address remaining market barriers and accelerate the commercialization of more efficient,
lower-carbon technologies.

(from Section 4.3 The importance of market signals)

Without indicating a preference, the report states clearly that the carbon price must come about from either a carbon tax or a cap-and-trade system, which it compares clearly and fairly here.

In putting its imprimatur on the report, the Chinese government has taken a major step in dismantling what The New York Times earlier this year called "an alliance of denial [in which] China and the United States are using each other’s inaction as an excuse to do nothing" about the global climate crisis.