Dingell Opens the Door … with a Hybrid Carbon Tax

With a mighty creak of long-rusted hinges, a door is finally opening in Washington. The present Congress will apparently be asked to consider a carbon tax.

The measure — actually, a hybrid carbon and petroleum tax — will be introduced by the powerful chairman of the House Committee on Energy and Commerce, Rep. John Dingell (D-Michigan). 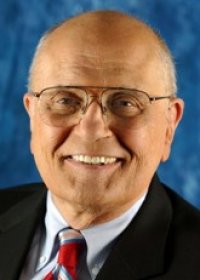 Today Dingell posted on his Web site a summary of the bill, which he began drafting in June. The current version would phase in, each year for five years, a charge of $10 per ton of carbon content of coal, oil and natural gas; plus an additional 10 cents/gallon for gasoline and jet fuel (kerosene). By the end of the five-year period the charges would reach $50/ton of carbon plus 50 cents/gallon of gasoline and jet fuel. These equate to 63 cents a gallon of gas and 90 cents for one hundred kilowatt-hours assuming the nationwide average fuel mix.

Dingell is asking the public for comments. Here’s ours: we think the bill is terrific. In line with what we said when we founded the Carbon Tax Center, and as Dingell himself wrote last month in the Washington Post, "[S]ome form of carbon emissions fee or tax … would be the most effective way to curb carbon emissions and make alternatives economically viable."
Moreover, as we elaborate below, his supplemental tax on gasoline and jet fuel has the look of genius.

How much carbon and petroleum would Dingell’s hybrid carbon tax eliminate? A lot, if you change one key parameter; instead of
halting the tax after year 5, continue ramping it up. If the tax works and the impacts on families and businesses can be offset through tax-shifting and rebates, why stop?

Moreover, these reductions could be supplemented by savings from other targeted policies and programs to reduce use of petroleum, natural gas and coal-fired electricity. (Indeed, a companion section of Dingell’s bill will call for phasing out the federal tax deduction on mortgage interest on very large homes, thus ending a subsidy through which middle and working class families subsidize gargantuan sprawl homes for the wealthy.) No other single policy measure — not broader CAFÉ standards, not a national Renewable Energy Standard, not a massive biofuels push, and certainly not a new generation of subsidized nuclear power plants — can produce nearly the carbon and petroleum savings promised by the Dingell hybrid carbon tax, provided it extends beyond the initial five-year period.

The brilliant touch in the Dingell bill is the supplemental tax on gasoline and aviation fuel. Dingell obviously grasps that a carbon tax alone can’t end America’s dangerous oil dependence. A straight carbon tax falls most heavily on coal, both because coal’s carbon content is so high and because electricity, the form in which coal’s energy is delivered, is more price-elastic than gasoline.

Is the Dingell tax set at the best level? We would like to see it higher — considerably higher. The U.S. economy and America’s millions of vulnerable households could almost certainly handle a steeper ramp-up, provided the tax was made revenue-neutral. The climate crisis demands more than just the provisional $10 rate; CTC has been urging a $37/ton-a-year tax. But getting started at all is a tremendous step, and Dingell’s clear-sightedness and courage, in a Congress little characterized by either, deserve our
admiration.

What should be done with the revenue from the hybrid carbon tax? Needless to say, the quantities are enormous — $180 billion
annually after Dingell’s initial five years, and much more if the ramp-up is extended. While CTC strongly favors the revenue-neutral route, Rep. Dingell has his own ideas for using the revenues — as will just about everyone else.

For now, we urge you to read Dingell’s Web statement and post a comment on his site and at other sites that cover climate, energy, oil, national security, and politics. Having a legislator of Dingell’s stature even float a carbon-tax trial balloon is a very important and positive development — possibly a breakthrough. There’s a lot riding on it. Be heard.

Sept. 27 addendum: Two carbon-tax bills have already been submitted to the House Ways & Means Committee in 2007: the Stark-McDermott Save Our Climate Act
and the Larson American Energy Security Trust Fund Act. The Dingell proposal is certain to give these bills some of the prominence they deserve.