A momentous debate is under way in New York City over the prospect of bringing "congestion pricing" — a concept proven in London, Stockholm and Singapore — to America’s largest and most gridlocked burg. The issue has great resonance for carbon taxing, as I argue in this piece, a slightly different version of which appeared in Gristmill in July. — C.K.

Every so often there arises an environmental controversy that tests the capacity of Americans to face reality. One such case is the Cape Wind dispute, in which well-connected Cape Codders are battling to keep a large array of non-polluting windmills out of Nantucket Sound. Another is emerging in New York City, where Mayor Michael R. Bloomberg has proposed a “congestion fee” on cars and trucks driving into Manhattan.

Backers from the mayor on down tout the fee as a cure-all: it will unsnarl traffic, relieve pollution and create a revenue stream to upgrade subways and buses, while also cutting global warming emissions. 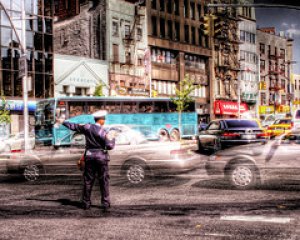 These claims are a bit overstated. More probably there will be a single-digit increase in traffic speeds, a one percent drop in emissions citywide, and perhaps a $400 million revenue infusion for a transportation system whose annual costs top $30 billion.

But even though the immediate benefits of the congestion charge are relatively modest, the act of imposing such a charge is transformative in itself.

The real significance of the congestion charge is this: it establishes the principle that safeguarding “the commons” — our air, water and public space — requires that we exact from ourselves a commensurate price for uses that damage or deplete it.

The congestion charge puts our money where our mouth is.

Although it has mostly gone unstated, the congestion charge rests on ironclad economic logic: street space, being both coveted and finite, has a value; hence, our failure to charge a price for its use in effect substitutes rationing by waiting, for rationing by pricing — which is why New York, Los Angeles, and every city in between have traffic jams.

Accordingly, a congestion charge that confronts those of us who would drive with the cost of traffic delays we impose on each other isn’t just one means of reducing congestion — it’s the only way to do so.

Mayor Bloomberg could place traffic cops at every intersection, airlift every double-parked car and truck, and make the subways free — and gridlock would reappear within a week, as the improvement in traffic flow attracted drivers now deterred by the too-crowded roads.

The only way to permanently open up road space is to impose some form of road valuation, and Mayor Bloomberg’s pricing plan, while blunt and imperfect, is a very good start. Most important of all, though, it establishes the principle.

What’s missing — crucially, fatally missing — is a valuation of the atmosphere’s limited capacity to absorb carbon emissions without damaging the climate.

This isn’t to say that tech fixes don’t have their place. They will be needed to help get off carbon, just as car and truck alternatives such as expanded subway service, exclusive bus and bicycle lanes, and, in New York, a cross-harbor rail freight tunnel, must supplement the congestion fee.

But without congestion charges and revenue-neutral carbon taxes that in effect reward every traffic-busting or carbon-reducing choice, the fixes and alternatives will be systematically underused.

The obvious, first-order, unmediated choices that will reduce congestion and carbon are things that no one can make money from — things like fewer and shorter trips, smaller homes, turning stuff off.

Congestion charges and a carbon tax will cause people to make these choices, and that is the only way killer traffic and killer climate change will be brought under control. It won’t happen just by subsidizing technological fixes whose investors have the advantage of an effective lobby.

What, then, is standing in the way of congestion fees and a national carbon tax? The power of an entrenched minority, for one thing. In New York City, fewer than one in 20 working residents drives toll-free into the intended congestion charging zone, but they know who they are and are not shy about protecting their self-awarded entitlement to a toll-free commute.

Conversely, the benefits of congestion pricing will be broadly distributed but not life-changing. Indeed, judging from polls, many New Yorkers don’t even realize they are potential beneficiaries.

“Losers cry louder than winners sing,” said University of Michigan professor Joel Slemrod in explaining the near-impossibility of overhauling the U.S. tax code, and the same holds true for the congestion fee and the carbon tax.

What is more, the benefits from road fees or carbon taxes aren’t just diffuse; because they lie in the future they are by necessity uncertain.

That is why enacting the Bloomberg congestion plan is so hard, and so necessary. America’s civic polity is stuck in traffic, so to speak. Getting it moving again will require us to imagine something other than permanent stalemate and act upon that vision.