Carbon Tax, not “Peak Oil,” Can Save Climate

"It’s the fifth time to my count that we’ve gone through a period when it seemed the end of oil was near and people were talking about the exhaustion of resources," said Daniel Yergin, author of a Pulitzer Prize- winning history of oil, who cited similar concerns in the 1880s, after both world wars and in the 1970s. "Back then we
were going to fly off the oil mountain. Instead we had a boom and oil went to $10 instead of $100."

That’s from a front-page article, Oil Innovations Pump New Life Into Old Wells, in today’s New York Times. The article uses Chevron’s Kern River oil field near Bakersfield, CA, whose life has been extended by injections of high-pressured steam, as a template for how advancing technology and profit opportunities from today’s higher oil prices are combining to increase recovery rates at oil fields around the world. 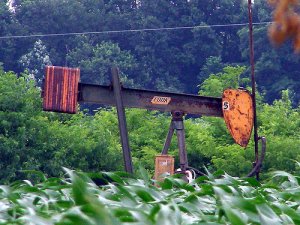 The bottom line: peak oil will come some day, but not soon enough to avert climate catastrophe. I’ve long maintained that "peak oil" wouldn’t be a climate lifesaver. In my first talk centered on carbon taxing, at the "Philly Beyond Oil" meeting in 2005, I noted that $70 crude would "stimulate conservation, extraction and substitution," and that only the first of this trio (conservation) would be a climate-helper. Quoting the trenchant economics writer Doug Henwood, I cautioned that there’s "no shortcut around political
agitation," which is why Dan Rosenblum and I founded the Carbon Tax Center earlier this year.

At present, the fuel prices that determine the demand side of the equation include nothing for the climate damage resulting from
burning those fuels, resulting in vast overuse. Moreover, those feedback mechanisms I mentioned in my 2005 talk invariably overshoot the mark, resulting in the kind of wild price swings that Yergin described. These fluctuations drown out underlying movements toward higher prices, frustrating investment in low-carbon alternatives on both the demand and supply sides.

What to do? A tax on carbon fuels will internalize the costs of carbon damage and make manifest today the long-term trajectory of rising carbon-fuel prices. No other policy option — not cap-and-trade, not fuel efficiency standards, not subsidies for renewables — can do that.