Some members of Congress have voiced concern that measures to impose a price on carbon emissions will disproportionately burden energy users in their district or state. “We’re looking for some type of regional equity in whatever they propose,” said Rep. Marcy Kaptur (D-OH) during Energy and Commerce Committee deliberations over the Waxman-Markey climate bill, as reported in  the New York Times on May 8, 2009. At a Senate Finance Committee hearing on proposed cap-and-trade legislation, Senator Orrin Hatch (R-UT) complained that a $50/ton CO2 price would increase electric rates by 70% in his state, which relies heavily on coal for electricity. 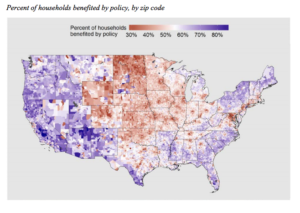 The root of the issue is variations in regional fuel mix, compounded in some instances by variations in levels of energy use. Electricity rates in the Pacific Northwest, which is generously endowed with hydro-electric power, should scarcely be affected by carbon emissions pricing  through either a tax or cap-and-trade system. In contrast, the Plains states, which primarily employ coal for electricity generation, and the Northeastern states, which rely heavily on fuel oil for heating, could face disproportionate impacts. In addition, people in rural areas tend to drive longer distances than city-dwellers, so their transportation costs would be expected to rise more.

Are these regional differences significant? What if any steps should be taken to address them in designing a carbon tax and the accompanying revenue-recycling measures?

A thorough analysis of these questions is “The Incidence of a U.S. Carbon Tax: A Lifetime and Regional Analysis” (January  2008). In this AEI working paper, economists Kevin A. Hassett, Aparna Mathur and Gilbert E. Metcalf estimated the incidence of a carbon tax of $15 per metric ton of CO2 imposed “upstream” on fuel producers and importers. They defined the direct component as the increased cost of gasoline, home heating and electricity. The indirect component is the increased cost of other goods, ranging from air travel to food purchases, resulting from the higher cost of fuel used in their provision. The two components are of similar magnitude, but the indirect component doesn’t vary much across the U.S., reflecting our national market for consumer products.

Hassett et al. chose the household as the unit of consumption and considered the lifetime incidence of the tax. Taking both direct and indirect impacts into account, Hassett et al. calculated that in 2003 the largest variation between regions was less than 0.37% of household income. (This was less than the maximum regional differences in the two other years chosen for the analysis — 0.42% in 1987, and 0.89% in 1997.) They concluded:

Carbon taxes are… thought to have uneven regional effects. We … find that the regional variation is at best modest. By 2003 variation across regions is sufficiently small that one could argue that a carbon tax is distributionally neutral across regions.

The U.S. Census Bureau reports that the median U.S. household income in 2006 was $48,201. Thus, the 0.37% difference represents a difference of just $178 per year between typical households in the most affected and the least affected regions. The average interregional difference is much less.

Nevertheless, aggregated over millions of households this difference could be significant, especially if, as we and some others urge, a carbon tax (or cap-and-trade system) quickly attains and surpasses the relatively modest carbon emissions price level assumed in the Hassett analysis.

More recently, in “The Incidence of U.S. Climate Policy: Alternative Uses of Revenues from a Cap-and-Trade Auction” (Resources for the Future, April 2009), Dallas Burtraw, Richard Sweeney, and Margaret Walls examined income and distributional effects (across eleven regions) of an emissions cap with auctioned permits that resulted in a price of $20/ton CO2. (The regional incidence of a carbon tax would mirror that created by pricing carbon emissions using a cap.) They considered distributional effects on an annual basis which tends to magnify disparate impacts between income groups (and may also magnify regional differences) in contrast to Hassett et al.’s lifetime incidence analysis which tends to minimize them.

Burtraw et al. found that “putting a price on CO2 emissions can distribute costs unevenly across income groups and regions, and that revenue allocation decisions can either temper or exacerbate these distributional effects.” They found that, compared to revenue recycling via reduced payroll tax rates, a direct “dividend” approach would result in slightly larger net regional differences, especially in the lowest income groups. Yet even those differences would amount to no more than 2% of total annual income, assuming the $20/ton CO2 price.

Disparate impacts on households across regions can be compounded by regional differences in impacts on energy-intensive industries and their workers. For example, while energy consumers in coal-mining states might be affected only slightly more than those in other states, workers who mine, process or transport coal would face far larger impacts as a carbon tax (or cap) shifted employment and investment from coal to low-carbon alternatives. The flip side, of course, is that the same carbon tax or cap would benefit workers in areas with abundant renewable resources. A state like Montana, with both coal and wind resources, might be a net employment gainer under a carbon tax as construction and operation of wind generation facilities increased; but its coal workers would still need transition assistance.

Prof. Metcalf suggests a way to mitigate distributional disparities: adjust the amounts of revenue recycled according to the average regional carbon tax burden. For instance, if households in the Pacific Northwest would indeed pay less in carbon taxes than the national average, individuals or households in that region would receive proportionately lesser payroll tax reductions or direct distributions of revenue. Households in the Plains states might receive a correspondingly greater share of the recycled revenue. In this way, a revenue-neutral carbon tax could be regional-neutral as well.

To address disparate impacts on energy-intensive industries, Congressman Larson’s proposal designates 1/12 total of initial carbon tax revenues to assist affected workers and industries. (This “transition assistance” would be phased out over a decade.) A different approach in cap-and-trade legislation introduced by Reps. Inslee and Doyle — granting free allowances to “energy-intensive, trade-exposed” industries — would appear to mute the very price signal that such industries require to reduce emissions.

Other regional and affected-industry adjustments — hopefully temporary — could be made under either a carbon tax or cap-and-trade. We believe that under an explicit carbon tax they would be far simpler, more transparent and less likely to undermine carbon reduction incentives.

In May 2009, economists Michael Cragg (UCLA) and Matthew E. Kahn (The Brattle Group) published a fascinating analysis correlating county-level CO2 emissions with the political beliefs and climate-policy voting records of Members of Congresss. Their paper, Carbon Geography: The Political Economy of Congressional Support for Legislation Intended to Mitigate Greenhouse Gas Production, finds that:

[C]conservative, poor areas have higher per-capita carbon emissions than liberal, richer areas. Representatives from such areas are shown to have much lower probabilities of voting in favor of anti-carbon legislation. In the 111th Congress, the Energy and Commerce Committee consists of members who represent high carbon districts. These geographical facts suggest that the Obama Administration and the [Energy & Commerce] Committee will face distributional challenges in building a majority voting coalition in favor of internalizing the carbon externality. 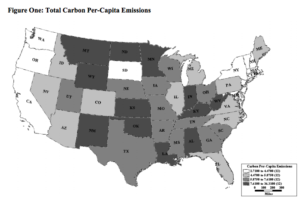 The Cragg-Kahn analysis appears to have been prescient, with the Waxman-Markey bill laden with free allowances, “clean coal” RD&D funds, and other emoluments that won just enough support from Democrats representing high-carbon districts to win the bill’s passage in June 2009. However, unlike the AIF and RFF papers discussed above, the Cragg-Kahn paper is not an “incidence” analysis. This is because its unit of analysis (statistically, the “dependent variable”) was carbon emissions rather than carbon consumption.

Thus, the analysis assigned 100% of carbon emissions from power plants to the counties and districts where the plants are located, rather than allocating them to end-use customers — the households, offices and facilities that purchase the electricity and will pay the carbon tax or emission permit fees as they are passed through the supply chain. It therefore could not depict precisely how carbon emissions pricing will add differently to expenditures in one county or state versus another. Nevertheless, we commend the Cragg-Kahn paper as a provocative piece of political economy, along with John Kemp’s Reuters column, Carbon Geography of the United States, that brought the paper to our attention.

A Nov. 3, 2009 post on The New Republic’s Vine blog, Cap and Trade Costs: Place Matters, featured a map that grouped U.S. metropolitan areas into quintiles according to the per-household cost impact of proposed cap-and-trade bills. The authors noted:

The household costs of cap-and-trade compliance … depend quite a bit on what metro you live in. Ranging above and below the average $160 cost to a household nationally in 2020, the average metro figures range from a high of $277 per household in Lexington, KY to a low of just $96 in Los Angeles. Low costs are registered all across the West’s metros and in Northeastern metros like New York, Boston, and Rochester. Much higher costs will be borne by households in metros all across the upper South and Ohio Valley—places like Cincinnati, and Indianapolis, and Nashville. So once again, as we keep saying: Place matters.

The map, credited to the Brookings Institution, is worth studying. Also worth pondering is the authors’ conclusion:

[R]egions that want to do well for their citizens might want to manage growth a little better, provide transportation options, and think about cleaning up their energy sourcing.

Last, a report published by Resources for the Future in October 2013, by Daniel F. Morris and Clayton Munnings, Designing a Fair Carbon Tax, argues that regional disparities in the incidence of a federal carbon tax may be less than commonly thought.