In 2016 the Citizens’ Climate Lobby commissioned a paper analyzing the effects on households of a $15/ton carbon “fee and dividend” plan in which the impacts of higher fossil fuel prices are at least somewhat offset by monthly “dividend” distributions. While the paper’s main thrust was the different impacts on rich, middle-class and poor households (summarized here), it also examined the financial effect by age group. 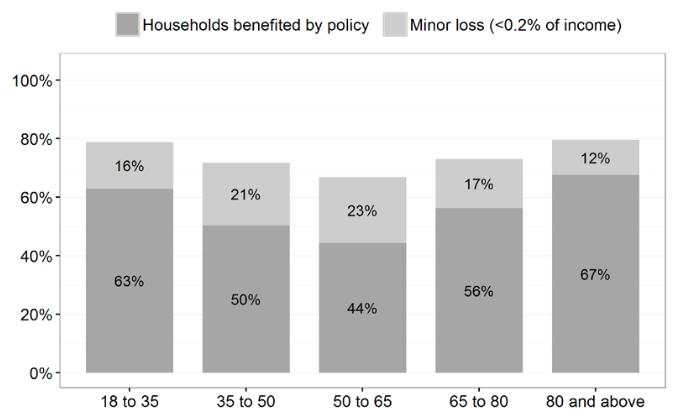 The CCL paper found that around 2/3 of very young and very old households – ages 18-35 and 80 and above – would experience a net benefit after the monthly dividend payments, compared to 44% of households aged 50-65. These findings reflect the fact that younger and elder households typically have smaller carbon footprints through lower levels of consumption, relative to households in the middle-age groups. Moreover, younger households tend to be relatively larger and thus would receive larger dividends, under the CCL plan.

In a similar vein, economists at the Washington, DC think-tank Resources for the Future considered the generational impacts of a $30/ton carbon tax in a 2013 paper, “Deficit Reduction and Carbon Taxes: Budgetary, Economic, and Distributional Impacts.” Writing at a time when so-called “deficit hawks” still held some sway in public discourse, they concluded that dedicating the carbon tax revenues to deficit reduction would offer particular benefits to the young by reducing tax burdens that might otherwise carry into the distant future.

On the other hand, asking today’s middle-aged and elder Americans to allow carbon tax revenues to be used to shrink the national debt risks compounding the difficulty of passing a carbon tax whose benefits already accrue largely to future generations. If the objective is to assemble a political majority that can pass a robust carbon tax, it may be best to leave deficit reduction off the table in favor of either tax-shifting or revenue return a la fee-and-dividend.