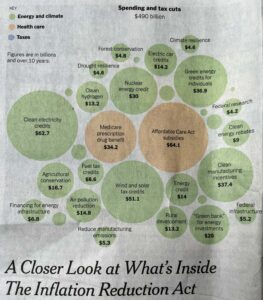 NY Times graphic depicts the spending pots over the next ten years.

The Inflation Reduction Act of 2022, unveiled in late July by Senate Majority Leader Chuck Schumer and West Virginia Senator Joe Manchin, and passed by Congress (with zero Republican votes) and signed by President Biden in early August, is in some ways the antithesis of carbon pricing. Rather than making dirty (fossil) energy costlier in the marketplace, it seeks to make clean energy cheaper by subsidizing low- or zero-carbon power sources. It also aims to leverage low-carbon electricity by paying vehicle and building owners to switch to electric power from combustion fuels that can’t themselves be decarbonized.

Despite the lack of a carbon price, the IRA stands as a landmark legislative achievement — the most ambitious and costliest federal initiative to reduce greenhouse gas emissions. Moreover, the affirmative nature of the legislation — “upending the debilitating narratives of U.S. climate helplessness and Biden-Democratic Party haplessness,” as we wrote in early August in a post in The Nation — could eventually open the door to federal legislation pricing carbon emissions. Indeed, the bill’s climate provisions almost certainly helped Democrats hold the line in the November 2022 midterms by allowing them to run on an actual climate achievement rather than just on talk, as Inside Climate News reported two days after the election.

The Inflation Reduction Act does include a fee on “excess” methane emissions from oil and gas extraction and processing. The fee could be impactful not only on future methane emissions but as a potential stepping stone to possible carbon emission fees.

Our new, permanent IRA 2022 page has the full scoop on the Inflation Reduction Act, with these sections: