From 2000 to 2020, China increased its electricity generation from coal nearly five-fold, while the U.S. cut the size of its coal-fired power sector by 60 percent. That’s a 12-fold switch in relative position. China now combusts slightly more than half of all coal burned worldwide, and its coal sector alone emits more carbon dioxide than all coal, oil and gas burned in the United States.

Signals from China during 2014-2105  — the years of the U.S.-China bilateral climate agreement and the Paris Climate Accord — that it might seek to cap its coal-fired power sector, have proven illusory. Rapid ramp-up in China’s wind and solar power is thus far only modestly attenuating the growth in generation of electricity from coal. 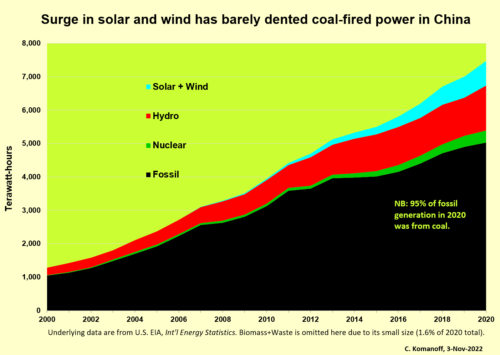 A rapidly rising China carbon tax would go a long way toward cutting coal-burning for electricity. State-run industries would be incentivized to install solar arrays for peak periods, power usage would become more efficient, and national expansion of wind and solar generation would pencil out better. Air pollution that annually costs the populace millions of lost life-years would be reduced as well. Nevertheless, no robust, transparent carbon price, whether economy-wide or for the power sector alone, is on the horizon in China.