No such thing as Green Bitcoin

Call me a neigh-sayer, but the pretty horses decorating yesterday’s NY Times story about Argo Blockchain, Inc.’s “Green Bitcoin” venture can’t hide the oxymoron that lies beneath: no matter how many wind turbines and solar panels Bitcoin miners build or buy to run their ravenous processors, crypto is fundamentally filthy. 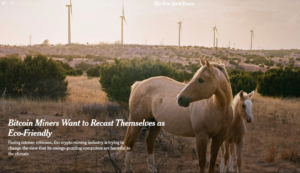 The reason is straightforward: all the new green energy we can capture from the air and the sun needs to serve a higher purpose: replacing fossil fuels. Wind farms and photovoltaic arrays stop the combustion that’s causing climate change only when they take the place of coal- and gas-fired power plants. If they’re hooked up to Bitcoin computers, they can’t substitute for anything. The net gain for climate is zero.

To be sure, it’s better to run Bitcoin machines with renewables than with fossil fuels. But even 100%-renewable Bitcoin isn’t climate-positive, since the land supporting the new green stuff powering the Bitcoin mining is perforce unavailable to aid the climate. At some point — a year from now, five years on, ten — some other entrepreneur, one focused on renewables rather than crypto-currency, could have built the same arrays and dedicated their output to the grid. That would actually push out fossil fuel generation and achieve the carbon cuts the climate needs.

If it helps, think of the difference between the engineer’s perspective and the climate economist’s. The engineer counts X many kilowatt-hours of wind and solar feeding Bitcoin computers that draw the same X kWh’s and calls it a wash: “carbon-neutral.” The climate economist sees those figures but also debits the Bitcoin operation for the opportunity cost of its computer banks whose voracity renders the green kWh’s unable to take the place of fossil-fuel kWh’s. The “wash” that the engineer touts is actually the persistence of coal- and gas-fired electricity generation that will keep spewing carbon.

What I call the climate economist’s perspective is something I’ve cultivated lately, since I started rethinking the climate consequences of the closure of the Indian Point nuclear power plant, in New York City’s far-north suburbs. In 2020, in a post I called Drones With Hacksaws, I equated shutting a large source of essentially carbon-free electricity such as Indian Point to unleashing a swarm of hacksaw-wielding drones to lay waste to a hypothetical giant offshore wind farm by lopping off its thousand or more turbine blades. The climate consequences of the two acts were, I argued, identical, since both involved doing away with steadily-functioning zero-carbon power sources whose operation obviated the need to run carbon-fuel-burning power plants. 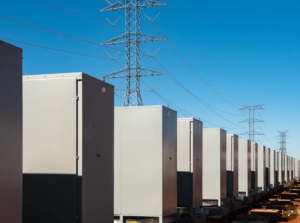 This photo of the Argo Blockchain electrical distribution panels ran below the horses picture in the NYT story. Powering them takes lots of juice.

Applying this perspective to Argo Blockchain helps us see that from a climate perspective, its wind turbines (and promised solar arrays) add up to nada. The potential climate good from the company’s green power sources is squandered in powering an artificial and unnecessary service. From a climate standpoint, Argo’s wind and solar arrays at best break even, rather than provide a net benefit.

The Times story missed a lot of details: how much electricity Argo Blockchain’s Bitcoin mining facility outside Lubbock, in northwest Texas, will consume; how much of it will come from the row of wind turbines visible in the distance; how much of world Bitcoin “demand” the facility will satisfy. But it did include these helpful pointers:

Crypto mining does not involve any picks or shovels. Instead, the term refers to a verification and currency creation process that is essential to the Bitcoin ecosystem. Powerful computers race one another to process transactions, solving complex mathematical problems that require quintillions of numerical guesses a second. As a reward for this authentication service, miners receive new coins, providing a financial incentive to keep the computers running.

In Bitcoin’s early years, a crypto enthusiast could mine coins by running software on a laptop. But as digital assets have become more popular, the amount of power necessary to generate Bitcoin has soared. A single Bitcoin transaction now requires more than 2,000 kilowatt-hours of electricity, or enough energy to power the average American household for 73 days, researchers estimate.

Earlier this year, the New Yorker magazine writer David Owen used crypto mining as an object example in his Jan. 15 article, How The Refrigerator Became an Agent of Climate Catastrophe. After citing a 2011 U.S. Energy Department (D.O.E.) study touting massive carbon reductions from federal regulations upgrading refrigeration efficiency, Owen trenchantly pointed out that “In 2011, the D.O.E.’s forecasters presumably didn’t anticipate that improvements in energy efficiency would make it increasingly economical to power and cool the server farms that mine and manage cryptocurrencies.” 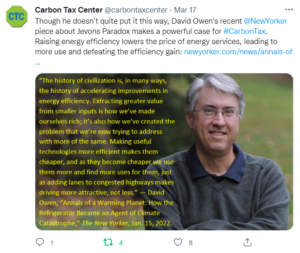 Owen’s article, which is well worth reading for its narrative power and climate relevance as well as its iconoclasm, was his latest exposition of Jevon’s Paradox, the phenomenon by which increases in energy efficiency lower the price of “energy services” and thus lead to more use, undercutting the efficiency gain. The antidote, of course, is to ensure the energy services — cooling, travel, lighting, and so forth — don’t plunge in price by raising the price of energy provision, as I pointed out a decade ago in a post in Grist, If efficiency hasn’t cut energy use, then what?

We could do that, of course, with a carbon tax.

When it comes specifically to blunting Bitcoin and other cryptocurrencies, there are three broad ways that carbon taxing could help.

Carbon taxing can at least nudge greenward the mix of power sources used by Bitcoin miners: less coal or gas firing, more wind and solar. That won’t make Bitcoin green, but it will lessen its climate-destructiveness.

Last, carbon taxing could conceivably strengthen social-shaming of Bitcoin entrepreneurs and users by reframing crypto as a refuge for losers.

This notion, though admittedly speculative, would be the most enduring. There’s a range of consuming activities that need to be deemed off-limits on account of their unsustainability, destructiveness and uselessness: helicopter flights, driving giant SUV’s, monster-size homes. Crypto belongs on that list.