Can You Live Large AND Green?

The War on Cars, a prophetic podcast “about the hundred years’ war between The Car and The City,” has built a loyal audience for its pithy explorations of U.S. car culture. Episode 51, Getting the Car Out of Carbon Emissions, which aired last November, caught the attention of Thomas Matte, MD, MPH, a New York City-based environmental health consultant and researcher whose work explores the interface between the urban physical environment and public health. Tom recently sent a letter to the podcast’s hosts. I’ve edited it for length and clarity. — C.K.

Happy 2021.  As one of my own New Year’s resolutions, I am belatedly reaching out to thank you for a great episode, Getting the Car Out of Carbon Emissions.

I’m a boomer-aged “car guy in recovery.” As an environmental health researcher and consultant, I’ve devoted a good deal of work to studying the effect of climate and air pollution on health in New York City. I appreciated your soliciting the perspective of another boomer and an unreformed car lover trying to be green (Motel 6 pitchman Tom Bodett) as well as a transportation thought leader (Andrew Salzberg) who understands the limits of private electric vehicles for decarbonizing transportation.

I’d like to share some suggestions for themes you could explore in future episodes, possibly circling back to Mr. Bodett and Bill McKibben, another rural Vermonter you recently interviewed.

From listening to Mr. Bodett, one might think his Tesla, solar panels, electric heat pump and grid connections all grow on trees. In fact, the embedded carbon emissions from manufacturing EVs are a substantial share of life cycle emissions and exceed the embedded emissions for conventional vehicles, mostly on account of the batteries. Similarly, the plastics and metals used in solar and wind generating equipment and electricity-powered heating, cooling and other appliances are currently manufactured with considerable (and difficult-to-decarbonize) energy inputs.

Many components are manufactured in China, where industry is more carbon-intensive than in the U.S. Inputs of water, land and other finite resources as well as impacts of recycling or disposing of batteries and other components at scale also need to be considered.

This doesn’t obviate the benefits of EVs and renewable energy. Nevertheless, as Mr. Salzberg points out, the more energy and resources are devoted to privately owned EVs — especially oversized ones built for speeding and off-road use — the harder it is to decarbonize the economy.

2. Private-vehicle-enabled country living is resource-intensive and rife with environmental externalities.

The low population density of Mr. Bodett’s southern Vermont home “town” of Dummerston means that land – a finite resource – is used very inefficiently there.  While I am sure things look green and natural when he looks out the window, the yards, homes, septic systems, wells, pools, roads and other infrastructure and their maintenance intrude and impact on the forest, fields and habitats that would otherwise have developed there when farming declined and migrated from New England. The result is less truly natural land for ecosystem services and less unspoiled forest for threatened species and hikers to enjoy.

If, for example, Dummerston had developed with the more compact urban form of nearby Brattleboro, the same population could live on much less land, leaving around 16,000 acres undeveloped, by my estimate. Or consider this thought experiment: what would happen if the population of Inwood in northern Manhattan, where I live, packed up, moved, purchased and developed land in rural areas at the density of Dummerston? More than 600,000 rural acres would be impacted. So, by living in urban Inwood, rather than fleeing to “greener” country living, Inwood residents are conserving more than all of the land purchased at considerable cost and protected to date by the Vermont Land Trust.

Low-density development isn’t just more carbon intensive on a per capita basis, as demonstrated in this seminal 2006 analysis published by the American Society of Civil Engineers. It also makes it harder to decarbonize the energy supply by scattering people across the land. As a result, more people live in the sight lines of potential wind energy projects, worsening the political environment for wind energy. Spreading development into the wilderness-urban interface also amplifies climate-driven risks to life and limb from vector-borne illness and wildfires, as we have seen recently across the American West.

Dummerston is less demographically diverse than even nearby Brattleboro and of course much less diverse than many larger towns and urban settlements. Like many rural Vermont communities, it is too sparsely populated to support even limited bus transit. Compared to more-densely developed communities, Dummerston offers fewer opportunities  for living, working, accessing services and upward economic mobility for socioeconomically disadvantaged groups, especially if they cannot afford private motor vehicles. 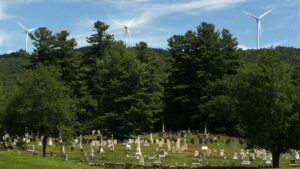 Rural areas are too often renewable-energy graveyards, as this scene along New Hampshire Rt 10 suggests.

Vermont’s characteristic rural, low-density development also limits the potential for the healthiest way of reducing transportation greenhouse gas emissions: investments in public transit and active-mobility (walking and biking) infrastructure. Vermont’s car-dependent commuting mode split has barely budged in decades, with around 75 percent of trips in single-occupant vehicles (driving alone) and less than 2 percent via transit or cycling. Admittedly, for those who can afford the resources and leisure, some of the sedentary time behind the wheel might be partially offset by physical activity from hikes, chopping wood for heat, or, in Tom Bodett’s case, laps in the in-ground pool.

Is affluent and green Vermont an oxymoron?

This isn’t to say that no one should live in rural areas or that everyone should move to a city.  But too often, natural backdrops create an illusion of living in harmony with nature. Electric vehicles and rooftop or backyard solar panels have their place, of course, but Mr. Bodett’s extravagant lifestyle cannot be scaled up in a green or sustainable way.

To be sure, Tom need not move to Manhattan to live more sustainably. He could decamp to a smaller lot in a walkable location in Brattleboro. The walkscore.com site shows several, and more may be in store; Vermont’s Department of Housing and Community Development last summer posted a detailed guide for zoning reform to expand housing and create opportunities to live in compact, walkable neighborhoods like those found in some of the State’s historic villages and downtowns. Mr. Bodett could move to town, trade in his Tesla for a Nissan Leaf and an e-bike, and could close up his Dummerston estate — filling in the pool and letting the forest reclaim all but the solar array and the road needed to service it.

By doing this, Tom would allow more of his renewable solar energy production to help decarbonize the grid for his Vermont neighbors. Of course, Mr. Bodett is wealthy enough to live anywhere he chooses, but that doesn’t mean his well-intentioned but faux green lifestyle should be promoted or subsidized — especially as we learn more about the social and environmental costs to obtain the resources that green technologies require.

Sure, Tom, go ahead and “leave the light on” for us. Just not so many.