Blame the NIMBYs *And* Exxon

(A slightly shorter version of this post first appeared in Streetsblog NYC on Oct. 28.)

My neighborhood NIMBY’s (Not In My Back Yard-ers) are at it again, this time slapping down a bid by the Tribeca Whole Foods to install a cargo bike loading dock in front of their Tribeca store in lower Manhattan. 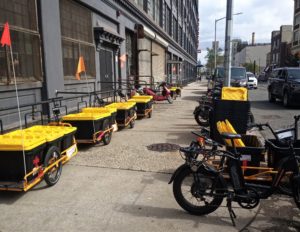 Delivery bicycles with trailers outside a Whole Foods in Brooklyn, NY. Manhattan stores need loading space in the street to avoid foot traffic and narrow sidewalks.

As Streetsblog reported last week, the executive committee of Manhattan Community Board 1 voted 6-4 to shelve the plan. So it’s back to the drawing board, meaning, at best, needless delay of a rare Mayor de Blasio-approved initiative to unclog our streets and reduce truck emissions by using human-powered delivery bikes, some with electric assist, for urban “last-mile” delivery. (For those of you possibly seduced into imagining Bill de Blasio is a climate mayor, think again.)

One board member said that giving up five free-parking spaces to accommodate the loading area would be “a travesty.” The vote, and the contentious and largely uninformed discussion preceding it, showed the folly of allowing unelected community boards veto power on innovations that could help move people and goods safely and sustainably. It also laid bare the hollowness of the “just blame Exxon” narrative that has taken hold of the climate movement.

Listen to the committee meeting and three objections emerge:

“Twenty-four hours a day,” one exec-committee member hyperbolically reminded the Zoom gathering, prior to casting his No vote, “Fresh Direct has a series of trucks parking [in Tribeca and] spewing diesel emissions… We’re doing the same thing now with Whole Foods.”

You read that right: in the mind of this self-proclaimed automobile and motorcycle aficionado, idling Fresh Direct trucks elsewhere in Tribeca are a reason to deep-six a competitor’s scheme to swap out polluting trucks with zero-emission cargo bicycles. (That logic brings to mind that old New York Times story about a proposed wind farm near Cooperstown in which some rando whined that seeing giant windmills near his house “would be like driving through oil derricks to get to your front door,” a story I mentioned in my long-form article on wind power back in 2006.)

From the same committee member: “The streets have gotten more dangerous because they have not been widened… There are so many uses that [NYC] DOT is trying to provide for: commercial, vehicular, buses, bike lanes, new pedestrian areas — they’re painted in such a way it looks like someone on psilocybin did the layout. It’s so confusing and dangerous with the various modalities interacting with each other and [cargo biking] is just one more… To me this whole concept is objectionable and it’s not because I necessarily drive more than anyone else, it’s just enough … enough input on our streets!” (It starts at 29:20.)

There it is: The streets are dangerous because government, seeking to advance traffic safety and efficiency, has made it trickier for me to wield my dangerous vehicle. And now you’re doing it again. Take your government hands off my government-subsidized driving and free parking!

The episode lays bare some discomfiting truths. For one, America’s extreme economic inequality not only gives plutocrats like Whole Foods and Amazon owner Jeff Bezos immense reach into our lives, it also provides a pretext to oppose any positive steps rich people might take, under the guise of progressivism. For another, placard abuse — illegal appropriation of curb space by police and other public employees’ private cars, a practice that is rampant in New York City, especially lower Manhattan — serves as a convenient cause to reject any measure to reconfigure curb space; so long as cops and other apparatchiks get free parking, “the community” deserves no less.

But here’s another disconcerting truth: we can’t simply deem Exxon and its fellow fossils solely responsible for the climate crisis if unelected NIMBY’s are able to delay, water down or block seemingly every path to actually cut carbon emissions.

Last week, in addition to the no vote at Manhattan Community Board 1, there was the district manager of Queens CB1 demanding that some Citi Bike docks in Astoria be relocated from the roadbed to the sidewalk, a change that cycling advocates rightly fear would impede traffic calming in the area. On this “livable-news,” urbanite site (Streetsblog), probably a tenth of all posts since its founding in 2006 have concerned pushback by NIMBY’s on Brooklyn’s Prospect Park West (bike lane), Manhattan’s 14th Street (bus lane) and other thoroughfares throughout the five boroughs that has forced “livable-streets” advocates to wage protracted battles for bike lanes, bus lanes and a citywide array of life-saving speed cameras. More broadly, scarcely a day goes by that somewhere in the 50 states, a carbon-busting wind farm, solar array, infill housing or transit project is turned aside or left off the drawing board altogether on account of obstruction from deep-pocketed, aggrieved Not-In-My-Back-Yard types. 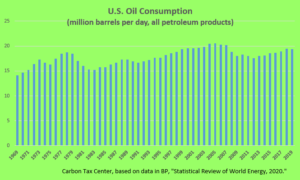 Yes, Exxon’s political muscle and support of denialist think tanks have for decades helped enforce pro-carbon stasis. Ditto, the Koch Brothers’ “dark money,” as copiously documented by diligent reporters like Jane Mayer and Christopher Leonard. But the oil and gas industry only retains its power because demand for its products persists.

After Joe Biden pledged during the second and final presidential debate to “transition away from the oil industry,” Politico’s Tim Alberta tweeted (and MSNBC’s Chris Hayes retweeted) that “we’ve been transitioning from oil for 50 years.” Dream on. Until the pandemic, U.S. vehicle-miles traveled stayed high, SUV’s and pickups kept ballooning, and air travel grew steadily — trends reflected in the chart above.

Stopping NIMBY’s from holding up low-carbon alternatives isn’t the whole struggle, but it’s a big part. I’m told that a reconfigured cargo-bike resolution could come before Manhattan CB1 as early as next Thursday, Nov. 5. Unless I’m in the streets demonstrating for election integrity, I plan to attend.