We’re grateful to Gavin Grindon, a lecturer in art history at the University of Sussex, U.K., for his trenchant analysis last week of Big Oil’s longtime strategic sponsorships of museums and other prestigious cultural media in Britain and the United States. 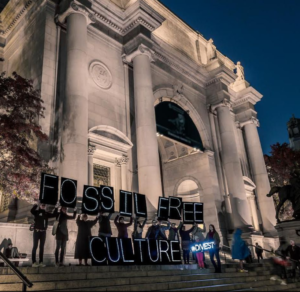 In a Memorial Day New York Times op-ed, This Exhibition Was Brought to You by Guns and Big Oil, Grindon made clear that “For big oil, big pharmaceutical companies and the arms industry, sponsorship of the arts is not charity; it is a strategic expenditure.”

“To conduct their business,” he explained, “companies must build a web of influence and operation through many of the institutions that are often clustered in cities, through which they become enmeshed in our lives. London, for example, is one of the main financial centers for the oil industry. Oil companies must extract from the city a combination of services, so that elsewhere they may continue to extract, refine, transport and sell oil.”

Grindon described how this “extraction of services” works:

This is a matter not only of buying financial services from private companies, but of creating legal, political and technological leverage; facilitating clearance from regulators; gaining support from government departments or legal permission for new projects. Cultural institutions are a key part of this infrastructure into which businesses must insinuate themselves to establish an air of social legitimacy and acceptability for practices that might otherwise risk coming into question. (emphasis added)

In Britain, Grindon noted, corporate cultural insinuation typically takes the form of branded museum sponsorships which “offer businesses the attention of influential audiences, access to senior government figures at special events and the opportunity to securely intertwine themselves with ideas of national history and culture.” Whereas in the United States, cultural insinuation is more commonly conducted “through a system of boards that reward individuals who make charitable donations to the museum with the culturally influential position of trustee.”

You can’t ask for a more richly embroidered depiction of how oil and other companies “cynically use art to build webs of influence and become further enmeshed in our lives,” as the subhead of Grindon’s op-ed put it. Yet the question remains: Just how much do these webs of influence actually keep modern industrial societies locked into oil and the other fossil fuels? And the corollary: How effective, really, is deligitimizing Big Carbon — kicking fossil fuel executives off museum boards, university boards, other corporate boards, etc., “shaming” them, for short — in resetting governmental policies that enforce carbon “lock-in” against energy efficiency, renewable energy and other carbon alternatives?

Someday, social science may have the answers. For now, we’re skeptical, Grindon’s evocative essay notwithstanding. 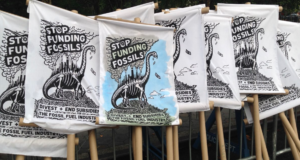 For one thing, Big Oil is already deeply enmeshed in our lives. Every trip in a petrol-fueled car, every delivery to our doorstep from a van or truck, every airplane journey manifests and reinforces our complicity with oil. The “shame” of causing climate change isn’t limited to the fossil fuel companies, notwithstanding headline-garnering reports proclaiming that “Just 100 companies are responsible for 71 percent of global [carbon] emissions.”

Assume, moreover, that the boards of the Guggenheim, the Met, the Moma, the Whitney and the New Museum, to name five museums targeted by “protests over their links to issues like the oil and arms trade, gentrification and colonialism,” according to Grindon, were 100 percent free of fossil fuel executives. How exactly would that slow the rate of carbon emissions today, next month, a decade or now?

Yes, the legal, political and technological leverage that helps clear the paths to new oil fields and new markets, along with the regulatory clearance, governmental support and permissions, and other realms that Grindon lacked space to mention such as university R&D — would all become incrementally harder to obtain and hence more expensive to acquire. That in turn could make petroleum fuels somewhat more expensive to produce, thus hiking their prices and reducing demand. But in our estimation, these slightly higher hurdles wouldn’t materially change the infrastructural inertia and broad acquiescence that keep oil and coal and gas firmly in the saddle.

Sure, we’re all for ostracizing fossil fuel executives and others who lobby elected officials, strong-arm regulators, intimidate landowners and in some cases instigate lethal violence against protectors of nature, all to extract more petrol whose combustion products add to climate wreckage. But at what point, if ever, does this ostracism penetrate to Joe Sixpack in the showroom choosing between the F-150 that delivers 22 miles to the gallon and the F-350 that gets just 15? Or to the councilmember of a transit-rich city or suburb being pressured by NIMBY’s to reject upzoning and thus force local schoolteachers and sanitation workers to move to the auto-dependent exurban fringe? Or her counterpart in rural America or England who next week must cast the deciding vote on a wind or solar farm whose production would help phase out the gas-fired power plant three townships over?

We’ll say it again. In our view, the level of carbon emissions today and in the future is determined far more by structures of settlement, commerce and identity than by the decisions of a few hundred oil executive and business tycoons — whom we regard in any event as largely interchangeable, so long as demand renders their functions essential and profitable. And those structures, while seemingly unshakable, can be weakened and brought down with the help of carbon taxes.

Breaking Big Carbon requires huge mobilization along interconnected fronts of political action, public investment, culture change and carbon taxing. Exposing and stopping the oil industry’s cynical use of people’s longing for artistic experience is good work, and we support those doing it. But it’s not a substitute for the hard slog of politics, investment and carbon pricing. Let’s keep on with them.