“Carbon taxes levied on the supply of fossil fuels in proportion to their carbon content are the most powerful and efficient . . . of the various mitigation strategies to reduce fossil fuel CO2 emissions,” says the report, “because they allow firms and households to find the lowest-cost ways of reducing energy use and shifting toward cleaner alternatives.” 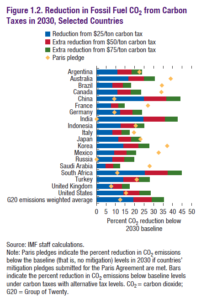 Nothing new there. What’s noteworthy in the report released today by IMF are three things:

First, the report quantifies emission reductions for three different levels of carbon taxes: $25/ton, $50/ton and $75/ton. The results, shown at left, reveal both carbon taxing’s power and its limits. The projected reductions from the $75/ton tax are substantial, surpassing 40 percent of emissions for the world’s #1 and #3 current emitters, China and India. Yet those reductions are vis-a-vis 2030 emissions, not current levels. Moreover, they fall far short of the needed contractions for meeting the nominal IPCC target of limiting warming to 1.5 degrees Centigrade, as the graph below demonstrates.

Second, the report eschews the disastrous conflation of the principal carbon externalities (climate damage and air pollution) as subsidies — a misguided framing that marred the otherwise exemplary (and pro-carbon tax) 2014 IMF report, Getting Energy Prices Right. That language furthered the false narrative that governments need not tax fossil fuels to slash CO2, since they would only need to zero out their fossil fuel subsidies; in fact, the “subsidies” were largely the failure to tax in the first place.

Last, and perhaps most intriguing, the report takes the bold step — bold for an establishment icon like IMF — of casting France’s Gilets Jaunes (yellow vest) movement not as know-nothings protesting a piddling rise in the price of diesel, but as a rising up against the privilege to pollute enjoyed by the rich:

In France, the rapid ramping up of a similar [to Sweden’s] carbon tax was suspended in 2018 at $50 a ton, following public backlash against the perceived unfairness of the tax, which was introduced at the same time as broader tax reductions seen as benefiting the wealthy. (IMF at pp 13-14) 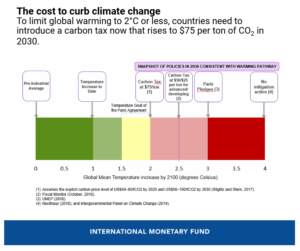 IMF label is a misnomer. Carbon taxes aren’t a cost since each dollar of tax creates a dollar of revenue that society can use to mitigate higher fuel costs, reduce other taxes or invest productively.

It’s good to see IMF address the political dimensions of energy pricing. Better still that this bulwark of global capitalism is warming to the view of journalist Christopher Ketcham, who embedded with the yellow vesters during their Paris protests last winter and discovered that they are intent on toppling both wealth and carbon. (Ketcham’s revealing portrait of the protest movement, What the Gilets Jaunes Really Want, appears in the August issue of Harper’s.)

The Washington Post’s Chris Mooney scooped the IMF report earlier today with a solid story, The world needs a massive carbon tax in just 10 years to limit climate change, IMF says. While a $75/ton charge by 2030 can’t quite qualify as a massive carbon tax level, such a levy applied to the entire world would indeed have massive scope and impact.

Not for the first time, the Fund has invested its expertise and prestige in prodding governments across the globe to move quickly and decisively toward taxing carbon emissions. It’s time for the rest of us to join the push.