On Monday, The Nation magazine posted “Congestion Pricing Is New York’s Green New Deal,” a piece I co-authored with fellow transit advocate Jeff Blum, casting congestion pricing in New York City as an initial foray of the Green New Deal. Following is the text of the piece, with an addendum instructing Carbon Tax Center subscribers and allies what they can do between now and March 31 — congestion pricing’s legislative deadline — to push the proposal across the finish line in Albany. — C.K.

While the Green New Deal basks in the national spotlight, a different but parallel policy idea is advancing in New York. That is Gov. Andrew M. Cuomo’s plan for congestion pricing, which will charge motorists to drive in the most car-jammed (and transit-rich) part of the city, Manhattan south of 60th Street.

At first glance the two appear more opposite than related. The Green New Deal is national, congestion pricing is New York-specific. One is expansive, a solar and wind energy-based revitalization of our society and economy. The other seems punitive, making drivers pay for what is now free. 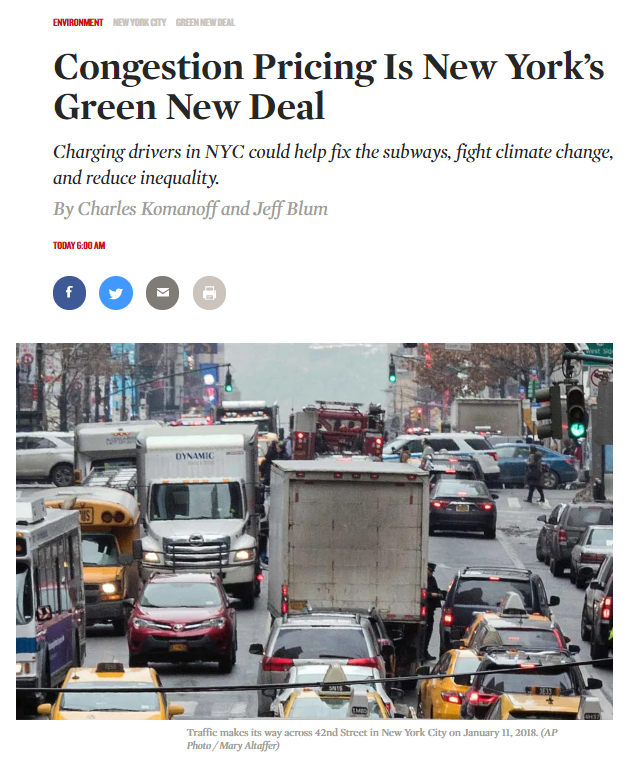 As posted in The Nation. See link at top of this post.

But we believe the two have a great deal in common, both practically and philosophically. Moreover, congestion pricing faces a March 31 legislative deadline to allow initial appropriations for the tolling apparatus to be included in the New York State budget due on that date.

And so we invite Green New Deal adherents — from Massachusetts Sen. Ed Markey and New York Congresswoman Alexandria Ocasio-Cortez to the legions of determined climate justice activists who have put the Green New Deal on the political map — to make congestion pricing in New York a stepping stone to the national fight.

To begin, any program to save the climate depends on having cities thrive. Urban residents use only a fraction as much fossil fuels as suburbanites or rural dwellers, not because they are virtuous but because cities, due to their compactness, are inherently lower-carbon. City residents drive less not just because they can take transit but because destinations are close by. Density also dictates that homes and offices use less power and heat. For cities to thrive and grow, automobile traffic must be tamed and restrained, which congestion pricing does with marvelous efficiency.

Congestion pricing shares DNA with the New Deal through emphasis on public investment. Federal spending in the 1930s strung electric wire and conserved the soil, and federally driven investment going forward can decarbonize our economy. In the same way, the congestion toll revenues in New York can pay to modernize the city’s buses and subways — as happened after London adopted congestion pricing in 2003. Thanks to massive transit investment and reappropriation of street space there, nearly 25% more people now enter the center of London daily, mostly on trains, buses and bikes, while car travel speeds have remained stable.

There’s more. Congestion pricing rests upon the Rooseveltian idea to care for the commons — rivers and forests and farmland. Streets and transit are cities’ commons, which America has allowed cars to plunder for a century.

After years of temporizing, transit advocates in New York have finally resolved that the antidote to broken subways and too many automobiles must include charging vehicles to drive in city centers. Both major transit coalitions, the more business-oriented Fix Our Transit and Fix the Subways, led by the impressive grassroots organizing group Riders Alliance, have put congestion pricing at the top of their political agendas. Before long, we predict, Green New Deal supporters will similarly acknowledge that fully unleashing green energy requires a robust carbon tax, not just as a source of funds but to re-set societal defaults, to re-orient incentives and to unlock innovation.

The Markey–Ocasio-Cortez Green New Deal resolution is adamant about labor rights and economic justice. So too is the movement for congestion pricing. New York City’s most venerable anti-poverty advocate, the Community Service Society, examined congestion pricing and found that for each low-wage New Yorker who regularly drives into Manhattan, nearly 40 will benefit from better trains and buses paid for with the congestion-toll revenues. In the same vein, the right-of-center Manhattan Institute concluded last year that extending New York’s decade-long jobs boom depends on massive and effective investment in mass transit to allow immigrant and other workers to access jobs. 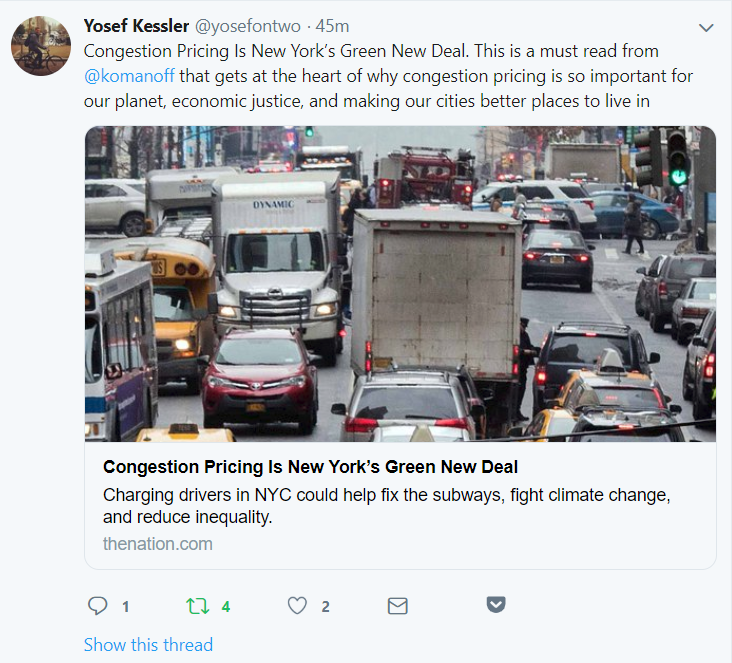 The iconic New York progressive centrist Daniel Patrick Moynihan understood this thirty years ago. As a powerful Senate Committee chairman, he found a way to use a portion of federal gas taxes to decouple urban mobility from automobiles, spurring a rise in transit and bicycling and making cities cleaner and more dynamic.

There is this difference, however. Unlike the Green New Deal, which is open-sourced by design, congestion pricing for New York is being finalized by the state’s governor, who seems intent on keeping the toll levels and other key plan details under wraps till the last minute.

Attempts to toll the entrances to Manhattan’s central core have come up short so many times that any leader worth his Machiavelli might rightly presume that iron-fisted control is the only way to get it done. But that approach is out of step with both the current political era and the enormous momentum to pass congestion pricing in the state budget this month and finally cure the dysfunction of the city’s streets and subways that daily afflicts millions.

A fifth of the way into our new century, awareness is spreading of the folly of giving away for free a finite resource, whether it’s the atmosphere’s capacity to remain temperate or Broadway’s five travel lanes through Times Square.

A Green New Deal, like its illustrious antecedent, can start in New York. Today, congestion pricing can revitalize and unsnarl New York’s subways and streets. Tomorrow, a nationwide mobilization can turn our carbon economy green.

Komanoff, an energy and transportation economist, was “re-founder” of the bicycle advocacy group Transportation Alternatives. Blum was founding executive director of USAction and leader of multiple state and national pro-transit campaigns.

Whether you live in NY State or somewhere else, please visit the Fix The Subway campaign to find out how you can donate time, money or both to pass congestion pricing for New York City now. Or, text DELAY to 52886. Remember, the vote for the budget bill that will include initial allocations for congestion pricing is expected between Friday March 29 and Sunday March 31. Thank you.