From Thomas Piketty: A Project to Save Europe . . . and the Climate

The following statement was published today in The Guardian under the headline, Our Manifesto to Save Europe from Itself, under the signature of Thomas Piketty, the French economist who rose to global renown with the 2013 publication of his scholarly work, Capital in the Twenty-First Century.

The statement, co-signed by over one hundred European economists, outlines a plan to revitalize the European Union with with a “new, sovereign European assembly capable of producing a set of fundamental public goods and services in the framework of a lasting and solidarity-based economy,” paid for by a suite of “four major [new] European taxes” including a carbon tax set at a minimum of 30 euros per metric ton (equivalent to around $31 per U.S. short ton).

While the proposal presumably was provoked by the ongoing “Gilets Jaunes” protests rocking France, its ambitions are far greater than simply responding to the current unrest. We are of course encouraged that the proposed program includes a carbon tax.

We are grateful to the editors of The Guardian for publishing the manifesto in full. The original version on The Guardian’s site includes a complete list of signatories. We have changed European syntax in some places to American style and have bolded passages deserving emphasis.

Since the election of anti-European governments across the EU, and with Brexit looming, it is no longer possible to continue as before. We cannot simply wait for the next departures, or further dismantling without making fundamental changes to present-day Europe.

Our continent is caught between political movements whose program is confined to hunting down foreigners and refugees, on one hand, and on the other those who claim to be European but in reality continue to consider that hardcore liberalism and the spread of competition are enough to define a political project. They don’t recognize that this lack of social ambition is what leads to feelings of abandonment. 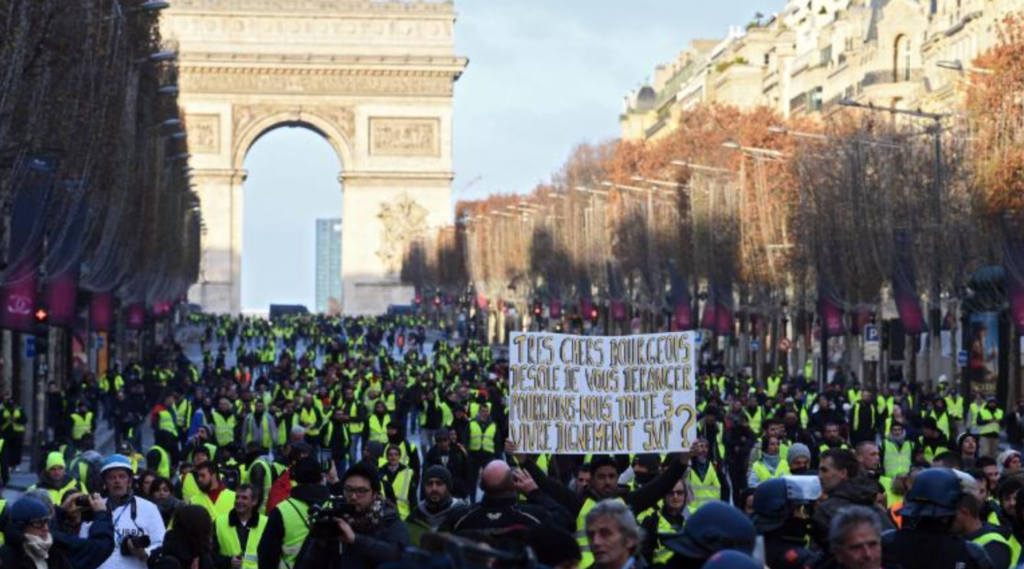 There are some movements attempting to end this fatal dialogue and address the structural problems that have arisen after a decade of economic crisis. There is no lack of these specifically European-critical situations: structural under-investment in the public sector, particularly in training and research, a rise in social inequality, acceleration of global warming and a crisis in the reception of migrants and refugees. But these movements often have difficulty in formulating a coherent alternative project, and in describing precisely how they would like to organize the Europe of the future.

This is why we, European citizens from different backgrounds and countries, are today launching this appeal for the in-depth transformation of the European institutions and policies.

Our manifesto contains concrete proposals, in particular a project for a democratization treaty and a budget project – and we have made it all publicly available. Our ideas may not be perfect, but they do have the merit of existing. The public can access them and improve them.

They are based on a simple conviction: Europe must build a new model to ensure the fair and lasting social development of its citizens. The only way to persuade them is to abandon vague and theoretical promises.

If Europe wants to restore solidarity with its citizens it can only do so by providing concrete evidence that it is capable of establishing cooperation and by making those who have gained from globalization contribute to the financing of public-sector good. That will mean making large firms contribute more than small and medium businesses, and the richest taxpayers paying more than poorer taxpayers. This is not the case today.

Our proposals are based on the creation of a budget for democratization that would be debated and voted on by a new, sovereign European assembly. This will at last enable Europe to equip itself with a public institution capable of dealing with crises in Europe immediately and of producing a set of fundamental public goods and services in the framework of a lasting and solidarity-based economy. The promise made at the treaty of Rome of “harmonization of living and working conditions” will finally become meaningful.

This budget, if the European assembly so desires, will be financed by four major European taxes, the tangible markers of this European solidarity. These will apply to the profits of major firms, the top incomes (over €200,000 a year), the highest wealth owners (over €1m ) and carbon emissions (with a minimum price of €30 a tonne).

If it is fixed at 4% of GDP, as we propose, this budget could finance research, training and the European universities, an ambitious investment program to transform our model of economic growth, the financing of the reception and integration of migrants, and the support of those involved in carrying out this transformation. It could also give some budgetary leeway to member states to reduce the regressive taxation that weighs on salaries or consumption.

The issue here is not one of creating a transfer of payments across Europe – taking money from the “virtuous” countries to give it to those that are less so. The project limits the gap between expenditure deducted and income paid by a country to a threshold of 0.1% of its GDP – this could only be increased should there be consensus to do so.

This threshold can be raised in case there is a consensus to do so, but the issue is primarily of reducing the inequality within countries, not between them, and of investing in the future of all Europeans. But those calculations would exclude spending that benefits all countries equally, such as action on climate change. Because it will finance European public goods benefiting all countries, the budget for democratization will de facto also foster convergence between countries.

Because we must act quickly but we must also get Europe out of the present technocratic impasse, we propose the creation of a European assembly. This will enable these new European taxes to be debated and voted as also the budget for democratization. This European assembly can be created without changing existing European treaties. 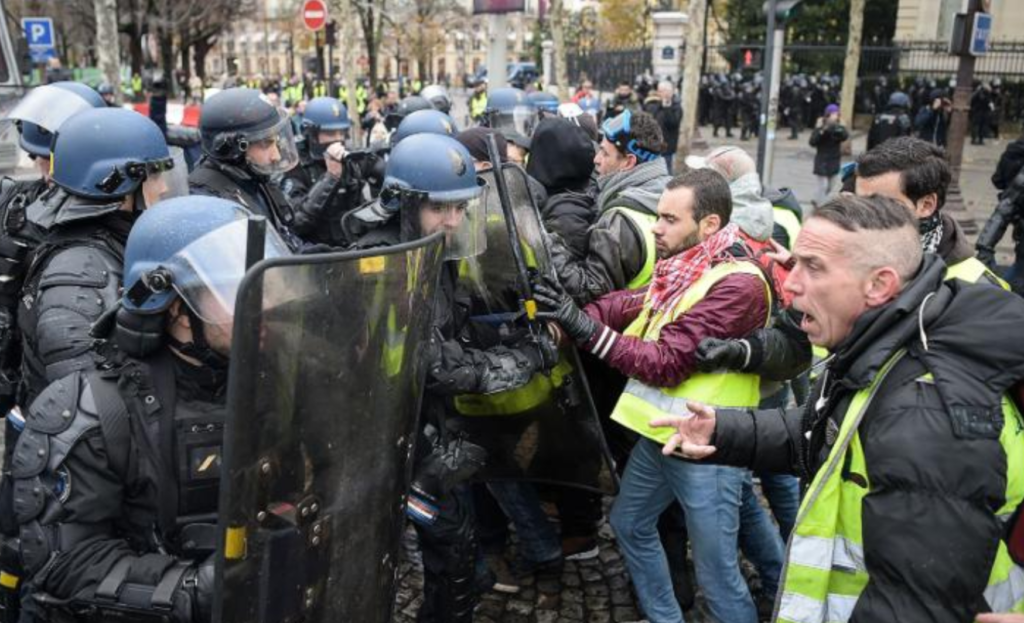 “The protests have morphed into a wider demonstration against Emmanuel Macron’s government,” says CNN. The proposal by Piketty and fellow signatories seeks to build a “solidarity-based economy.”

The assembly would, of course, have to communicate with the present decision-making institutions (in particular the Eurogroup in which the ministers for finance in the eurozone meet informally every month). But, in cases of disagreement, the assembly would have the final word. If not, its capacity to be a locus for a new transnational political space where parties, social movements and NGOs would finally be able to express themselves would be compromised.

Equally its actual effectiveness, since the issue is one of finally extricating Europe from the eternal inertia of intergovernmental negotiations, would be at stake. We should bear in mind that the rule of fiscal unanimity in force in the European Union has for years blocked the adoption of any European tax and sustains the eternal evasion into fiscal dumping by the rich and most mobile, a practice which continues to this day despite all the speeches. This will go on if other decision-making rules are not set up.

This choice merits further discussion. In particular, our project could also function with a lower proportion of national parliamentarians (for instance, 50%). But in our opinion an excessive reduction of this proportion might detract from the legitimacy of the European assembly in involving all European citizens in the direction of a new social and fiscal pact, and conflicts of democratic legitimacy between national and European elections could rapidly undermine the project.

Thus national elections will de facto be transformed into European elections. National elected members will no longer be able to simply shift responsibility on to Brussels and will have no other option than to explain to voters the projects and budgets they intend to defend in the European assembly. By bringing together the national and European parliamentarians in one single assembly, habits of co-governance will be created which at the moment only exist between heads of state and ministers of finance.

We now have to act quickly. While it would be preferable for all EU countries to join the project without delay – especially the four largest countries in the eurozone (which represent more than 70% of the GNP and population) – it is designed so that it can be adopted and implemented by any set of countries that wish to do so. It enables those who wish to make immediate progress by adopting this project to do so right now.

We must all assume our responsibilities to participate in a detailed and constructive discussion on the future of Europe, lest our continent is left to sink further into damaging division.

Thomas Piketty is professor of economics at the Paris School of Economics.