Think global, act local. I had that seventies slogan in mind last Sunday morning, at home in lower Manhattan. The pro-immigration rally in Battery Park was a few hours away, the sun was shining, and I walked around the corner to meet up with Erik Torkells, editor of the neighborhood blog, Tribeca Citizen.

Erik had a bag-snagger — a telescoping grappling hook for pulling plastic bags off tree limbs. Like many New Yorkers, he can’t abide the bags and other gossamer debris stuck, like tumors, to our half-a-million street trees. The contraption cost 400 bucks, and when he drew it from its canvas bag I could see why: it had four extenders, a fancy clamp or two, and a fearsome business-end worthy of a stevedore.

Bag snagging, I quickly learned, is serious business. Time-consuming, too. Over the next hour-and-a-half, and even with a big assist from my pal Rachel, who was passing by and gamely joined our little crew, Erik and I could only untangle a few dozen derelict bags from as many trees. And sad to say, we snapped a few spindly tree limbs in the process. (After we posted this, Erik put up a detailed account, Adventures in Bag Snagging; it’s obsessively terrific.) 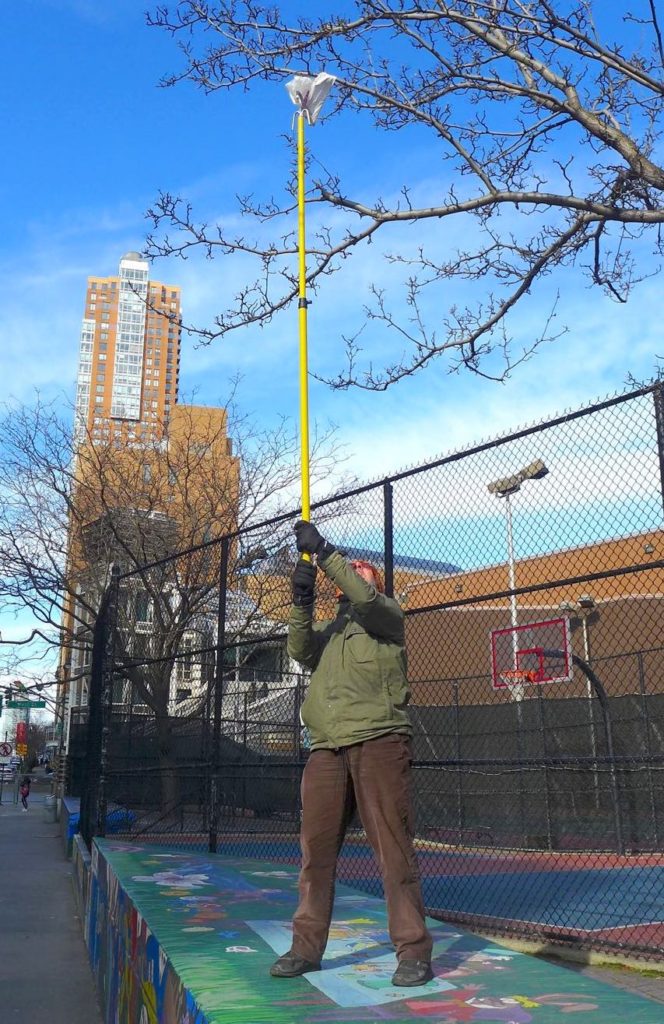 If only there were a way to keep the bags out of the trees in the first place!

There is, of course, and that’s the main reason I went bag-snagging on Sunday, and why I’ve posted this piece as a Carbon Tax Center blog.

Beginning in February, a NYC local law enacted last spring — Local Law 63 of 2016 — will attach a nickel fee to carryout bags dispensed at supermarkets, grocery and convenience stores, and pharmacies. Shoppers who bring their own bags with them are of course exempt from the charge. Similar fees in dozens of U.S. cities, including San Jose, CA and Washington, DC, have curbed distribution of store bags by over two-thirds, reducing bag litter in gutters, streams and, yes, trees, and saving municipalities millions in trash collection and disposal.

Here in New York, however, implementation of the law was suspended to allow time for, er, more arguing. And now a last-ditch effort to pre-empt the law threatens to undo it before it can get started.

The connection to carbon taxing isn’t so much the petroleum waste from single-use bags, as the principle of charging a fee to encourage efficiency and conservation. To opponents, the fee smacks of punishment. To supporters, it’s a simple prod to finally do what our counterparts in Europe have been doing without grumbling for a century: keep a string or cloth bag with you to stick the groceries in.

In a way, the bag fee fight is the carbon tax struggle stripped to its essence: both policies internalize some of the cost of the harm in its price to incentivize less use. If anything, the bag fee is even more of a no-brainer. There’s no demonstrable burden on the poor. (The NYC law exempts food-stamp users.) There are no shut coal-mines to fret over, no analog to the low-wage worker forced to drive hours each day between two jobs. “You say you use twenty bags a week? Fine, bring your own!” 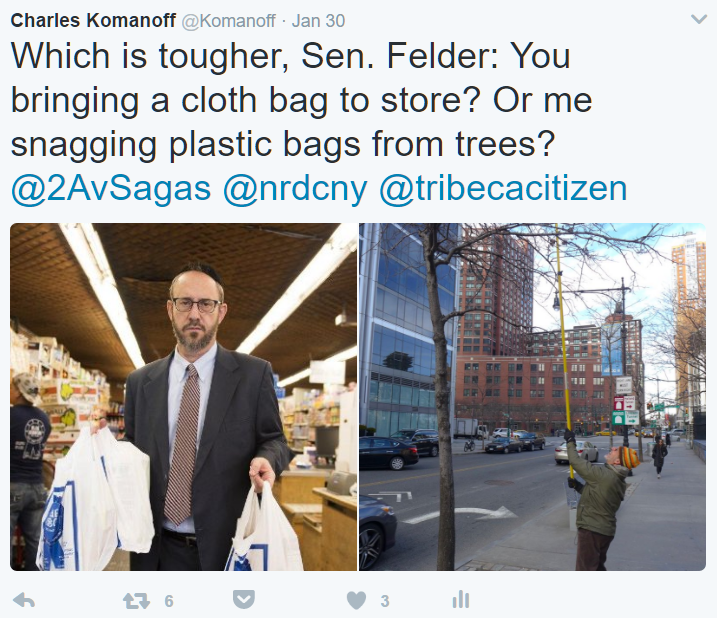 State Senator Simcha Felder calls the nickel bag fee a ploy to “shake New Yorkers own every time they shop just for the privilege of using a plastic bag.”

Sadly, that logic hasn’t worked on a handful of legislators. Perhaps they can’t make the imaginative leap to picture the simple but permanent behavior change. Or maybe they look upon the bag fee as an affront. Either way, the anti-fee forces might actually carry the day. Their repeal bill has cleared the NY State Senate, and now only the Assembly and the Governor stand in the way.

Why fight for the fee when a megalomaniacal demagogue in the White House is persecuting immigrants, refugees and Muslims and preparing to blow up the Paris climate accord? That one’s simple. The battles aren’t either-or, they’re both-and. We can progress on multiple fronts. Later that Sunday, my wife and I rallied with over 10,000 other New Yorkers in Battery Park, against the new administration.

Earlier this month, the New York Times asked Jennie Romer, the activist founder of Plastic Bag Laws, to comment on the rollback effort in Albany. “It seemed to be a very simple incremental policy to make real environmental change,” she told the Times. “And it has turned out to be an incredibly difficult fight.”

Yes, even seemingly incremental progress can be hard as hell. Still, we don’t stop.