With the C.E.O. of Exxon Mobil now officially nominated for Secretary of State, the oil and gas giant is being cast as a kinder and gentler fossil fuel behemoth. Here’s the New York Times editorial board’s weekend take:

[Rex] Tillerson assumed the role of chairman and chief executive of Exxon Mobil in January 2006, and during his tenure the company acknowledged, for the first time, the science underlying climate change. It has said it supports the creation of a carbon tax, which most Republicans have opposed, and it also supported the Paris climate agreement, a major focus of Mr. Kerry’s time in office. Mr. Trump has vowed to abandon the climate pact. In May, Mr. Tillerson told shareholders that “we believe that addressing the risk of climate change is a global issue,” adding that it would require the cooperation of governments, businesses and individuals. (Rex Tillerson, Exxon Chief, Is Expected to be Pick for Secretary of State, Dec. 10, emphasis added)

Missing in this creampuff thumbnail, of course, is #ExxonKnew — the revelations from Inside Climate News and others that Exxon executives suppressed company scientists’ findings in the late 1970s warning of possible catastrophes from the greenhouse effect, and then led a propaganda campaign to block solutions. The editorial also sets an absurdly low bar, in effect giving Tillerson and Exxon credit for “acknowledging” (though not resoundingly endorsing) the scientific consensus on anthropogenic climate change.

Also missing — and the primary subject of this post — are any specifics as to the carbon tax level Exxon supposedly endorses. 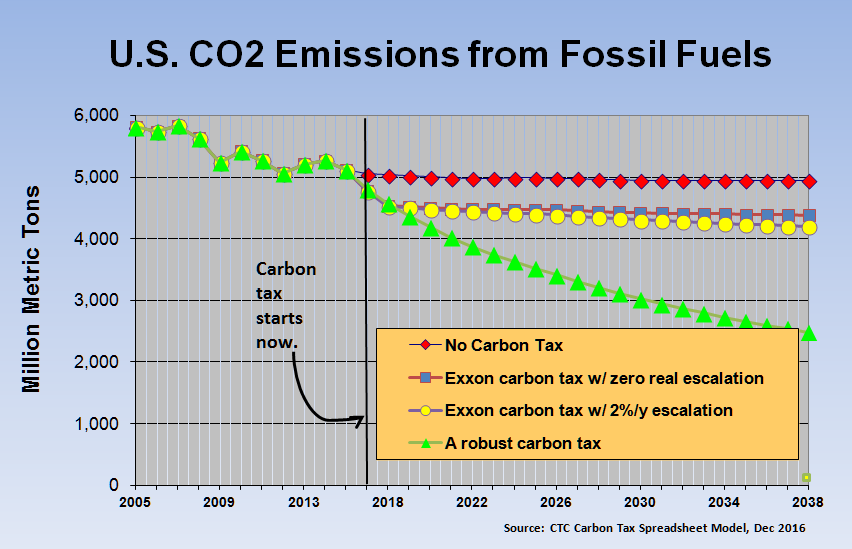 It’ll take more than a token carbon tax to make a big dent in emissions.

A modest carbon tax, say $20 to $40 per ton of carbon dioxide emissions, would aid lower-carbon natural gas in substituting for high-carbon coal, an outcome that would dovetail with Exxon’s gas-heavy but coal-light resource base. Whereas a robust carbon tax, one that would ramp up briskly and reach triple digits within a decade, would not only kayo coal but also deal a heavy blow to oil and gas by giving a big lift to carbon-free renewables and shrinking overall energy demand.

Needless to say, there’s zero evidence that Tillerson or anyone associated with Exxon has ever voiced support for a robust carbon tax.

Indeed, it’s nearly impossible to find even a single Exxon statement specifying the amount of a carbon tax the company would support. This morning we combed a bunch of stories reporting on Exxon’s support for carbon taxing:

None of these news stories or opinion pieces mentioned a tax level. To model the Exxon carbon tax shown in our graphic, we went back in time to a 2009 D.C. meeting at which a couple of Exxon “governmental relations” officials sat down with carbon tax advocates. The off-the-record session was short on specifics, but the Exxon reps floated a $20 a ton figure. I’ve raised that to $25, more than capturing seven years of inflation, but have kept the tax level flat in real terms over time.

The graph makes apparent how little such a modest tax would reduce carbon emissions. The “robust” carbon tax shown — modeled after the McDermott carbon tax that would start at $11.34 per ton of CO2 and increase by $11.34/ton annually — would, by 2040, be eliminating 4-5 times as much CO2 from U.S. smokestacks and tailpipes as the “Exxon carbon tax.”

In carbon taxing, as elsewhere, the devil truly is in the details. Exxon’s rebuttal, if we can call it that, is a Dec. 2015 blog post by v-p Ken Cohen, ExxonMobil and the Carbon Tax, which is long on the company’s business practices (it uses a “proxy carbon price” in its planning) but woefully short on actual policy support for carbon taxes, for the very good reason that such support has been effectively non-existent.

U.S. Senator (and climate stalwart) Sheldon Whitehouse (D-RI) said this more pointedly in a Jan. 2017 Washington Post op-ed: “Take no comfort in Tillerson’s statements that climate change is real and that Exxon supports a carbon tax; that message was never delivered to the fossil-fuel industry’s political gun decks and is a perhaps a deliberate false flag.”

But the last word — missing words, actually — goes to Tillerson himself, as shown in this May 2017 tweet from Inside Climate News’ Jack Cushman:

Rex outlined his world view to State Department employees today, and said not one word about global climate change. https://t.co/Tv4UZhI4fG

Original graphic has been revised to include two different “Exxon carbon taxes.” Model them, or your own, using CTC’s carbon-tax spreadsheet (Excel file).