Following is the text of my op-ed in today’s New York Daily News. — C.K.

Donald Trump calls global warming a hoax. In a speech on energy last week, he said “75% of our rules and regulations are bad for us.” Lambasting President Obama’s Clean Power Plan, he promised to “save the coal industry,” one of America’s single biggest polluters.

Trump, of course, also says he wants clean air — “beautiful, clean air.” And why wouldn’t he? Clean air has been very good to his businesses.

Not just good, but essential — the secret sauce, you could say, in Trump’s real estate empire. So secret that even he is probably clueless that clean air helped him amass the riches that have placed him one winning campaign from the White House. 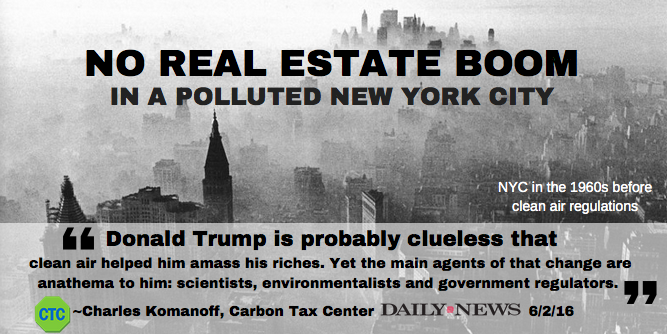 Part of the reason families, startups and empty nesters were fleeing NYC not long ago.

The true extent of Trump’s wealth may be murky, but one thing is clear: His financial fortune has been bound up with New York City’s. If not for the city’s revival since the “Drop Dead” 1970s, Trump’s vaunted deals would have been less profitable, his name less marketable and the worldwide branding of his hotels, casinos and golf courses an impossibility.

You may not know it, but New York’s resurgence owes much to its healthier air. The reduction in violent crime has mattered most, of course, along with the striving energy of a million or more immigrants. Improved mass transit and public schools also rank high.

But no one should discount the part played by cleaner air. Over the past half-century, pollution levels in New York City have plummeted, making the air safer to breathe and lending sparkle to the cityscape. Lung bombs from diesel buses have virtually vanished, along with the old meme that breathing here is tantamount to inhaling two packs of cigarettes a day. This striking if unheralded improvement has helped attract and keep young families, startups and empty nesters.

The change in the air is now built into real estate values. Every New York developer and builder has been a big beneficiary, Trump included.

Yet the main agents of that change are anathema to him: scientists, environmentalists and government regulators.

In the mid-20th century, meticulous scientists documented the damages from polluted air, and grass-roots campaigners demanded action. Getting and enforcing regulations took decades, but the changes were impressive, and perhaps nowhere more than in New York City: tailpipe control devices, sulfur reductions in fuel and filters on smokestacks and furnaces. Later came systemic changes like investing in mass transit instead of highways and replacing incineration with recycling.

All were fought as too costly to job-creating businesses. In the end, though, the city didn’t just survive, it thrived. Fortunes were lost in polluting minerals like coal and lead but new ones were made in urban real estate.

The prime environmental challenge today is global warming, which Trump derides as a moneymaking hoax. He should know better.

First, rising seas pose an existential threat to Trump’s New York and Florida holdings. Even beautiful sea walls likely won’t save Manhattan and Miami, and in any event it won’t be Mexico paying for them.

Second, the evidence-based paradigm that catalyzed action on air pollution in the 1950s and 1960s is the very one Trump now ridicules for requiring action on climate change. 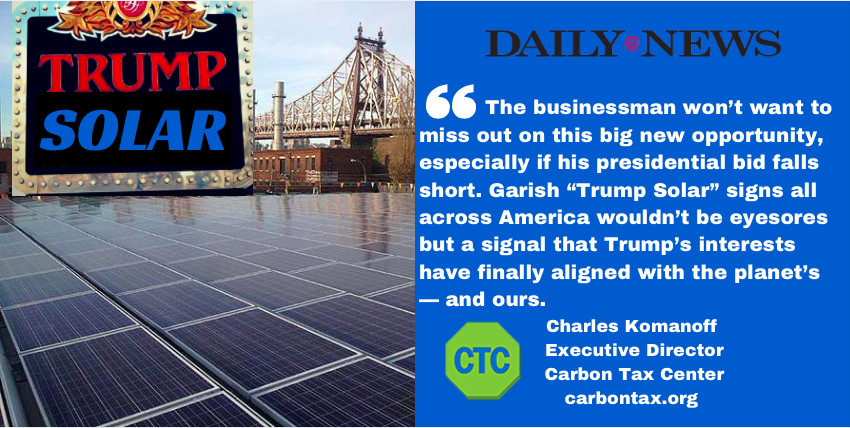 Impossible? Not with a robust carbon tax.

Still, Trump is half-right on one point: Global warming, while hardly a hoax, can be a moneymaker. New fortunes will be there for the taking in the solar and wind industries, especially if the next administration makes the fossil fuel industry pay for climate pollution with carbon fees.

The businessman who trumpets his acumen in exploiting the U.S. tax code won’t want to miss out on this big new opportunity if his presidential bid falls short.

Garish “Trump Solar” signs all across America wouldn’t be eyesores but a signal that Trump’s interests have finally aligned with the planet’s — and ours.