On December 30, a crowd of climate activists trooped to the office of Washington’s Secretary of State in Olympia, hauling boxes of signatures with a message from hundreds of thousands of Washingtonians: We want Washington to enact a carbon tax and make our state a U.S. leader on climate action. By filing the signatures before the year-end deadline, the group ensured that Washington must consider a carbon tax, either by a vote of the legislature or as a ballot measure in November.

We first reported on Carbon Washington’s I-732 initiative last June, when the grassroots group had collected 50,000 signatures. Since then their campaign grew exponentially, gathering a total of 362,000 signatures and gaining prominent endorsements both locally and nationally. 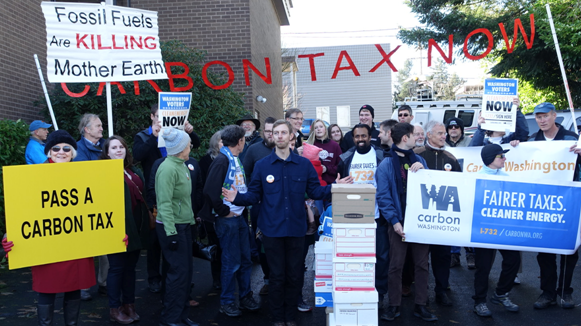 The signature total far surpassed the 246,372 valid signatures required to advance the initiative to the legislature. In fact, it puts I-732 in Washington State’s all-time top 10 by most signatures collected. This is especially impressive given that Carbon Washington relied on volunteer labor and grassroots donations, disproving skeptics who said collecting the necessary signatures was impossible without at least $1 million to hire paid petitioners.

Now Washington’s divided state legislature will consider the measure — the 2016 session runs from January to March. I-732 was designed to meet fiscal conservatives halfway; it is revenue-neutral, pledging carbon tax revenues to reduce the state sales tax. But while the measure has been endorsed by some prominent Republicans, including Harvard economics professor (and former Romney advisor) Greg Mankiw, it has yet to win support from Republican legislators.

If the legislature doesn’t enact I-732, the measure will appear on the ballot in November, alongside what will almost certainly be a hotly contested presidential election. Advocates hope this will lead to higher voter turnout, especially among younger voters, which might boost the measure’s chance to pass.