Will Renewables Tip the U.S. into Taxing Carbon?

“Happy solar voters.” That was the picture caption for the smiling solar-powered family that led David Roberts’ post yesterday, “How inefficient climate policies can build support for efficient ones.”

Roberts, who blogged on energy and climate politics for Grist before moving over to Vox this year, counsels carbon-tax advocates to put “Green Industrial Policy” first. That way, solar and wind assemblers and installers and their happy consumers can develop into constituencies strong enough to prevail over the influence and inertia that will otherwise throttle carbon taxes. 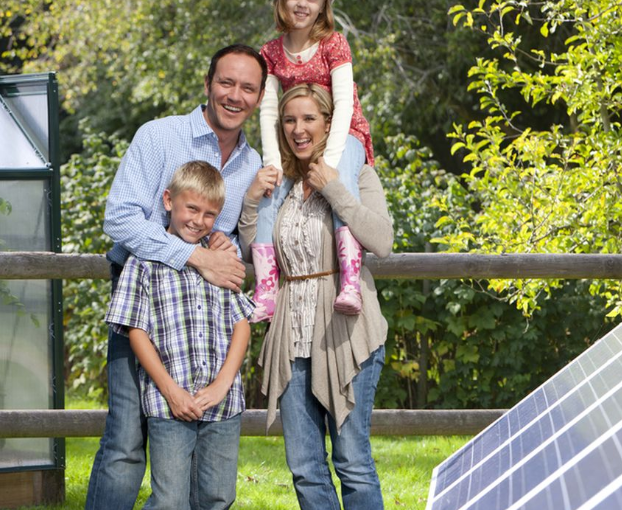 Will these smiles translate into carbon tax legislation?

Roberts’ post is of a piece with his long-standing disdain for carbon tax campaigners, and he lectures us here as well, insisting we “get over [our] obsession with carbon pricing.” But it also builds on a new article in Science (subscription required) by researchers at U-C Berkeley who surveyed worldwide progress, or lack thereof, in adopting carbon taxes or cap-and-trade permit schemes. “Of the 54 countries and subnational entities that adopted a carbon pricing scheme by 2013,” they report, “nearly two-thirds installed a Feed-in Tariff or Renewable Portfolio Standard before setting up the pricing scheme.”

That’s good to know, if a bit skeletal. The fact that FIT’s or RPS’s preceded the pricing measures doesn’t prove they had to, though they surely helped lay the foundations. Moreover, if advocates and policymakers chose to start with clean-energy subsidies, it might have been because they hoped positive incentives would be enough to move quickly from carbon fuels.

The more pertinent question, though, is whether the U.S. is now at the political take-off point where carbon-pricing can make it into policy. Wind turbines will account for 5 percent of U.S. electricity this year (and more than 15% in seven states last year), and solar-photovoltaic power is growing like gangbusters, thanks largely to Green Industrial Policy galore: state Renewable Portfolio Standards and federal production tax credits (for wind) and accelerated depreciation (for solar). Are the “demonstration” effect and jobs base from renewables strong enough to make the “winning coalition for climate policy” (that’s the Science article title) the U-C Berkeley authors are calling for?

Let’s hope so. Without a robust carbon tax, zillions of electrons in millions of backyard PV arrays are going to be consumed in-house instead of helping the grid back out fossil-fuel electricity. Without a carbon tax, gas-guzzlers and long commutes will keep “extreme” fossil fuels in business, along with their emissions. Granted, a carbon tax isn’t visually arresting like backyard panels. But the innovation and system changes it will catalyze will be at least as instrumental in getting us off carbon.