InsideClimate News just posted this piece as a guest editorial — today’s entry in a series leading to and during Climate Week in New York City.

Which is mightier—the obstacles to enacting a U.S. carbon tax, or the tax’s unique capacity to drive down global-warming emissions quickly, massively and equitably?

At the Carbon Tax Center we’ve bet on the latter. And our bet will only get better if the climate movement coalesces its advocacy and organizing around a carbon tax.

Making polluters pay to emit carbon isn’t just textbook economics and basic fairness—though it is those things. A carbon tax is the only way for the climate damage caused by burning fossil fuels to be brought inside the arc of individual and societal decision-making that determines how much of those fuels society uses and, thus, how much carbon it emits. 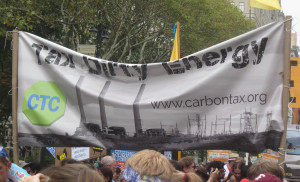 Our banner sagged a bit during the People’s Climate March. Our message couldn’t be more clear.

These decisions range from the immediate and quotidian: take transit vs. car, refill at the tap vs. buy bottled water; to institutional and far-reaching: build airplane frames with ultralight composites vs. aluminum, locate in town vs. on the outskirts, contract with a wind farm vs. a coal generator.

Without a tax on carbon emissions, every choice like these―and billions are made daily―will remain so rigged that fossil fuels will never yield their central position in world energy supply—or at least not fast enough to keep climate change from spiraling out of control. But a tax gives us a fighting chance to keep climate tipping points at bay and stave off global warming’s most dire effects.

Notice I said carbon tax, not “price on carbon.” Forget cap-and-trade. It’s too complicated to resonate with the public, and too prone to manipulation and gaming. Moreover, the “revealed” prices from markets in carbon permits will always be too volatile for low-carbon entrepreneurs to bank on and for treasury departments to count on.

For a carbon price to be revenue-neutral—as I believe it must to command broad and bipartisan support—the revenue it will generate from one year to the next must be reasonably predictable. That means a knowable price, which only a carbon tax provides.

Why not pursue the politically easier path of subsidizing clean energy? Empirical evidence, for one thing. As we demonstrated in a report to the Senate Finance Committee earlier this year, even a perfectly tailored subsidies regime won’t deliver half as much carbon reduction as an equivalently priced carbon tax. Not to mention that subsidies require taxpayer dollars.

What about the EPA Clean Power Plan? Ingenious and well-meaning, to be sure. But too little, too late. The cuts apply only to electricity, they’re measured against a high (2005) baseline, and the states have until 2030 to comply. These concessions, while defensible on political grounds, have whittled down the plan’s target to a mere 7 percent cut in total U.S. CO2 emissions. And even that will necessitate navigating a minefield of litigation.

Why not simply mandate ever-decreasing carbon contents in every sector of use? Standards have helped make autos and appliances far more efficient, but making them the central climate strategy would require thousands of efficiency standards, each one bitterly contested. Moreover, standards by nature are reactive and binary, which leaves huge savings untapped. Not so for a carbon tax, which incentivizes each and every investment and behavior that cuts emissions.

The “gold standard” for a carbon tax is the Managed Carbon Price Act introduced in May by Rep. Jim McDermott (D-Wash.). The tax starts modestly, at $15 per ton of carbon dioxide, but rises stepwise to pass $100 within a decade. By effectively raising the prices of every BTU of natural gas, oil and, especially, coal burned in the United States, the McDermott bill will, by our estimates, cut U.S. carbon emissions by 30 percent by its 10th year―a pace nearly seven times faster than the EPA plan.

Not only that, the McDermott bill taxes the carbon content of imports from non-taxing countries, protecting U.S. manufacturers from unfair competition while motivating other nations to tax their climate pollution. It taxes methane and other greenhouse gases at their CO2 climate-change equivalents. And it returns every dollar of tax revenues to individuals as pro rata dividends—a simple but profound design that just might placate conservatives and other fiscal hawks. This “fee and dividend” revenue treatment will buffer two-thirds of U.S. households, including most low-income families, from the energy price increases the tax will entail. (Rep. John Larson’s America’s Energy Security Trust Fund Act of 2014 also specifies a robustly rising, revenue-neutral emissions tax.)

If the biggest block to game-changing climate legislation has been the fossil fuel-funded denialist movement, the timidity of climate advocates about carbon taxing may qualify as the runner-up. But as yesterday’s big march in New York City showed, the climate movement is rising and the American public may finally be stirring. Time is dreadfully short. Whatever qualms we’ve had about the t-a-x word must yield to opportunity and reality.