Washington is still abuzz with the surprise defeat of House Majority Leader Eric Cantor in this week’s Virginia Republican primaries. We asked former U.S. Under Secretary of Commerce for Economic Affairs Rob Shapiro to comment. Rob, the co-founder and chairman of Sonecon, LLC, an advisory firm that analyzes changing national and world economic and political conditions and their relationship to government policies, is a member of CTC’s board of directors. — C.K. 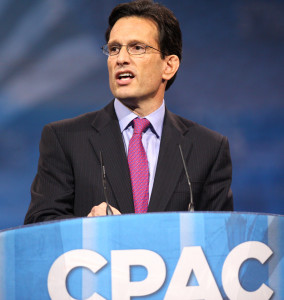 Following Eric Cantor’s unceremonious primary loss, a carbon-tax climate program remains hostage to the divisions cracking apart the Republican Party. Majority Whip Kevin McCarthy, who represents Bakersfield and the southernmost part of California’s San Joaquin Valley, almost certainly will succeed Cantor as House Majority Leader, with no discernible difference in the GOP’s stance on climate or anything else.

Some pundits insist that Cantor’s defeat will make establishment Republicans more sensitive to Tea Party activists. But apart from raising the debt ceiling to avoid an economically (and politically) catastrophic debt default, when have the GOP’s traditionalists stood up to their ideological fringe on any significant issue? With even once-stalwart Republican supporters of climate reform sidling towards the caucus of climate-change-deniers, serious reforms that require Congress’ approval will attract little if any support from any Republican.

The best strategy available, then, is to hammer away at the rising and frightening costs, region by region, of Congress’ failure to address climate change. The aim here is to ratchet up the political costs to some members of the GOP of sticking with their Party’s current dismissal of modern science. Were he not in the leadership, McCarthy himself, whose district is near the epicenter of California’s crippling drought, might be vulnerable to this strategy, And he’s not alone.

Hopefully, this approach can peel off a few Republicans members in swing districts and states or, alternatively, defeat enough of them to give Democrats control of both Houses. If and when that happens, the challenge will be to bring back Democratic members, especially in coal-dependent districts and states, many of whom have become nearly as wary of climate policy as the Tea Party.