U.S. carbon emissions have been dropping, thanks to a confluence of factors, led by stagnating household incomes, cheap fracked methane, booming wind power, and “peak driving.” From 2005 to 2012, releases of CO2 from fossil fuel burning fell an estimated 685 million metric tons, from 5,906 MMT to 5,221. The lion’s share of that reduction, 379 million metric tons, came in the electricity sector, as wind and gas grabbed market share from coal (3 percentage points went to wind and nearly 12 points to gas) while total power generation stayed flat. 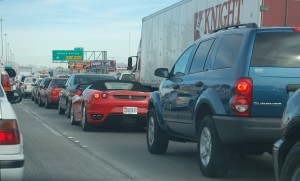 The rush to fuel efficiency is more of a trickle.

The second largest emissions source, which I call “Personal Ground Travel” (driving) to distinguish it from goods movement (mostly by trucks), shrank only modestly, from 1,246 MMT to 1,184, a drop of just 62 million metric tons, or 5%. So imagine my surprise when I read in a New York Times editorial last month that “increased fuel efficiency helped reduce carbon dioxide emissions from passenger cars by 16 percent from 2005 to 2012.”

That August 10 editorial, A Clean-Car Boom, was nearly euphoric. Here’s its lede:

In a welcome development for the planet, the cars on American streets are becoming much more climate-friendly much sooner than many had expected. Consumers are increasingly buying fuel-efficient hybrid and electric vehicles thanks to breakthrough innovations and supportive government policies.

True enough about consumers buying … not so the earlier part about emissions dropping by 16%. In fact, in the few seconds it took to follow the editorial’s link, it became clear that the 16% passenger-car reduction applies just to new autos rather than the entire sector, which necessarily takes many years to “turn over” to more-efficient models. What also became clear, in back-and-forth e-mails w/ the editorial board, was that the Times wasn’t going to publish a correction clarifying that CO2 emissions from cars fell just 5% from 2005 to 2012, not 16%.

“I assume [the writer of the editorial] meant new models, not entire existing fleets and that is the way readers would see it,” an editor advised me in an e-mail. “I will have to check with EPA and DOT,” he added, ignoring my offer to lead him to the numbers.

Would readers “see it” as the editor assumed? Would they get that CO2 reductions from driving were only inching along rather than galloping as the Times editorial suggested? I’m not sure. As I wrote to the editor in my final e-mail:

Why does this matter (apart from getting numbers right, generally)? A certain complacency has set in about heartening/surprising progress in cutting U.S. greenhouse gas emissions, especially in mainstream environmentalist thought. Indeed, this complacency may help explain how the [editorial] writer slipped into his/her error. More importantly, it has implications for policy/politics around climate, carbon taxing, “radical” vs. “incremental” approaches, etc.

The implications I had in mind are obvious but worth saying: If you “learn” that regulations have already eliminated one-sixth of carbon emissions from driving in just seven years, you’ll be more inclined to trust that further application of regulations can get induce more reductions. And if regulations are up to the task, the need to take on the tougher job of enacting a meaningful carbon tax dissipates.

Would that were so. But regulations aren’t up to the task of eliminating 80% or more of U.S. CO2 emissions. They’re intrinsically piecemeal, long lead-time, backward-casting, and suboptimizing. They also produce no revenue, thus giving them zero salience in any possible budget deal. As I wrote here late last year, only a carbon tax can

broadcast …  a clear price signal to begin shifting millions of decisions toward less energy and emissions — big decisions that determine design of vehicles and transport and that set the pace and nature of investment in low- and non-carbon energy; as well as the full gamut of household-level decisions …  Almost as importantly, a robust carbon tax changes the culture by broadening the definition of pollution and valorizing conserving behaviors with monetary rewards.

Or, as CTC’s Washington rep, James Handley, put it, in an early-2012 post dissecting putative EPA regulations of CO2 emissions from power plants, “EPA regulations might, optimistically, achieve significant near-term reductions, albeit at a higher cost than a CO2 pollution pricing system. But more importantly, those regulations can’t be expected to induce further innovation.”

Indeed, James’s post drew on work by noted Resources for the Future economist Dallas Burtraw to conclude that in the near term, EPA regulation of greenhouse gases was unlikely to reduce carbon pollution any more than a small carbon tax, say, one starting at $10/ton of CO2 and rising by just $3.50/ton per year. “Moreover,” James noted, “it’s not clear how much further EPA regulation could reduce emissions after 2020. That’s because regulations are essentially static and do little to induce innovation or to reduce fossil fuel demand via conservation.”

With or without a correction by the Times, there’s no getting around the need for a robustly rising carbon tax.

Separately, we call your attention to a new report by prolific automobile researcher Michael Sivak and two colleagues at the University of Michigan Transportation Research Institute, “A Survey of Driver Opinion About Carbon Capture in Vehicles.” Using an opinion survey, the three inferred that Americans “appeared to be willing to pay about $100 for a 20% reduction in [their car’s] carbon dioxide emissions.” Applying an average 25 mpg fuel economy for newly purchased vehicles, an annual distance driven per vehicle of 11,000 miles, and a typical 11-year vehicle life, that 20% reduction equates to 9.5 tons of CO2. A willingness to pay $100 to eliminate 9.5 tons equates to just $10-$11 per ton of CO2 removed, suggesting that relying on Americans’ altruism isn’t going to do the heavy lifting of reducing carbon emissions.