The Carbon Tax Center’s Capitol Hill briefing is just two days away (Dec. 9), and we couldn’t have choreographed a more turbocharged buildup than the one provided over the past few days by The New York Times and The Wall Street Journal.

Thomas Friedman’s column in today’s Times, The Real Generation X, is his most full-throated call ever
for a carbon tax. It’s a welcome return to his  earlier editorializing in favor of carbon taxing from his recent slight tilt toward cap-and-trade (emphases added): 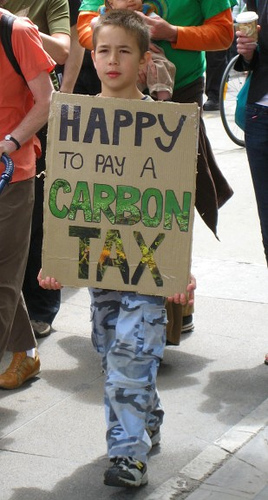 It makes no sense to spend money on green infrastructure — or a bailout of Detroit aimed at stimulating production of more fuel-efficient cars — if it is not combined with a tax on carbon that would actually change consumer buying behavior.

Many people will tell Mr. Obama that taxing carbon or gasoline now is a
“nonstarter.” Wrong. It is the only starter. It is the game-changer. If you want to know where postponing it has gotten us, visit Detroit. No carbon tax or increased gasoline tax meant that every time the price of gasoline went down to $1 or $2 a gallon, consumers went back to buying gas guzzlers. And Detroit just fed their addictions — so it never committed to a real energy-efficiency retooling of its fleet. R.I.P.

If Mr. Obama is going to oversee a successful infrastructure stimulus, then it has to include not only a tax on carbon — make it revenue-neutral and rebate it all by reducing payroll taxes — but also new standards that gradually require utilities and home builders in states that receive money to build dramatically more energy-efficient power plants, commercial buildings and homes. This, too, would create whole new industries.

Demonstrating the bipartisan support for carbon taxes from across the political spectrum, the Friedman op-ed followed two powerful Wall Street Journal columns this week.  A Dec. 3 op-ed by Ralph Nader and Toby Heaps, We Need a Global Carbon Tax, subtitled, "The cap-and-trade approach won’t stop global warming." makes a compelling case for pricing carbon emissions via a tax rather than a trading scheme:

A global carbon tax levied on a relatively small number of large sources can be monitored by satellite and checked against the annual surveillance of fiscal and economic polices already carried out by IMF staff. Thus, the accounting involved is much more precise and much less subject to the vagaries of corruption and conflict over which industries and companies get their free handouts of carbon credits — carbon pork — than in a cap-and-trade system.

Nader and Heaps go on to provide "three reasons why countries, such as China and India, that have traditionally resisted any notion of a common responsibility to make current polluters pay would do well to enlist in this effort (emphases added)."

First, while there is
no limit on the downside for missing a hard cap, with a carbon tax you
just pay as you go. If a fast-growing
country like China accepted an emissions cap and then overshot it, they
would have to purchase carbon credits on the international market. If
they missed their target by a lot, carbon credits would be scarce, and
purchasing them would suck dry their foreign exchange reserves in one
slurp. That’s why a carbon tax is much easier to swallow and, anyway,
through the power of the price signal, it would produce the same
desired result as a hard cap.

Second,
administering billions of dollars of carbon credits in a cap-and-trade
system in an already chaotic regulatory environment would invite a civil war between interest groups seeking billions in carbon credit handouts and the regulator holding the kitty.
By contrast, a uniform tax on CO2 emissions levied at a small number of
large sites would be relatively clear-cut. During the Montreal Protocol
talks in the 1980s, India smartly balked at a suggestion to phase out
CFCs in certain products and not in others because of the chaos that
would result from the ambiguity.

Third, key people in China read
our newspapers. They see the ominous clouds of protectionism under the
guise of environmentalism in bills like Lieberman-Warner and they don’t
want to be harmed; neither should we, given the trillions of dollars of
Treasury bills they hold. Showing compliance with a harmonized
carbon tax at a small number of large bottleneck points would be
child’s play compared to the chaos of cap-and-trade.

That was Wednesday. On Friday, the Journal raised its own profile with an editorial, Some Carbon Candor: A climate guru rebukes his mates on cap and trade.

The "climate guru," of course, is Dr. James Hansen, director of NASA’s Goddard Institute of Space Studies, and headliner of our Hill briefing this Tuesday.
The Journal noted that "Mr. Hansen endorses a straight carbon tax as
the only ‘honest, clear
and effective’ way to reduce emissions, with the revenues rebated in
their entirety to consumers on a per-capita basis. ‘Not one dime should
go to Washington for politicians to pick winners,’ he writes."

The Journal editorial continues with a clear statement of its preference for a carbon tax over cap-and-trade (emphases added):

The
risks of fossil fuels remain speculative, but if they really are the
apocalypse of Mr. Hansen’s prophecies, then the cleanest remedy is a
tax. That would raise energy and all other prices as the incentive for
new technologies and investments. But a tax would be neutral,
eliminating the market distortions caused by subsidies and regulation,
and the proceeds could be used to offset other taxes. The
transition to a world in which growth is not tied to carbon would still
be long and extremely expensive, but a tax would be the least painful
way to get there.

"A tax should be called a tax," Mr. Hansen writes. "The public can understand this and will accept a tax if it is clearly explained and if 100 percent of the money is returned." Clearly the man is not standing for elective office.
Beltway
sachems prefer posturing that disguises the cost of rising energy
prices, such as cap and trade. This "subterfuge," as Mr. Hansen terms
it, shifts the direct burden onto businesses, which then pass it along
to consumers. Congress may flatter itself that it is saving mankind,
but what the Members really want is a cap-and-trade windfall that they
can redistribute in the green pork of Mr. Obama’s "new energy
economy," whatever that means.

To be fair, carbon tax revenues could also end up as green pork. But
the transparency of a carbon tax — from the candor in its name to its frank acknowledgment of its impact on energy prices — militates in
favor of a revenue-neutral outcome in which the revenues are
distributed or tax-shifted to American families rather than skimmed off
by political and corporate rentiers.

Why the carbon tax trifecta this week? While
we can’t know precisely what led Mr. Friedman to go all out today for a carbon tax (rather than cap-and-trade), perhaps the financial meltdown has played a big
part  by opening up political space for bold action and discrediting the notion of creating another trillion-dollar market in
arcane securities. As for The Journal, while it might prefer to to
stifle any move toward carbon emission pricing, its
straightforward arguments for the relative efficacy of carbon taxing
over a cap-and-trade scheme are welcome.

In any event, the setting couldn’t
be more propitious for our carbon tax briefing this Tuesday, which the
Carbon Tax Center has organized along with the Climate Crisis
Coalition, the Environmental and Energy Study Institute, Friends of the
Earth, and the Friends Committee on National Legislation. As a side-benefit, the media buzz might help convince C-Span to provide live
video. The briefing,
featuring not only Dr. Hansen but other climate-policy experts Gilbert
Metcalf, Robert Shapiro and James Hoggan, hosted by Rep. John Larson
(D-Conn.), who was just elected chair of the House Democratic Caucus,
and moderated by FoE president Brent Blackwelder, is in Rayburn House
Office Building B318 and runs from 9:00 a.m. to 11:30 a.m. Tuesday. We
hope to see you.