The Other 49 States (besides WA)

This page covers — or at least touches on — carbon-tax campaigning and organizing in states other than Washington.

These bulleted links can help you navigate quickly around this page:

The Beaver State is the locus of the most detailed examination of a carbon tax for any U.S. state to date.  Oregon’s legislature allocated $200,000 to study the effects of a state-wide carbon tax. The result was Carbon Tax and Shift: How to Make it Work for Oregon’s Economy, by economists at Portland State University’s Northwest Economic Research Center, and released in March 2013. The clearly written and gorgeously designed 36-page report examined a tax based on British Columbia’s carbon tax. 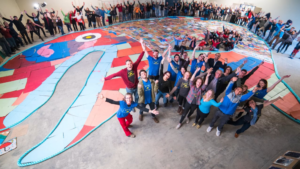 Oregon carbon tax supporters at “Salmon at the Redd”

The Oregon tax, starting at $10/ton of CO2 and rising by $10 per year to $60/ton, or roughly twice the level of BC’s tax, would, by 2025, reduce the state’s greenhouse gas emissions by 12-13% below baseline projections and generate over $2 billion a year in revenue, according to the report. The carbon tax outlined in the study became the basis of HB 3252, a bill aimed at establishing a state-wide carbon tax. The grassroots movement to advance the tax was led by Oregon Climate, which spread awareness via canvassing, tabling and lobbying. Oregon Climate also sought to bridge art with climate advocacy, culminating in “Salmon at the Redd,” a community project in which residents created tiles for a mosaic illustrating what they loved about their state.

Unfortunately, the carbon tax campaign was effectively pre-empted by Senate Bill 1547, which in 2016 established a Renewable Portfolio Standard mandating that Oregon utilities ramp up wind and solar facilities to supplement the state’s considerable hydro-electric supplies. Oregon Climate has shifted its focus to a national effort to help other localities advocate for carbon pricing.

New York should be a strong venue for pursuing a state carbon tax. In October 2012, Superstorm Sandy made a climate-change believer of Gov. Andrew Cuomo. who declared, “[C]limate change is a reality, extreme weather is a reality, it is a reality that we are vulnerable,” after the tidal surge from the storm inundated coastal communities and brought unprecedented devastation to hundreds of miles of shoreline. Moreover, not just coastal residents but upstate citizens politicized by fracking have rallied around the Jacobson-Delucchi “100% Wind, Water and Sunlight” global scenario for NY State, as Jacobson and co-authors propounded in their compelling journal article in Energy Policy.

Two Carbon Tax Center officers — director Charles Komanoff and board chair Alex Matthiessen — outlined the rationale for and distributional impacts of a potential $20/ton (of CO2) NY State carbon tax in a 2013 op-ed for the Huffington Post (cross-posted here). Our draft brief envisions applying the lion’s share of carbon tax revenues to reduce the statewide sales tax rate by a full percentage point — paralleling the sales tax cut in Carbon Washington’s Measure I-732, discussed above. “Leftover” revenues could help fortify the state’s infrastructure to withstand future storms and/or expedite and incentivize homeowners’ and business owners’ installation of photovoltaic electricity generating capacity. Comments on this concise (6-page) draft document are welcome

A NY State carbon tax bill with a more aggressive design was introduced in Sept. 2015 by two Democratic legislators, Assemblyman Kevin Cahill of Dutchess County and Sen. Kevin Parker of Brooklyn. Their bill, A8372 Cahil / S6037 Parker, starts taxing CO2 emissions from coal, oil, natural gas and biofuels at $35 per ton and increases the rate annually by $15/ton, to a ceiling of $185 per ton. The bill proposes returning 60% of revenues to low- and moderate-income households, with the remaining funds used to prepare for climate change, invest in renewable energy, and build transportation infrastructure.

Environmental advocates from around New York State including CTC director Charles Komanoff met at the SUNY New Paltz campus in September, 2015 to discuss climate campaigning and carbon tax organizing. One of the participants, New York League of Conservation Voters Member Andrew Ratzkin, previously outlined the case for a NY State carbon tax in this compelling op-ed in Crain’s New York Business, in July, 2015. In mid-2016 Ratzkin published a lengthy article in the Columbia Journal of Environmental Law, You Say You Want a REV Solution, critiquing the state’s “Reforming the Energy Vision” blueprint as inferior policy to a statewide carbon tax.

The bay state’s Global Warming Solution Act of 2008 mandated a 25% reduction of CO2 emissions below 1990 levels by 2020 and an 80% reduction by 2050. Befitting its “promising” status in CTC’s report, Opportunities for Carbon Taxing at the State Level, Massachusetts is a hotbed of advocacy for a statewide comprehensive carbon tax to meet and surpass those targets.

The most politically popular bill appears to be S.1821, An Act combating climate change, sponsored by State Senator Mike Barrett (D-Lexington). Barrett’s nearly identical 2016 bill S.1747 had 47 co-sponsors, and this year he has 64, nearly one-third of the legislature,

The Barrett bill specifies an initial carbon fee of $10/ton of CO2, increasing in $5/ton annual increments to $40/ton, after which the legislature will consider increases or decreases. The bill establishes a fee-and-rebate system, with 100 percent of carbon revenues collected from fossil fuel providers returned pro rata to state residents and to employers based on the number of employees.

S.1821 will direct additional rebates to households in car-dependent areas and to energy-intensive businesses. As with the similar Citizen Climate Lobby fee-and-dividend proposals at the federal level, the rebate system is intended to be income-progressive (with low- and moderate-income households being net beneficiaries while wealthier households would be net payees) while preserving all households’ incentives to reduce fossil fuel use in order to pay less in fees.

Reports by the Massachusetts Department of Energy Resources and Regional Economic Model Inc concluded that S.1747 would slash emissions while boosting employment and overall economic activity. 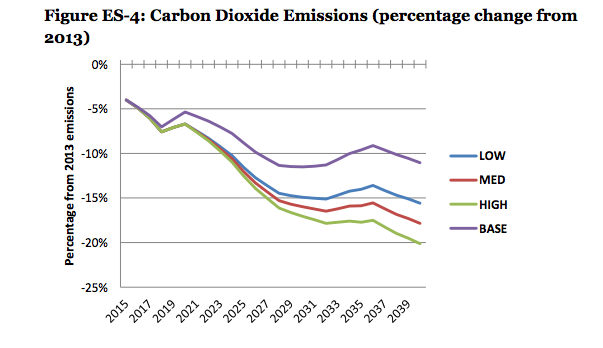 On the House side, State Representative Jennifer Benson (D-37th Middlesex) is sponsoring H.1726, “An Act to promote green infrastructure, reduce greenhouse gas emissions, and create jobs.” The Benson bill adheres to the Barrett bill’s carbon-fee-and-rebate model but dedicates 20 percent of revenues to fund green infrastructure directly, such as public transportation, renewable energy, energy efficiency, and protection against the expected impacts of climate change. With 80 percent of revenues applied to rebates rather than 100 percent, the Benson bill would likely have a somewhat less income-progressive outcome than the Barrett bill, though the difference would be attenuated by the green investments.

Analysis by the Massachusetts Department of Energy Resources suggests that carbon pricing would deliver the greatest CO2 reductions of any policy while enhancing state and local employment. Advocates are using those findings, along with the potential to cut health care costs through reduced air pollution, to convince Governor Charley Baker to support carbon pricing legislation.

In Jan. 2017, Dave Anderson of the Massachusetts-based Energy & Policy Institute posted a  provocative, well-documented piece, Under Rex Tillerson, ExxonMobil Lobbied Against Carbon Tax Bills. In his article Anderson revealed 2016 lobbying disclosures filed with the Secretary of the Commonwealth of Massachusetts indicating that a lobbyist paid by ExxonMobil opposed the revenue-neutral carbon tax bill S.1747, as well as other climate-related bills.

With its coastline-defined topography, the Ocean State is directly exposed to climate change impacts of rising sea levels, flooding and storms. Rhode Island is also home to U.S. Senator Sheldon Whitehouse, whose 100 weekly “Time to Wake Up” speeches on the Senate floor in 2013-2015 established him as Capitol Hill’s most forceful voice for climate action. The Senator’s American Opportunity Carbon Fee Act of 2014 would establish a national carbon tax.

Detail from REMI study of a Rhode Island carbon tax.

With federal carbon pricing blocked by the GOP, a coalition of RI environmental, faith and business groups formed Energize Rhode Island in 2015 to advocate for state carbon pricing legislation. In January 2016 State Rep. Aaron Regunberg (D-Providence) introduced House Bill 7325, along with 40 co-sponsors. H7325 specifies an initial carbon fee of $15/ton of CO2, increasing in $5/ton annual increments. Seventy percent of the revenue would be refunded via per capita and per employee rebates to Rhode Island families and businesses, with 25% invested in renewable energy and efficiency programs.

The Energize Rhode Island Coalition touts a REMI study finding that H7325 will create over a thousand new jobs in the first year alone — a major economic boost for a state whose 2014 population was just 1.055 million — while emission reductions quickly reach double digits. Job growth will continue apace in subsequent years, according to the study, as Rhode Islanders save much of the nearly $4 billion a year they now spend on fossil fuel energy, all of it imported from outside the state.

The conversation among policymakers in Vermont has begun to shift from whether the state should price carbon pollution to how, reports Tom Hughes of VPIRG, in Feb 2016.

The carbon-pricing campaign is led by Energy Independent Vermont, a coalition comprising the state’s top environmental organizations, the renewable-energy leaders who have made Vermont a solar powerhouse, iconic Vermont businesses like Ben & Jerry’s and Seventh Generation, the state’s low-income weatherization agencies, interfaith religious leaders, and academics at U-Vermont’s Gund Center for Ecological Economics. Non-member allies of Energy Independent Vermont include the Vermont Council on Rural Development and a CERES-supported group of industry leaders including Sugarbush Resort, Burton and King Arthur Flour.

The campaign engaged Regional Economic Models, Inc. (REMI) to conduct an analysis of a pollution tax set at $100 per metric ton of CO2, with 90% of revenues recycled as cuts to the state income tax, corporate taxes and a reduction in the sales tax, and the remaining 10% reserved for low-income weatherization and other energy-saving investments. As modeled, the tax would exempt electric generation, since that is already covered with a carbon pricing regime through RGGI, the Regional Greenhouse Gas Initiative. The REMI study concluded that over the first decade this measure would cut carbon emissions from heating and transportation by 31% while generating 2,400 new jobs, raising gross state domestic product by $100 million, and adding more than $150 million a year to real disposable personal income.

Two bills with similar tax rates and revenue treatment were introduced in the Vermont General Assembly in early 2015, according to Hughes. Energy Independent Vermont delivered 25,000 petitions in favor of carbon pricing to Vermont legislators in November 2015, he reports. In January 2016 Gov. Peter Shumlin’s administration called for the state to “investigate and pursue options for market-based greenhouse gas emission policies.” A May 26 piece by Energy Independent Vermont activist Luc Reid in the Williston (VT) Observer, The unsuspected upsides of a carbon pollution tax, did a nice job of laying out the “income progressivity” of EIV’s carbon tax proposal. 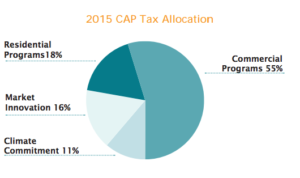 The municipality implemented the United States’ first tax on carbon emissions from electricity, on April 1, 2007, at a level of approximately $7 per ton of carbon dioxide. According to the City of Boulder, the tax was costing the average household about $1.30 per month, with households that use renewable energy receiving an offsetting discount. The city expected the tax to generate about $1 million annually until its expiration in 2012, with the revenues used to fund Boulder’s climate action plan to further reduce energy use. In June 2009, the City Council voted unanimously to raise the tax level. Although the new rate was not originally specified, the expected increase in revenues, some $810,000 annually,  suggests that the increase is on the order of 80%, or perhaps $5-$6 per ton of CO2 (on top of the original $7/ton). In 2012, residents voted to continue the tax at the 2009 rate for another five years.

Please send us (info@carbontax.org) your reports, or even just ideas, on state-level carbon taxes, so we can post them here.

(coming soon: Utah, drawing on this link and that link)