In A Convenient Windfall: Global Warming’s Big Cash Dividend, published on March 23, 2007 at www.commondreams.org, Peter Barnes makes the excellent points that “we need to make polluters pay for fouling the atmosphere” and that “we’ll earn an enormous cash windfall if we fight global warming the right way.” Unfortunately, his “right way” is a cap-and-trade program.

As Barnes acknowledges, polluters are arguing that they should receive future carbon emission permits free of charge to avoid being hurt by a cap and trade program. In fact, they have received free allowances under existing cap-and-trade programs for NOx and SO2 and they have good reason to expect that they will receive free allowances if there is a carbon cap-and-trade program. Barnes is correct that “there’s real-world evidence that privatizing the climate windfall would be a serious mistake” and that when the European Union gave out free carbon emissions permits to coal-burning utilities, “the undisputed results were windfall profits for the utilities, higher prices for everyone else, and zero public benefit.”

Barnes concludes that the permits should be auctioned rather than given away. The danger is obvious. When it comes to making deals in Congress, the coal-mining companies and the companies burning coal have tremendous clout and the inevitable result will be a cap-and-trade program with the allowances given to the polluters along with the cash windfall.

The good news is that we really can earn an enormous cash windfall by fighting global warming the right way. That right way is by implementing a carbon tax, which is superior to cap-and-trade programs for all the reasons set forth in our issue paper on Carbon Taxes vs. Cap-and-Trade.

Close to 150 Congressional staffers, policy types and lobbyists jammed a Senate hearing room yesterday for a briefing on carbon taxes and cap-and-trade systems featuring CTC’s Charles Komanoff, along with Terry Dinan of the Congressional Budget Office and James Barrett of Redefining Progress. 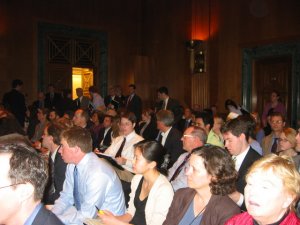 The briefing was sponsored by the Environmental and Energy Study Institute. Attendance at EESI briefings generally runs between 75 to 100, and the packed house for the March 14 panel was taken as a sign of surging interest in carbon pricing.

Charles’s presentation may be accessed here. It’s an updated and more concise version of the PowerPoint on our Home Page.

This post was contributed by Kevin Bell of Convergence Research, specialists in energy, water and transportation technical and policy analysis. — CTC

As yet another case of cowboy diplomacy on the part of the Natural Resources Defense Council and Environmental Defense recedes in the rear-view mirror, it’s important to look ahead to what is at stake here.

In a little less than two years, our current Federal executive branch will be replaced. Chances are that for the first time, we will see serious movement (as well as serious posturing) on a Federal level about limiting greenhouse emissions. The problem is that the stakes are enormously high, and the window of opportunity for doing something that will actually make a difference is very small — less than a generation, probably less than a decade. We don’t get a mulligan if we blow this.

Many of our nation’s most polluting industries are acutely aware of this political calculus, and are moving to get in front of the issue. The first effort out of the gate is the US Climate Action Coalition. In addition to NRDC and ED, it includes perennial favorites like PG&E, Duke Energy, FPL, Caterpillar, GE, BP, Alcoa, and more.

Now, all of these corporations are looking for policy certainty before making infrastructure plays that they will have to live with for most of this century. Some of them buy into the idea that climate change is the single biggest threat that we as a species face in this next century, and that we need to act like it (I would put BP in this category). Others are simply looking for a way to make a financial killing, or evade having to actually do very much. Of course, every party in this coalition intends to dominate the debate over how we actually go about substantially reducing greenhouse gas emissions in the United States.

So, what are they calling for? Their twelve-page “solutions-based” PR piece, A Call for Action, is long on rhetoric and short on specifics. But the specifics that are there should make you sit up and take notice.

The short-term and mid-term suggested target reductions, not to put too fine a point on it, are lame: 10%-30% reductions from current levels by, oh, around 2025. To put that in context, California plans to reduce emissions 15% from current levels by 2020, and 80% by 2050. The UK committed to 20% reductions below 1990 levels by 2010 a decade ago (they will probably get close to, but not quite hit that target). Both the UK and Germany have committed to further reductions on the order of 40% by 2025 if — and this is a very important if — the US makes a similar commitment.

But the “money quote” is in the discussion on mechanisms on page 8. Rejecting the idea of a uniform carbon tax out of hand, the report outlines a cap-and-trade solution and then says:

A significant portion of allowances should be initially distributed free to capped entities and to economic sectors particularly disadvantaged by the secondary price effects of a cap including the possibility of funding transition assistance to adversely affected workers and communities. Free allocations to the private sector should be phased out over a reasonable period of time.

A few days ago I was asked to elaborate on why implementation of the Clean Air Act and the failure of Phase One of the European Carbon Exchange are great examples of how to do the wrong thing with mitigating carbon.

Briefly, the biggest mistake of the Clean Air Act was exempting existing coal-fired powerplants from best available control technology rules. Originally seen as a temporary concession to dirty utilities with obsolete powerplants near the end of their useful lives, it has become a permanent fixture of the emissions landscape, killing hundreds of thousands of people and wasting the time of brilliant advocates that would have been far better spent dealing with issues like climate change. Grandfathering is a terrible idea. There is no chance, politically, that such a concession would “be phased out over a reasonable period of time.”

Furthermore, the decision to give sulfur dioxide credits away to polluters, instead of going to a 100% market-driven auction system, represented a huge subsidy (and another terrible precedent) for the nation’s dirtiest utilities. Make no mistake, this is the deal that NRDC/ED’s partners in USCAP are aiming for.

Phase One of the Euro Carbon Exchange failed for two reasons: each country was allowed to make its own estimate of its greenhouse emissions, and tradable carbon credits were given, for free, to the industries in each of those countries. The three countries that actually underbid (UK, Spain, Slovenia as I recall) had to actually pay. For the rest of the Eurozone, it was free money right up to the point where everybody realized that the market was awash in surplus carbon credits, and the price dropped by 95%. They did learn a lot about how much carbon each country actually generates, and Phase Two should be tighter. But less than 10% of the available credits in Phase Two will actually be in open auction.  Once again, the vast bulk of credits will be given away to polluting industries, something that my sources in the UK government describe as a straight-up political power play by Europe’s largest corporations.

That’s the reality we’re all up against as we start to gear up for the critical fight to reduce global warming. What is troubling is that NRDC and ED have already signed onto Alcoa’s and Duke Power’s position on climate change, before the real discussion has even started.

For better or worse, NRDC and ED are the go-to national environmental organizations that corporations want to talk to. Occasionally the outcome has been positive. More often the result has been catastrophic. But always NRDC and ED seem fixated on a style of cowboy diplomacy that forecloses a substantive and genuinely progressive outcome, often for years to decades.

We don’t have years to decades to get this one right. I really, really hope that NRDC and ED don’t end up being part of the problem.