“Our grandchildren will blame us if we destroy the remarkable planet that we inherited,” warned renowned climate scientist James Hansen today at the 40th anniversary celebration of Earth Day on the National Mall in Washington, DC.  Dr. Hansen, awaiting the imminent birth of a grandchild (his 4th), is keenly aware of the threat that potential human-made climate chaos poses to her generation and all who will follow.

We live in a “false economy” of cheap fossil fuels whose prices don’t reflect their true costs to society, the environment and future generations.  “As long as coal is so cheap that low-carbon energy can’t compete, we will not make the transition to a clean-energy future,” Dr. Hansen said. 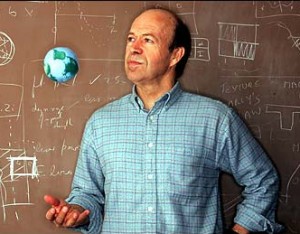 Dr. Hansen, director of the NASA Goddard Institute for Space Studies, spoke on this policy-related topic today as a private citizen.  He called on the public and lawmakers to reject the “smoke and mirrors” of energy bills now before Congress, which rely on “cap-and-trade” and “offsets.”  “We need a bill designed for the public, not for big banks and fossil-fuel companies,” Dr. Hansen said.

His proposal calls for a “simple, honest” carbon fee, collected from fossil-fuel companies upon the first sale at the mine, wellhead or port of entry.

The money collected via this fee would be distributed to the public as a monthly “dividend” or “green check.”  Distributing all of the revenue equitably to households will ensure that families can afford the energy they need during the transition to a clean energy future, and it should help win public support for a rising carbon fee.

Dr. Hansen’s proposal was produced after months of discussion with religious leaders, the Carbon Tax Center, Citizens Climate Lobby and the Price Carbon Campaign.  It incorporates key elements of bills proposed by Congressmen John Larson (D-Conn) and Bob Inglis (R-S.C.), whom Dr. Hansen calls on to join forces for the benefit of American people in building an effective, bipartisan “Climate Stewardship Act.”