While the mainstream press lamented the COP15 stalemate, and delegates struggled through the night to spin their impasse over “targets” and “verification” into some semblance of progress, the scene was harmonious, even jubilant at Klimaforum, the “people’s climate summit” near Copenhagen’s main train station Friday night.

Klimaforum negotiations coordinator Mathilde Kaalund-Jørgensen proclaimed to a standing room-only audience in the main auditorium that she had been admitted to the Bella Center (off limits to most non-governmental organizations since Wednesday), only to sit through hours of “very boring” speeches by heads of state, droning on about “urgency” and “binding targets.” The UN granted Mathilde just two minutes at its plenary session to introduce the Klimaforum Declaration. The consensus Declaration calls on industrialized nations to recognize and begin to pay their “climate debt” for the Earth’s accumulated greenhouse gas pollution that is already raining destruction and death disproportionately on developing nations. The Declaration rejects carbon trading, carbon markets and offsets as false solutions and perhaps most importantly, includes a clear call for a transparent carbon tax with revenue returned to the people. 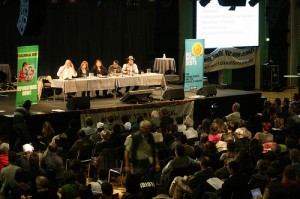 After Mathilde’s remarks, Klimaforum closed with a rollicking, diverse celebration, including latin, kletzmer, waltz and folk music, dance and some good laughs. One musician played an impressive solo on an oboe he’d “up-cycled” from a plastic drinking straw. A speaker warned against cynicism and its evil twin, complacency; both block action and engagement. We are all products of an unbroken chain of millions of successful ancestors, he reminded us, who, at least for a moment, felt warmly about their mates. He pointed out that we each carry within us their accumulated success in adapting, cooperating and surviving. The Danish activists who had organized and obtained funding and space for the Klimaforum handed off the effort to a new team already planning an alternative summit at COP16 in Mexico City next year. “The people must lead” they said, “We will not wait for the so-called leaders.”

An apt ending to a week’s searing contrasts between pallid UN events and the lively and productive Klimaforum. Here’s how it went for me.

For the first week and a half of COP15, I divided my time between UN events at the Bella Center and the Klimaforum. While the plenary sessions were grinding along, the UN side events offered a wealth of information and occasional inspiration: British Columbia Premier Gordon Campbell was congratulated for enacting North America’s first revenue-neutral carbon tax which led in May to his comfortable re-election. The German government detailed ambitious plans for 95% reductions in GHG emissions by 2050, pointedly including a scenario in which carbon capture and sequestration turns out not viable. And at a session on monitoring, reporting and verification (MRV) of GHG emissions, I annoyed representatives of big accounting firms by pointing out that their Herculean (and lucrative) business plans to establish baselines and monitor GHG emissions would be unnecessary under a simple upstream carbon tax.

The dynamic shifted on Wednesday. I had planned to go to Bella Center for two side events in the morning and then head to Klimaforum for an afternoon presentation on carbon taxation. I had obtained the secondary credentials the UN was using to limit the number of attendees. On the Metro to Bella Center, delegates were ordered off at the Sundby station half a mile before the center. We marched through half-a-dozen police checkpoints between dozens of idling vehicles containing barking and snarling police dogs and lines of heavily armed police. From some points, we could see and hear throngs of protesters. They had planned a symbolic meet-up uniting supportive delegates inside Bella Center with those approaching from the outside. I saw a troupe of Latina women dressed as ears of corn nearly run down in mid-dance by a police van charging at full speed. Their corn husks crunched against the van as the women dodged, barely avoiding injury.

At the final checkpoint, in line to enter Bella Center, we were serenaded by Bob Marley tunes from a PA system powered by pedalling activists. I waited with two delegates from India. Their take: “Flopenhagen.” Inside Bella Center, guards scanned my credentials. The computer rejected me, and I was brusquely escorted by police armed with Glock 45’s out to the perimeter where the Marley tunes were still playing. Meanwhile, protestors were massing outside the gates; we could hear police yelling at them.

After taking a last look at the spectacle from Sundby station, I headed back to Klimaforum, where I met Friends of the Earth delegates who had also been locked out of Bella Center. FoE had elected not to participate in the demonstrations and try to work within the UN process instead, but it and many other NGOs were excluded anyway. They felt cheated, but also appeared glad to be on the “right side” of the new line between UN insiders and outsiders.

I arrived early to the Klimaforum presentation, Carbon Taxation – A forgotten climate policy tool, by Global Utmaning (Global Challenge), an independent Swedish think-tank. I was glad to meet presenter Carl von Essen who had contacted the Carbon Tax Center about our common pursuit of transparent, predictable carbon pricing. We chatted for a few minutes; he seemed very pleased to meet a rep from CTC. Their presentation was thorough, clear and well documented, covering the advantages of direct carbon pricing in reducing emissions and encouraging alternatives. Von Essen and his colleagues pointed out in countries where carbon revenue has been used to reduce other taxes, such tax shifting has produced economic benefits.

During the Q&A, I congratulated Global Utmaning on a terrific presentation and noted the excellent attendance (150 people packed the room). I mentioned our concerns with cap-and-trade: markets, traders, offsets, lack of clear price signals… and invited listeners to a discussion that I had arranged in the nearby “meshwork” area. Eight enthusiastic participants engaged for over an hour in a very substantive discussion about carbon pricing, including nitty-gritty details like border tax adjustments and ways to make the net effects of carbon taxes income-progressive. (Carl and his colleagues had headed for the Bella Center to try to make a similar presentation there.)

Last week I also attended two Klimaforum sessions featuring prolific and influential Guardian columnist George Monbiot. He decried policies that increase supply of both fossil fuels and alternative energy without reducing demand for fossil fuel energy. He’s especially critical of Canada’s plans to unleash the dirtiest fossil fuel: tar sands. I treated him to tea and we had a few minutes to chat. I told him we agreed on the need to reduce energy demand and mentioned our recommended tool: carbon taxes with revenue recycling. “You’re pushing on an open door,” he said encouragingly. At his session later in the week entitled: “Are you getting the climate agreement you came for?,” Monbiot mentioned climatologist Jim Hansen’s trenchant critique of cap-and-trade and called on me during a comment period. I explained some of the flaws of carbon trading and suggested a direct carbon pricing system. Later, Monbiot picked up the point, explaining that a carbon tax is a way to reduce demand for fossil fuels and put alternatives on a stronger footing. Perhaps he’ll adopt revenue-neutral carbon taxing as a future talking point. (Click here for Monbiot’s bristling valedictory from COP15.)

What does it all mean? Like so many, I came to Copenhagen with a vague hope for a “fair and binding” agreement. I now question whether that was even a good framework to begin with. “Fair” now seems to point toward an endless struggle over allocating rights to emit carbon; and “binding” to incessant legal wrangling over monitoring and enforcement. In contrast, Klimaforum showed that leadership doesn’t have to come from the top, whether the UN or our so-called leaders. And sadly, the UN showed that it won’t.

What’s a better framework? How about one major trading bloc (e.g., the European Union or the U.S.) setting a steadily-increasing carbon tax? That would create pressure for others to follow, as the carbon-taxing countries collected (and kept) the laggards’ carbon taxes for them at the border. In effect, penalize the laggards while offering a bounty of tax revenue for those that join. The only international agreement needed — if at all —  would be that every country will enact a carbon fee, along with clarification of World Trade Organization rules on border tax adjustments. Nations don’t even need to agree on the same carbon tax rate, since individual countries’ rates can be harmonized at the border.