Two Senators reached across party lines and today introduced a climate bill that would limit carbon trading, return 75% of permit revenues to households, and close the giant “offsets” loophole in both the Waxman-Markey bill passed by the House in June and the Kerry-Boxer bill now stalled in the Senate. With its fresh, “cap-and-dividend” architecture, the bill might stimulate Congress to consider alternatives to the embattled cap-and-trade approach.

While the Carbon Limits and Energy for America’s Renewal (CLEAR) Act was largely written in recent months by Sen. Maria Cantwell (D-Wash.), its co-sponsorship by Sen. Susan Collins (R-Maine) is noteworthy because bipartisan support will almost certainly be needed to win the 60 votes required for passage. 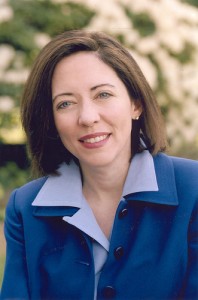 According to a press release and fact sheet from Sen. Cantwell’s office, the CLEAR Act will:

Energy producers would bid in monthly auctions for “carbon shares.” According to the Cantwell statement, the bill “provides businesses and investors with a simple, predictable mechanism that will open the way to clean energy expansion while achieving America’s goals of reducing carbon emission[s].”

People are moving more toward something that’s much more streamlined. The bottom line is you don’t want to have added volatility to the market when trying to solve [the emissions] problem. … What you want is a predictable price so that people can move forward and diversify. (no link, since subscription required)

The Cantwell-Collins bill differs from Kerry-Boxer and Waxman-Markey in important respects:

Still to be determined, however is how the limits on permit trading will interact with large energy users’ interest in hedging against the inevitable seasonal and cyclical price swings. Also of concern is the low “price collar” in the bill: a range of $7 to $21 per ton of CO2 in the initial year, 2012, rising each year at approximately 6% above inflation. CTC’s Carbon Tax Impact Model (download spreadsheet via this link) suggests that the economic incentives from this price trajectory will only lead to a 7.5% drop in U.S. CO2 emissions from 2005 levels in 2020. (And 2020 emissions would actually be 1.5% greater than the likely depressed 2009 figure). Reportedly, Cantwell’s staff believe that the clean-energy investment provisions in the bill will make up the to for the 20% goal, suggesting that they view the permit mechanism more as a funding source than an inducement to cut carbon directly.

Nevertheless, the Cantwell-Collins CLEAR Act is a milestone: the first bipartisan legislation that seeks to guarantee return of most revenues to American families and to limit speculative permit trading. It demonstrates that cap-and-trade is not the only mechanism for putting a price on carbon emissions. Perhaps it will open the door to serious consideration of the “gold standard” of carbon pricing: a revenue-neutral carbon tax.