I took my first air trip in years to represent the Carbon Tax Center, the Citizen’s Climate Lobby , the Climate Crisis Coalition and the Price Carbon Campaign, and carry the message of Progressive Democrats of America: we want a simple, direct carbon pricing system with most of the carbon revenues “recycled” to households, so we can build support for a rising carbon price long into the future.

My main focus here is the gargantuan UN conference, and I’ll be reporting on it. Because I’m also interested in movement-building and alternatives, I’ve been dropping in on Klimaforum09, the “People’s Summit,” organized by NGOs and the Danish government as an alternative and complement to COP15.

We can no longer wait for politicians to finish their never-ending negotiations … Klimaforum is developing a global climate declaration expressing the hopes, ideas, and visions of citizens groups and social movements from all corners of the planet … The declaration will be finalized during the first four days of Klimaforum09 thus giving the participants a possibility to influence the [COP-15] process. [The] finished … declaration will be handed over to the political leaders at the COP15 supplying them with inspiration as to how a fair and just climate deal can be put together. Above all the declaration will be another stepping stone in building of a planetary movement for climate justice.”

On Tuesday, I attended a Klimaforum session on climate justice where Oscar Reyes from Carbon Trade Watch strongly critiqued cap/trade but dismissed carbon taxes, saying they would always be too low to do much good. Instead, he supported regulation and direct government funding of energy alternatives. I countered by explaining that recycling carbon tax revenues to households via direct payments or lower taxes on work could cushion the rise in fuel prices and make a steadily rising carbon fee or tax income-progressive rather than regressive. I noted Dr. Hansen’s support for just such a carbon fee-and-dividend, and circulated copies of his Monday New York Times op-ed essay.

Reyes seemed interested, and I was peppered with requests for more info. One was from a German journalist who knew about U.S. cap-and-dividend proposals but not about carbon taxes. I let him know that Sen. Cantwell’s cap-and-dividend proposal may be about to gain a G.O.P. co-sponsor, but I expressed concern that Cantwell’s proposed price ramp-up is too slow to incentivize the needed emissions reductions.

My next conversation was with a Danish journalist writing about the Klimaforum declaration. I described my carbon tax mission, and he introduced me to Anesha, a Klimaforum organizer, who strongly encouraged me to come to Wednesday’s session and work on the carbon tax text. Apparently no one had felt well-versed enough to do that yet.

The declaration draft impressed me with its clarity and conviction, and I went to the plenary session today, ready to make a pitch and to offer suggestions. A solo guitarist opened the session with three inspirational songs, each in a different language. His first song, “We Need You,” had this lyric: “… activists who overcome the petty details that divide them… I can tell you that we need them…” 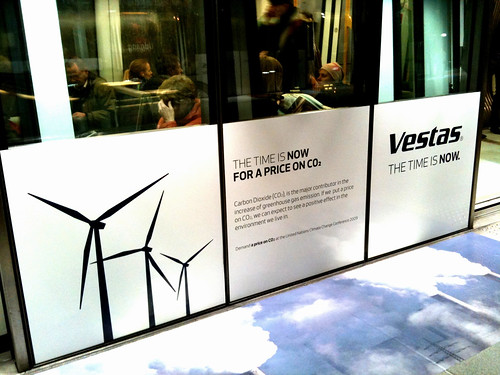 Anesha introduced me; I described our organizations’ objective of instituting carbon emissions pricing to put efficiency and alternatives on a strong footing while phasing down fossil fuels. I mentioned an ad I’d spotted on the Metro here by Vestas, the Danish windmill manufacturer that holds a large share of the world’s market in industrial wind turbines, and has erected a windmill outside the Bella Center, site of the UN conference. The ad reads, “The time is now for a price on CO2.”

I explained that without a price on carbon, “cheap” coal will continue to undercut and block financing of wind power and other alternatives. I asked my audience to put themselves in the position of someone seeking to build a wind farm. She would need to be able to show investors or a bank that sales of wind-generated power will generate the funds to pay off her wind farm. A predictably rising carbon price would be far more persuasive than a fluctuating price under cap-and-trade. I also mentioned the problem of offsets which seemed familiar to everyone, and our concerns about markets and traders. I then proposed adding italicized text to the end of the first paragraph of the summary:

Reductions of emissions must be strongly encouraged by a briskly-increasing, transparent carbon fee in addition to direct regulations to drive the phase-out of fossil fuels, while enabling safe, clean and renewable energy.

And adding to the text:

“Tax on CO2. Instead of the regime of tradeable quotas, we demand a tax on CO2, rising briskly enough to encourage the implementation of low-carbon energy with the phase-out of fossil fuels. Large portions of carbon tax revenue should be used to reduce taxes on work, in order to encourage and stimulate employment. A portion of revenues should finance a global fund to be reinvested in just and sustainable projects in the Global South.

I’m hoping that Klimaforum09 will send the UN delegates a message (or two) about the urgency of the climate situation and the need for effective policies that can be implemented quickly and widely; led by simple, straightforward carbon taxes with revenue recycled to workers and families.

Kilmaforum issued the final People’s Declaration Thursday evening.  I’m pleased that we agreed to include a provision advocating aggressive carbon taxation, reached by consensus, which reads:

Equitable tax on carbon emissions: Instead of the regime of tradable emission quotas we demand an equitable tax on carbon emissions. Revenues from this carbon tax should be returned equitably to people, and a portion should be used to compensate and contribute to finance adaptation and mitigation. This is, however, not a substitute for repayment of already accumulated climate debt. This compensation and funding should be unconditional and free of market mechanisms and financial institutions. Reduction of emissions must be strongly encouraged by a briskly-increasing, transparent carbon tax, in addition to direct regulations to drive the phase-out of fossil fuels, while enabling safe, clean and renewable energy.”

I am especially pleased that we agreed to include:

We are seeking sign-on, especially by NGOs.  Klimaforum intends to covey this Declaration to COP-15 next week.