Shapiro, a former U.S. Undersecretary of Commerce for Economic Affairs, is now founder-director of Sonecon, a Washington, DC consulting firm, and co-chair of the U.S. Climate Task Force. Shapiro spoke at the Carbon Tax Center’s December 2008 Capitol Hill briefing. This post first appeared on Sonecon’s blog, The Point, on June 2.

The House Energy and Commerce Committee’s recent approval of the Waxman-Markey cap-and-trade bill presents a crucial test for serious advocates of measures to control climate change. It won committee approval with backing from some environmental groups that have promoted cap-and-trade for 15 years, as well as industry groups representing companies that produce most of our greenhouse gases. The disappointing fact is, the bill combines the inherent problems of cap-and-trade long noted by economists, with a long catalog of giveaways and exceptions for industries now supporting it. 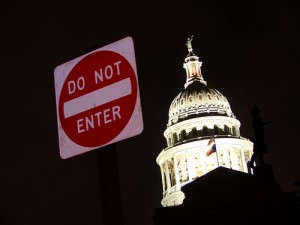 By any measure, the bill would do little to address the climate challenge. For example, the International Panel on Climate Change figures that the United States will have to reduce its greenhouse gas emissions by 2025 to 25 percent less than in 1990. The official line is that the bill would cut emissions in 2020 to 17 percent less than 2005 levels — and that comes to just 3 percent less than the 1990 levels. Moreover, the actual reductions would be even less: Greenpeace has calculated that because the bill provides “offsets” to power companies and energy–intensive industries — letting them emit more greenhouse gases so long as they take “offsetting” steps such as planting trees — its actual caps “could be met without any reduction in fossil fuel emissions for more than 20 years.”

[Ed. note: See also Charles Komanoff’s recent post in this space, Wanted: Cloudsplitter, for a disquieting analysis of the weak reduction targets in the Waxman-Markey bill.]

Or consider the bill’s implicit price for the permits to emit carbon. Climate scientists figure that a price of $50 per-ton of carbon dioxide should be sufficient to discourage people from using carbon-intensive fuels and encourage businesses to develop and adopt more climate-friendly energy and technologies. The bill, however, would end up pricing carbon dioxide at less than $20 per-ton, less than half the level needed to spur the green changes necessary to protect the climate. To make matters worse, it would give away 90 percent of the permits to the utilities and other industries that produce most of the emissions. The result, in the judgment of Carl Pope, head of the Sierra Club, is a “congressional bailout” for carbon-intensive industries, as well as a bonanza for Wall Street institutions that would happily reap windfall profits from the trading and speculation in some $1 trillion in new permits.

The bill also does nothing about the deep economic drawbacks of all cap-and-trade schemes. It has no provisions to prevent insider trading by utilities and energy companies or a financial meltdown from speculators trading frantically in the permits and their derivatives. It also ignores the basic conundrum of capping emissions when we don’t know what the demand for energy will be in any year — because we can’t predict how cold the winter will be or how fast the economy will grow. The result in every cap-and-trade system ever tried has been enormous volatility in permit prices. For example, the price of permits in the European cap-and-trade scheme moves up and down by an average of more than 20 percent per-month. Imagine that on top of normal fluctuations in energy prices, gasoline moved up or down by another 70 to 80-cents per-month. And without a predictable price for carbon, businesses and households won’t be able to calculate whether developing and using less carbon-intensive energy and technologies makes economic sense.

There’s a much better, more fair and progressive way to deal with climate change: Apply a steady tax of $50 per-ton of CO2 and use the revenues to cut payroll taxes and help average Americans deal with the higher energy prices, and to support climate-friendly R&D and technology deployment. It’s the approach long supported by Al Gore, by Jim Hansen, the NASA scientist who first drew public attention to climate change, by a growing number of environmental groups, and most recently, even by some large energy companies. Its only drawback is political: It can’t be easily gamed by powerful industry groups, and it’s not the approach a few environmental groups have used for a generation to recruit new members. With the planet’s climate lying in the balance, politics-as-usual has to give way to sound environmental and economic policy.