Washington, DC: Like moles, countless industry lobbyists popped up to beg for free allowances as the House Energy & Commerce Committee drafted the Wax-a-mole, oops, Waxman-Markey cap-and-trade bill. By the bill’s unveiling in mid-May, the moles had gobbled up an astonishing 85% of the allowance pie and were promised 2 billion tons of 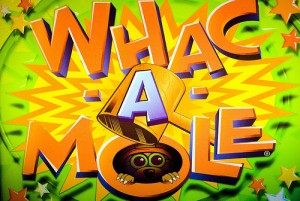 carbon “offsets,” (up to 75% from outside the U.S.) effectively postponing serious U.S. carbon reductions for over a decade while demolishing the vaunted “emissions certainty” of the “cap.”

A lion’s share (35%) of allowances would go to utilities (effectively, to coal), with other slices for natural gas companies, oil refiners, “energy-intensive” industries and the “clean coal” money pit. While the bill provides a sliver or two for low-income energy assistance and energy efficiency, it also features the Orwellian inclusion of nuclear, garbage-burning, and coal-mine waste in its  “renewable” energy handouts. Along with the allowance giveaway, the bill tosses a juicy new market for carbon allowances to the sharks on Wall Street.

Ironically, during the Waxman-Markey markup, British Columbia Premier Gordon Campbell and his centrist Liberal Party were sailing to re-election in what his opponents billed as a referendum on his revenue-neutral carbon tax. Campbell, an avowed fiscal conservative, stood firmly behind his year-old carbon tax, gaining support from many of the Province’s leftist New Democrats and Greens.

BC’s carbon tax in a nutshell:

· No allowances and no give-aways.

· All revenues distributed to households and businesses via dividends and tax cuts.

In the face of cap-and-trade’s failure to reduce emissions in the European Union, Waxman-Markey’s defenders argue that the Europeans just didn’t do it right. They gave away too many allowances, their “cap” was too loose. Did Waxman-Markey avoid those flaws? No, it scaled them up.

Cap-and-trade advocates contend that Waxman-Markey is the best our political system can deliver, implying that U.S. voters are too browbeaten to accept the inconvenient truth that building a low-carbon economy requires predictably raising the relative price of fossil fuel over alternatives and conservation. So, they say, we have to “hide the price,” build in a trove of cheap offsets and pretend that this will magically lead to reductions… later. Yet the bill’s 2020 cap is so innocuous that the 2009-2020 reduction rate in emissions implies only a 46% drop by 2050, not the promised 80%, as CTC’s Charles Komanoff pointed out in this space last week.

Waxman-Markey advocates insist this can be fixed, down the road. But as Gar Lipow pointed out in Grist last week, once a system as complex and heavily-lobbied as this is entrenched, the infestation will be nearly impossible to eradicate. Every interest that has gotten a piece of the pie — the free-allowance holders, the traders, the purveyors of offsets — will be invested in the status quo, whether or not it yields real reductions. Subsidies to the corn-to-ethanol industry (started in the name of “energy independence”) are just one example of a government program that serves no useful purpose but which will not die because its lobbyists maintain an intravenous feed of taxpayer life support.

Once Waxman-Markey is reported out of the Energy & Commerce Committee, it will be “scored” by the Congressional Budget Office for budget implications and referred to other House committees, including Ways & Means, which has been considering ways to bypass trading altogether and just set a predictable price on carbon. At more than 900 pages, it’s doubtful that anyone has carefully scrutinized the bill. Ways & Means members understand the volatility problem of emissions trading and have heard about the specter of subprime carbon, but most other members aren’t yet on the learning curve.

We have our work cut out: members of Congress need to be educated about the fatal flaws in the Waxman-Markey approach, and encouraged to consider the more transparent and effective alternatives that Ways & Means has introduced.