New York Times columnist Thomas L. Friedman has written more than a dozen columns urging U.S. leaders to enact revenue-neutral taxes on carbon dioxide. We’ve compiled excerpts and links for some of them, here. His column today, Show Us The Ball, is so forceful, as well as timely in its praise for Rep. Larson’s carbon tax bill, America’s Energy Security Trust Fund Act of 2009, that we are taking the unusual step of displaying it here in full. — CTC. Note: Emphases shown in bold are ours, as is the one link.)

Show Us The Ball

I am really encouraged by President Obama’s commitment to clean energy and combating climate change. I just have three worries: whether he has the right policies, the right politics and the right official to sell his program to the country. Other than that, things look great!

Last week, House Democrats, with administration support, introduced a 600-page draft bill on energy and climate. At the center of it is a plan to reduce greenhouse-gas emissions through a complicated cap-and-trade system. These people have the very best of intentions, but I wish they would step back and ask again: Can cap-and-trade pass? Will it really work? And is it the best strategy, with all the bureaucracy it will require to monitor, auction emissions permits and manage the trading?

Advocates of cap-and-trade argue that it is preferable to a simple carbon tax because it fixes a national cap on carbon emissions and it “hides the ball” — it doesn’t use the word “tax” — even though it amounts to one. So it can get through Congress. That was true as long as no one thought cap-and-trade could ever pass, but now that it might under Mr. Obama, opponents are not playing hide the ball anymore. 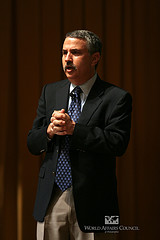 In the past two weeks, you could hear a chorus of Republicans, coal-state Democrats, right-wing think tanks and enviro-skeptics all singing the same tune: “Cap-and-trade is a tax. Obama is going to raise your taxes and sacrifice U.S. jobs to combat this global-warming charade, which many scientists think is nonsense. Worse, cap-and-trade will be managed by Wall Street. If you liked credit-default swaps, you’re going to love carbon-offset swaps.”

Some of the refrains from this song have a very catchy appeal. They could easily kill this effort. So, if the Obama team cares about the “ends” of a stronger America and a more livable planet, as much as the “means,” I hope it will consider an alternative strategy, message and messenger.

STRATEGY: Since the opponents of cap-and-trade are going to pillory it as a tax anyway, why not go for the real thing — a simple, transparent, economy-wide carbon tax?

Representative John B. Larson, chairman of the House Democratic Caucus, has circulated a draft bill that would impose “a per-unit tax on the carbon-dioxide content of fossil fuels, beginning at a rate of $15 per metric ton of CO2 and increasing by $10 each year.” The bill sets a goal, rather than a cap, on emissions at 80 percent below 2005 levels by 2050, and if the goal for the first five years is not met, the tax automatically increases by an additional $5 per metric ton. The bill implements a fee on carbon-intensive imports, as well, to press China to follow suit. Larson would use most of the income to reduce people’s payroll taxes: We tax your carbon sins and un-tax your payroll wins.

People get that — and simplicity matters. Americans will be willing to pay a tax for their children to be less threatened, breathe cleaner air and live in a more sustainable world with a stronger America. They are much less likely to support a firm in London trading offsets from an electric bill in Boston with a derivatives firm in New York in order to help fund an aluminum smelter in Beijing, which is what cap-and-trade is all about. People won’t support what they can’t explain.

MESSAGE: Climate change is a real threat to a healthy planet Earth — the only home we have. But because the worst effects are in the future, many Americans have more immediate concerns. That is why our energy policy should be focused around “American renewal,” not mitigating climate change.

We need a price on carbon because it will stimulate massive innovation in the next great global industry — E.T. — energy technology. In a warming world with huge population growth, clean power systems are going to be in huge demand. The scientific research and innovation needed for America to dominate E.T. the way it did I.T. could be the foundation for a second American industrial revolution, plus it would tip the whole planet onto a greener path. So American economic renewal is the goal, but mitigating climate change would be the great byproduct.

MESSENGER: The Obama administration’s carbon tax spokesman — the one who should sell this to the country — should be the president’s national security adviser, Gen. James Jones, not the environmentalists. The imposing former head of the Marine Corps could make a powerful case that a carbon tax is vitally necessary to stimulate investments in the clean technologies that would enable the U.S. to dominate E.T., while also shifting consumers to buy these new, more efficient and cleaner power systems, homes and cars.

He could make the case that the country with the most powerful clean-technology industry in the 21st century will have the most energy security, national security, economic security, healthy environment, innovative companies and global respect. That country must be America. So let’s stop hiding the ball and have a strategy, message and messenger that tell it like it is — and make it so.