Dingell: My Carbon Tax Bill is "Off the Table"

The carbon tax camp lost a powerful Congressional voice yesterday when Rep. John Dingell announced he was taking “off the table” the hybrid carbon tax proposal he floated last fall that featured a national carbon fee, supplemental increases in taxes on gasoline and aviation fuel, and a reduction in the mortgage interest deduction for super-large houses.

In a prepared statement, the Michigan lawmaker, who for much of his 54 years in Congress has chaired the House Energy & Commerce Committee, reiterated that “economists and other experts continue to inform us that a carbon tax is the most effective and efficient way at getting at the problem of global warming.” Dingell also noted that his on-line poll query, “Do you approve of the
idea of a carbon tax?,” earned a "Yes" from 61% of the 2,900
respondents. 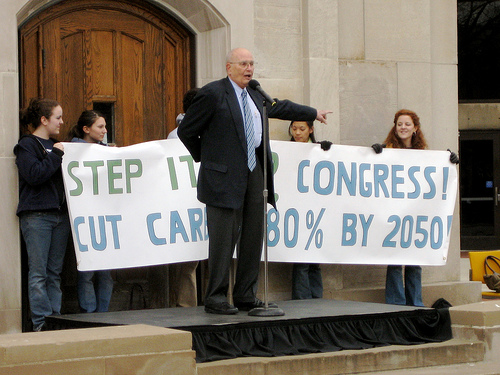 In his statement, which was first reported yesterday in The Hill, Dingell pointed to rising gas prices and the gathering recession, saying, “Times have changed; our economy has taken a hard downward turn and now is not the time for us to put any additional financial burden on the working families of Michigan or this nation.”

The irony, as visitors to this Web site know, is that a revenue-neutral carbon tax would not act as a drag on economic activity, since the return of the tax revenues to Americans via tax-shifting or dividend rebates would fully offset the higher costs of fuels and energy. Indeed, the progressive impact on incomes would make for healthier economic growth, as wealth flowed from the rich to the middle class and the poor. In a 2007 report strongly supporting a U.S. carbon tax, the conservative American Enterprise Institute pointed to the "double dividend" in which "a carbon tax can be paired with a reduction in other taxes in a manner that improves the overall efficiency of the economy."

Moreover, because the tax level would be ramped up rather than imposed all at once, any bite from a carbon tax would largely occur during the next upturn in the economic cycle rather than in the current downturn.

Citing the positive response to his carbon tax poll, Dingell emphasized that “people desperately want action on global warming.” He added, “I will continue to work on a comprehensive climate change bill that will seek to reduce greenhouse gas emissions by 60-80 percent by 2050 and will include a cap-and-trade proposal.” The Hill commented that "policymakers seem intent on avoiding any potential political fallout that could come with a big tax increase and instead favor a cap-and-trade program," omitting the fact that putting a price on carbon — which is central to both carbon taxing and carbon cap-and-trade — means higher energy prices.

Despite Dingell’s announcement, the carbon tax movement doesn’t lack for prominent supporters. These include New York City Mayor Michael Bloomberg and former Vice-President Al Gore, along with numerous scientists, economists, pundits, opinion leaders and other current and former public officials. Although Bloomberg was defeated earlier this month in his effort to enact a congestion fee to drive into the Manhattan Central Business District, he has also forcefully made the case for a federal carbon tax in a number of major addresses.

Gore continually advocates for revenue-neutral carbon taxing in his public appearances, most recently last month, saying, "Here’s the solution.
We need a CO2 tax, revenue-neutral, to replace taxation on employment, which was invented by Bismarck — and some things have changed since the 19th Century."

The Carbon Tax Center appreciates Rep. Dingell’s past advocacy for a carbon tax. We regarded Dingell’s hybrid carbon tax as a stroke of near-genius and only regretted that his proposal, along with a phase-out of the mortgage tax deduction for luxury homes, wasn’t supported by the mainstream environmental groups. We were proud to work with Rep. Dingell’s office in analyzing the efficacy of his hybrid carbon tax. Our National Hybrid Carbon Tax Model remains available to anyone wishing to analyze the carbon-reducing and revenue-producing impacts of carbon taxes.