This page, begun in spring 2019, covers the intersection of carbon pricing and other climate policy issues with the 2020 presidential campaign. We update it continually. Last update: June 11, 2019

Washington Gov. Jay Inslee used his June 11 appearance on “Democracy Now” (downloadable MP3) to demand the Democratic National Committee withdraw its threat to exclude from its forums any presidential candidate who participates in non-DNC-sanctioned debates.

Inslee addressed the DNC stance at the start of his 30-minute interview with Democracy Now hosts Amy Goodman and Juan Gonzalez (the segment begins at minute 13:00 of the program). The interview focuses, as does Inslee’s campaign, on climate change but it also ranges across related topics such as immigration, health care and economic development.

Former V-P and current Democratic front-runner Joe Biden “proposes that Congress pass a law by 2025 to establish some form of price or tax on carbon dioxide pollution, a policy championed by most economists as the most effective way to fight climate change,” the New York Times reported on June 4.

Though Biden did not specify a dollar level for a carbon tax, and a 2025 launch date appears very far off, his climate plan, which goes far beyond a carbon price, was applauded by some activists. “He put out a comprehensive climate plan that cites the Green New Deal and names climate change as the greatest challenge facing America and the world,” Varshini Prakash, executive director of the Sunrise Movement, told the Times. “The pressure worked.”

Dems: 8 out of 18 strongly for taxing carbon emissions

A year and a half out, the 2020 presidential campaign has already paid more attention to climate change than any previous election — perhaps even every previous election combined. (Bill McKibben surveyed the depressing history as part of an election preview for Politico.)

The best news of all is that voters are speaking up. In an April 2019 Monmouth University Poll of Iowa Democrats, climate change ranked second among issues of concern, albeit far behind health care. (Environmental concerns generally also ranked fairly high, which may also reflect climate concern.) The June 4 Times article cited above (re Biden) quoted a Democratic pollster proclaiming, “Climate change is an incredibly important issue for the Democratic base right now. It’s about the future, and it’s something that [President Trump] has made worse in the minds of the Democratic base.”

The candidates — well, the Democrats, anyway — are responding: 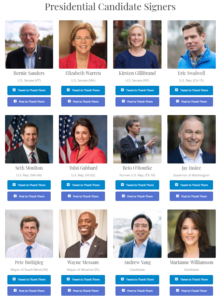 The dozen candidates shown above have pledged to campaign free of fossil fuel contributions, according to Oil Change International

Only three candidates have explicitly endorsed a carbon tax, however. Aside from Biden, Former Maryland representative John Delaney  was an original cosponsor of the Energy Innovation and Carbon Dividend Act of 2018, which largely followed Citizens’ Climate Lobby’s fee-and-dividend template. And South Bend, Indiana, mayor Pete Buttigieg made an articulate case for the same approach in an appearance on the Tonight Show (beginning at 6:15):

There’s also a plan called a carbon tax and dividend. Basically you set a price on things that put carbon into the atmosphere, but then you can rebate that back out to the American people so most of us would actually be better off if we did it. Meanwhile it would help change the economic incentives so that you’d see less activity that hurts the environment. Because the true cost is not reflected in the price of, for example, energy that comes from coal. If you were facing the true cost of it you’d have to set that price a lot higher.

Most of the field has been tiptoeing around the issue, perhaps fearing, in the words of New York Times columnist David Leonhardt, that carbon taxes “focus people’s attention on the short-terms costs of moving away from dirty energy” instead of on the benefits of clean energy.

But if they aren’t running on carbon pricing, at least some of the candidates aren’t running away from it, either. In April 2019, when the Times surveyed the announced Democratic candidates (18 at the time) on climate change, it found seven who “put their weight firmly behind a carbon tax”: Cory Booker, Pete Buttigieg, Julián Castro, John Delaney, Kirsten Gillibrand, Marianne Williamson and Andrew Yang. (Presumably, Biden has joined the ranks.)

Five others said they were “willing to consider” a carbon tax, according to the Times: Jay Inslee, Amy Klobuchar, Beto O’Rourke, Tim Ryan, Eric Swalwell.

A Climatewire story in early June examined the reticence of climate hawk and erstwhile carbon tax proponent Sen. Bernie Sanders to express support for carbon taxing in 2019. Though the story, Sanders demotes carbon taxes. Here’s what it means for Dems, leads with the Vermont senator, it finds a similar reluctance across much of the Democratic field.

His [Sanders’] 2020 presidential campaign still focuses on global warming, but gone are the regular broadsides over carbon pricing. Missing, too, is any reference to carbon taxes in the climate section of his official campaign website. Instead, Sanders has chosen to emphasize the Green New Deal when talking about climate change — a shift that underscores how much the politics of global warming have transformed in a few short years. Part of that, perhaps, is a broader decline in enthusiasm for carbon pricing among left-leaning politicians and activists.

Sanders’ shift in focus is striking. During the 2016 campaign, Sanders repeatedly hammered Clinton over her unwillingness to get behind a tax on carbon emissions. “I would ask you to respond. Are you in favor of a tax on carbon?” he asked in one debate. Later — after Clinton had sewn up the Democratic nomination — Sanders pressed to include carbon taxes in the party’s 2016 platform in part by appointing longtime environmentalist Bill McKibben to the drafting committee.

(We reported those 2016 developments in two posts, What the Sanders-Clinton Clash over a Carbon Tax Says about Democrats and Climate Change, and Democratic Platform Vote Was a Win for Carbon Taxes.)

The Climatewire story concludes with a curious but revealing quote from an advisor to Congressmember and Green New Deal spearhead Alexandria Ocasio-Cortez. “I feel we’re very locked into what we can do when we lead with a carbon tax,” says Andrés Bernal. The operative word is “lead,” as the story implies by noting that Bernal’s statement “doesn’t mean [he] doesn’t see carbon taxes as part of the equation at some point.”

Even so, any “lock-in” would be in the realm of politics, not policy. A carbon tax was never going to be a stand-alone, but rather both a market-pulling force and a pay-for, as this site has pointed out practically since its founding in early 2007, most recently in the April post by CTC policy associate Bob Narus, Green New Dealers Should Embrace a Carbon Tax.

On April 29, former Texas representative Beto O’Rourke surprised everyone by being first out of the Democratic gate with a comprehensive climate policy. His four-part plan includes:

O’Rourke doesn’t use the term “carbon tax,” but he does promise a “legally enforceable standard” for meeting the 2050 deadline, explaining:

This standard will send a clear price signal to the market to change the incentives for how we produce, consume, and invest in energy, while putting in place a mechanism that will ensure the environmental and socio-economic integrity of this endeavor — providing us with the confidence that we are moving at least as quickly as we need in order to meet a 2050 deadline.

That language seems to envision some form of carbon pricing.

The 100% Clean Energy for America Plan is the first major policy announcement in Governor Inslee’s Climate Mission agenda – a bold 10-year mobilization to defeat climate change and create millions of good-paying jobs building a just, innovative and inclusive clean energy future, with meaningful targets and plans for execution based on his experience as a governor. Governor Inslee will announce additional major planks of his detailed climate plan in the coming weeks.

All told, Inslee proposes spending $300 billion per year, leveraging another $600 billion in private investment , for a total of $9 trillion over a decade. No word yet on where he plans to get that $300 billion/year. “I have plans,” he told us at a Manhattan meet-and-greet the same day he released the proposal.

Not surprisingly, Inslee is winning the David Roberts Primary:

To put it bluntly, Inslee is writing a Green New Deal. . . . This isn’t just a campaign play, it’s a document the next Democratic president is going to want in-hand when the time comes to get to work.

Alexander Kaufman at Huffington Post also has a good summary of Inslee’s plan.

This page will be continually updated as candidates release major climate proposals.